Hebrew University professor says one state is the best option 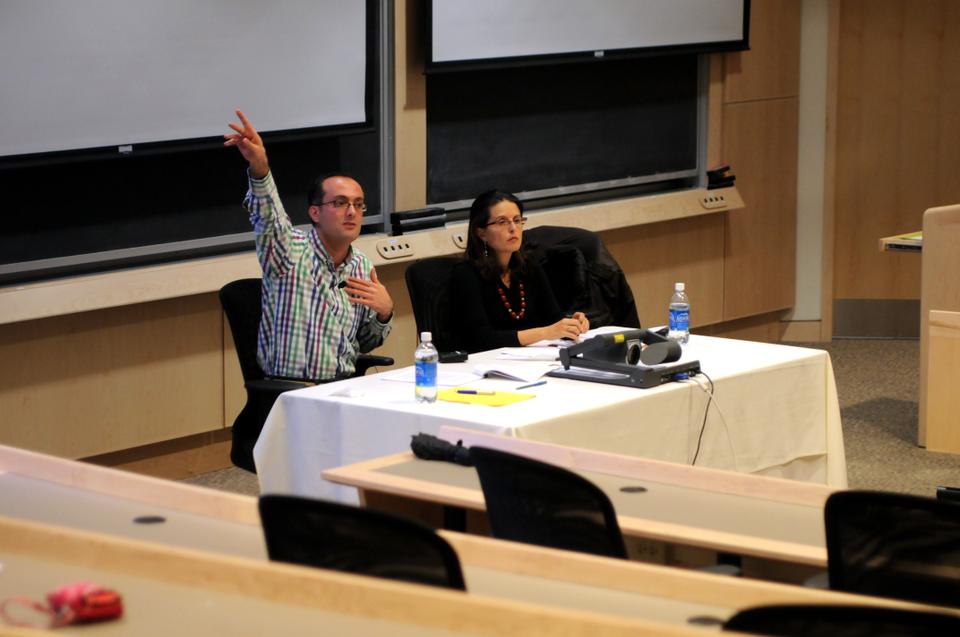 Bashir Bashir, adjunct lecturer at the Department of Political Science at the Hebrew University of Jerusalem, and Leila Farsakh, Associate Professor of Science at the University of Massachusetts, Boston speak at the Kennedy School of Government about alternatives to the partitioning of land between Israel and Palestine. Bashir and Farsakh focused on the proposal of "bi-nationalism" as an alternative that would secure national and individual rights.
By Eliza M. Nguyen, Contributing Writer

Bashir Bashir, an adjunct lecturer in the department of political science at the Hebrew University of Jerusalem, and Leila Farsakh, associate professor of political science at the University of Massachusetts, Boston, proposed a binational solution to the conflict over the division of land that comprises Israel and its occupied territories during a talk at the Kennedy School of Government yesterday.

Bashir advocated for the idea of binationalism, in which one state recognizes both ethnic groups—Israeli Jews and Palestinians—co-existing, rather than the two-state solution that is most commonly proposed.

“It is our duty to think of alternatives,” he said. “We are seeking inclusion rather than apartheid.”

Farsakh began the talk by presenting a history of the discourse surrounding the partition of Israeli land. Since the UN General Assembly’s affirmative vote on the Palestine Partition Plan of 1947, “the leadership has functioned in the statehood paradigm,” said Farsakh.

She said that political leaders do not have the will to create a two-state solution. According to Farsakh, their inaction has created more problems within the state, and they need to shift their framework of thinking in order for advancements to occur.

Bashir proposed that such advancement would happen with a binational state. In a state where lines are not drawn in ethnic terms, both parties will have collective rights along with state recognition, he said.

“The binational alternative is feasible and morally desirable,” he said.

He added that neither Palestinians nor Israelis would have to give up anything in favor of this solution, and their identities and ethnic rights would be preserved.

Despite the perceived optimism surrounding his partition plan, audience members questioned the practicality of his ideas.

In response to a question regarding feasibility, he said, “reality is posing some substantial problems.”

Jean M. Entine, a board member of Jewish Voice for Peace, said the intellectual discourse surrounding the desire to find a resolution to the conflict makes her hopeful that a compromise can be reached. But, regarding a feasible solution, she said, “I don’t think I’ve heard it yet.”

Bashir remained hopeful that politicians would support the idea of binationalism.

“We need to go beyond intellectualizing this issue. This discourse needs to go down to political activism,” he said.

He also said he hoped his talk would expose more people to an alternative solution.

“There is a desperate need to expose a larger audience to thinking outside the box,” he said.