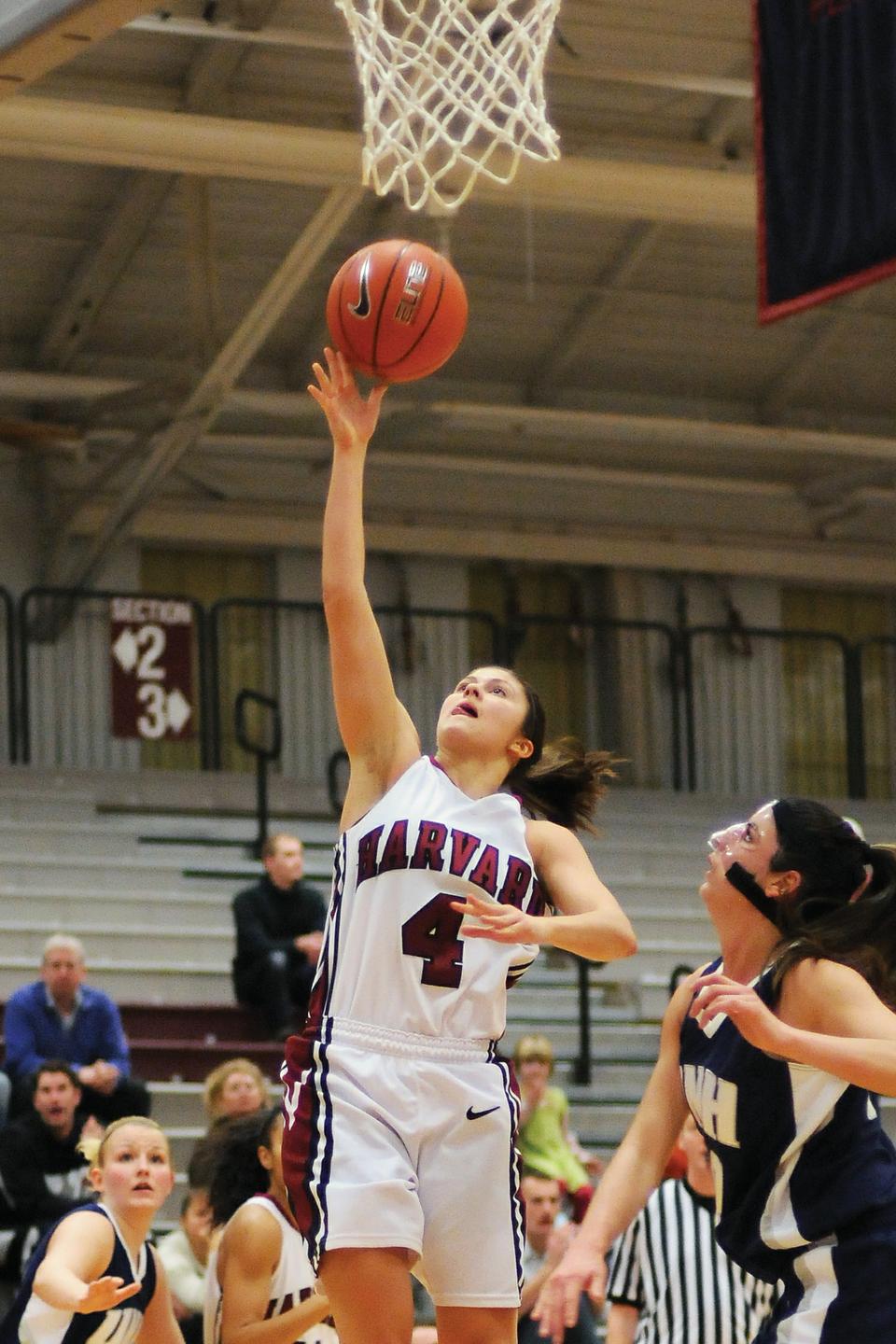 Brogan Berry finished the win with 22 points, the most any Crimson women’s player has scored in a game this season.. The junior point guard also contributed four rebounds, five assists, and four steals.
By Kevin T. Chen, Crimson Staff Writer

There’s nothing better than bouncing back from a tough loss with a blowout win.

For the Harvard women’s basketball team—which was coming off of an 86-65 loss to SEC opponent Florida last week—that was exactly what it got, as the Crimson (5-3) returned home on Friday and dismantled UNH (1-7), 96-63.

Harvard eclipsed the 90-point mark for the first time since defeating Northeastern in Dec. 2009.

“I thought it was a phenomenal offensive game,” said Crimson coach Kathy Delaney-Smith. “It was a good enough defensive game, but I want to be better than that. Our transition defense broke down a little bit, and we gave them a couple of wide-open threes that we’re not happy about.”

“[After the Florida loss], we definitely had to come out harder, whether it was on defense, offense, rebounding, whatever,” said junior point guard Brogan Berry. “We really wanted to get our confidence up, and I think this game really helped us with that. We scored almost 100 points, so our offense was great, and we outrebounded the other team, which was also a great accomplishment.”

The Wildcats kept up with Harvard in the opening minutes of the game, but an aggressive drive by Berry to the basket helped the Crimson break the contest open.

Though senior forward Emma Markley started the game 0-for-6, sophomore forward Victoria Lippert maintained Harvard’s offensive production in the paint with two post-ups to notch her first points. Markley would finish the night an underachieving 3-for-12 from the field for nine points to go along with five rebounds.

“I liked the shot selection from Emma,” Delaney-Smith said. “They didn’t go in, but those are the type of shots that usually go in for Emma; she shouldn’t be bothered. If your shots aren’t falling, you draw a double and triple team and be a rebounder. Emma’s very effective and not one-dimensional, and if she was taking bad shots, that’d be one thing, but she wasn’t. She was taking good shots.”

Midway through the opening half, a steal by sophomore guard Jasmine Evans—who crashed into press row saving the ball—got the crowd on its feet after freshman Christine Clark made a wide-open three off of the UNH turnover. Co-captain and sharpshooter Christine Matera capped off the half with an NBA-range triple from the right corner, taking the Crimson into the locker room with a comfortable 44-25 lead.

The hot shooting streak continued for Harvard in the second half as the team scored seven straight points to fend off any chance of a letdown.

An open three by UNH guard Lauren Wells got the Wildcats to within 17 points, but that would be as close as the visiting team would get. With 13:07 to go, Berry once again weaved her way to the basket, converting on a three-point play that put Harvard up, 59-31. The junior was nearly perfect in the game, finishing her night with 8-for-9 shooting for a season-high 22 points and five assists.

“Brogan was great,” Delaney-Smith said. “Her shot’s been off this year, and we’ve been working on it. It’s not anything physical, it’s just focus and strategy, but she came together tonight.”

Back-to-back three-pointers from Lippert helped the Crimson maintain a 26-point lead with 8:33 to go. From there, Clark paced Harvard to victory with six straight points, allowing Delaney-Smith to put her second team onto the court.

Clark had the best night of her young career, scoring 18 points, grabbing three rebounds, and dishing out three assists.

“I sound like a broken record, but she gets better and better every game,” Delaney-Smith said. “She’s a very athletic kid, she’s a very skilled kid. You can’t play her one way. She’s reading the defense, and that’s the adjustment that’s making her so good.”

Overall, the Crimson finished the night shooting a lights-out 64.7 percent from behind the three-point arc and 51.4 percent from the field. Harvard outrebounded UNH, 42-29, and finished the game with 19 assists and just nine turnovers.

“I love playing on my own court, and everything was going right,” Berry said. “My teammates spread the floor really nicely, so I was able to drive. It was a solid team effort with great flow and energy.”