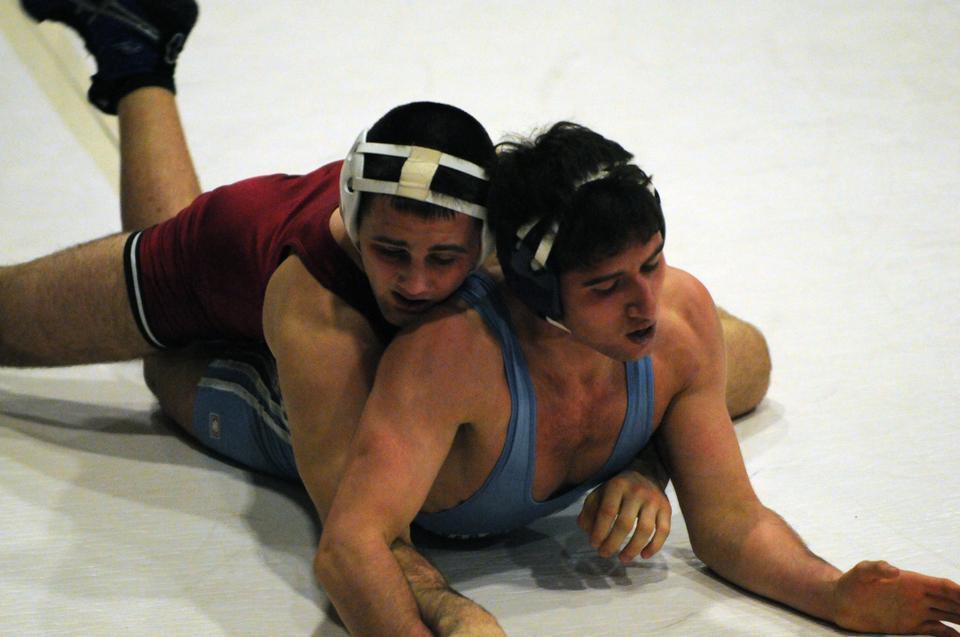 Sophomore co-captain Walter Peppelman, shown above in earlier action, finished in fourth place at the Cliff Keen Las Vegas Invitational. Teammate Corey Jantzen made it to the finals but the junior came in second place.
By Max N. Brondfield, Crimson Staff Writer

Las Vegas is certainly known for its glitz and glamour, and on a trip to Sin City this weekend, Harvard’s top wrestlers got the chance to shine. Once again taking on some of the nation’s best talent at the Cliff Keen Las Vegas Invitational, two Crimson grapplers finished in the top four as the squad approaches the end of its fall individual season.

“I think everyone did well,” junior Corey Jantzen said. “We made a lot of adjustments from our last competition, and our results definitely improved.”

Jantzen continued his tradition of strong showings in Las Vegas, finishing second at 149 lbs. The seventh-ranked grappler took home the individual title at 141 lbs. two seasons ago, and only a narrow 4-2 loss to Jason Chamberlain in the finals kept Jantzen from repeating his feat.

“His last bout was tough,” Harvard coach Jay Weiss said. “It could have gone either way, and he could have won that match.”

Still, the junior grappler was far from disappointed, as his unblemished run to the semifinals showed how far he has come after taking a year off. The transition from freestyle wrestling back to collegiate competition has forced Jantzen to work for each victory.

“I just haven’t had to wrestle much top or bottom wrestling, because in freestyle you’re mostly on your feet,” Jantzen explained. “One area where I definitely need to improve is my bottom wrestling. I need to be able to get escape points, [for example] in the finals. If I get out, I win that match.”

Although Jantzen came up short in the finals, he breezed through the early rounds in dominant fashion. The Crimson grappler rode a 19-2 win and a fall in just 27 seconds into the quarterfinals, where he edged out No. 18 Cole Schmitt of Wisconsin, 4-3. After an easy semifinal win, Jantzen had made good on his No. 2 seeding.

But the junior was not the only Crimson wrestler to compete well in Las Vegas. Sophomore co-captain Walter Peppelman (157) showed his resilience on the mat, rebounding from a second-round loss to reel off five straight victories in the consolation bracket. Peppelman fought all the way back to the third-place bout, where he dropped a 5-1 decision to Navy’s Bryce Saddoris to claim fourth overall.

“Once you get caught in the wrestleback, it’s just constant matches,” Weiss said. “I think [Peppelman] bounced back like the leader he is...He beat a number of guys, which is really going to help him wrestle with more confidence.”

After a loss to sixth-seeded Peter Yates of Virginia Tech ended the Crimson co-captain’s quest for a title, Peppelman maintained his focus in the consolation bouts. Following two easy wins and a medical forfeit, the 11th-seeded sophomore found himself challenging a higher-ranked grappler again, this time with better results. Purdue’s Colton Salazar represented Peppelman’s third Big Ten opponent in a row, but the seventh seed could not keep pace with his Harvard foe. Peppelman edged out a 5-4 decision to guarantee himself a spot in the top six, and the co-captain wasn’t done yet. Peppelman faced off against No. 3 seed Colt Sponseller in the consolation semifinals, and once again showed his potential to hang with even the most talented wrestlers. Peppelman cruised to a 9-2 upset in what would be his final victory on Saturday afternoon.

“[I just had to] focus on one match, one position at a time,” Peppelman said of his run through the wrestleback. “The coaches did a really good job of keeping my focus...It’s just a mentality and a mindset.”

In addition to the solid performances of its two standouts, the Crimson took encouragement from its continued youth movement, which saw three sophomores and two freshmen post at least one victory at the invitational.

Rookie Cameron Croy (184) had the best showing among the team’s first-year grapplers, going 3-2 over the weekend. Croy fell in his second bout to second-seed A.J. Kissel, 6-0, but rebounded with 19-7 and 4-2 wins in consolation matches. Illinois’ Tony Dallago ended the day for Croy with a 10-2 major decision, but Weiss was pleased with his rookie’s effort.

“Cameron just keeps getting better and better,” the coach said. “He was real close to placing.”

Fellow rookie Ian Roy (174) earned a win in his first consolation bout, and sophomores Adam Hogue (165) and Shay Warren (133) also picked up a victory each. Second-year grappler Steven Keith (125) faced a tough assignment against top seed and eventual champion Anthony Robles of Arizona State, but the Crimson sophomore managed a 2-2 record on the weekend.