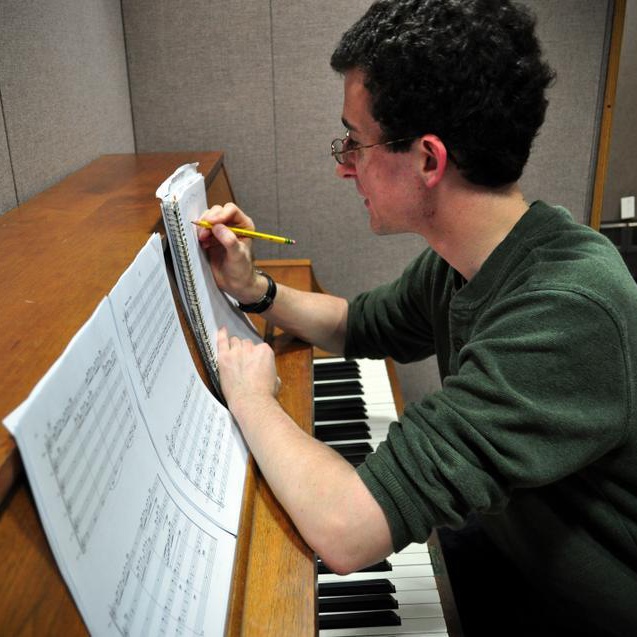 In a variation on a surrealist parlor game, a small group of Harvard students pass around a blank sheet of manuscript paper folded like a fan, each one writing a line of music without being able to read any more than the musical notes directly preceding it. After each composer has contributed to the work, someone will sit down at a piano and play whatever surprising creation the group has devised.

Creative exercises like these are but one of the many ways in which the members of the Harvard University Composer Association help foster the work of student composers. The group meets weekly to discuss each others’ work, listen to recordings, and perform public edits, thus giving members valuable artistic feedback. During Arts First Weekend, these students will have their pieces performed in front of a live stage at a concert on Saturday at Holden Chapel.

“I’m learning so much from everyone in the group.” Zachary T. Sheets ’13 says. “It’s very rewarding.”

Among these composers whose work will be featured is co-president Oliver D. Strand ’11. Strand’s piece, entitled “Lineament 1,” is a composition for flute that was created at the request of one of his friends, a student at the New England Conservatory.

Maxwell A. Hume ’10 will also have one of his works performed. Entitled “Old Photographs, New Memories,” the solo piano piece was originally created for a music course.

“I was going for a jarring juxtaposition of nostalgia and trauma within the idea of false memory.” Hume says. “I was interested in the phenomena of people having false or created memories, and these possibilities were part of the emotional framework of the piece.”

Although these composers are musicians themselves, many prefer not to perform their own compositions.

“I learn more when I hear my pieces from the audience,” Strand says. “I gather so much from their reactions—a gasp, a leaning forward—all of which are very helpful to me as a composer.”

In particular, Strand says he pays close attention to the ways that the endings of his pieces are received by the audience.

In this way, Strand is able to engage with the audience in something of a musical conversation, as repeated performances of his compositions give new meaning and direction to his work. For composers like Strand, Saturday’s concert provides yet another opportunity for creative growth.