The Changing Face of The Square 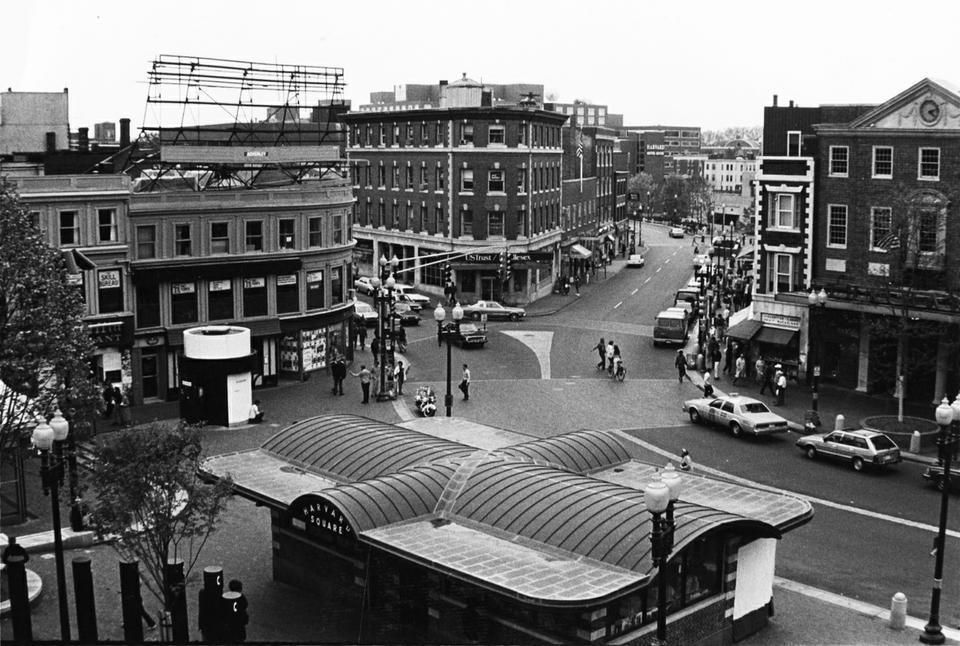 Bill Bartley, current manager of the long-time Harvard Square restaurant Bartley’s Burgers and the son of the restaurant’s founder, recalls having radically different neighbors 25 years ago. Among his neighbors were the Bow and Arrow Pub, a sandwich shop called Elsie’s, a camera store, and a tiny jewelry store—all squeezed in just between Bow Street and Holyoke Street.

“You just don’t see anything like that anymore, the kind of stores that don’t exist anymore because people don’t shop there,” Bartley said.

Today the burger joint is sandwiched between stores such as Dunkin’ Donuts and a branch of a national TD Banknorth, though several of its iconic neighbors, such as Leavitt and Peirce and the Harvard Bookstore, remain.

Over the past 25 years, Harvard Square has faced tension between maintaining the Square’s historically eclectic vibes and the demands of a modern economy.

The Square has certainly undergone a major face lift since 1985.

That year saw the rebuilding of a Harvard Square T station, following several years worth of construction to extend the Red Line into Alewife. The completed Harvard Square stop marked the end of what Bartley called a “giant hole in the middle of Harvard Square for almost five years.”

The finished station—which opened for service Sept. 7 of that year—also put an end to what State representative Alice K. Wolf calls the “dishevelment” in the area due to construction.

According to Mo Lotman, author of the pictorial “History of Harvard Square” book published last fall and long-term Cambridge resident, the subway extension was followed by a series of beautification efforts in the Square.

“[It] just changed the face of the Square literally,” he said.

But according to Wolf, the opening of Charles Hotel in 1985 “[drew] people from all over the world,” transforming the Square into a more international landmark.

“I think the 80s was kind of a turning point for the Square,” Lotman added.

Individual small businesses might not be as visible as a new T-stop or the Charles Hotel, but independently-owned stores in the Square have not yet been overtaken in numbers.

According to Denise A. Jillson, executive director of the Harvard Square Business Association, a recent survey showed that 80 percent of the 369 businesses in the Square are in fact independent. National companies account for another 15 percent, and regional chains such as J.P. Licks and Boloco make up the last 5 percent.

Both Wolf and Jillson added that they have noticed an encouraging increase in women-owned independent businesses that are much more in the vein of the Square in the 80s.

“[They’re] going back a little bit to the idea that at least some things in Harvard Square ought to be unique to Harvard Square,” Wolf said.

THE PLIGHT OF SMALL BUSINESSES

Despite these statistics, several businesses in the Square, as well as long-term Cambridge residents, have noted a continuing transformation from unique shops to a higher prevalence of national chain stores and banks.

Paul J. MacDonald, current owner of the 126-year-old tobacco shop Leavitt and Peirce, said he believes that real estate in the Square has been increasingly leased out to tenants who can pay the highest rent, rather than to those who are appropriate for the Square.

“We end up being like an outdoor mall,” he said. “This is what’s wrong with Harvard Square.”

Wolf, whose district includes much of Western Cambridge, has lived in Cambridge for over 55 years and attested to the noticeable change in storefronts away from small businesses.

“Harvard Square had very unique businesses, they had the Design/Research [store] or many different bookstores, those kinds of things,” she said. “And then came the era of many chain stores, which we still have.”

MacDonald and Bartley claim that while Harvard Square previously catered to the local resident population, recently the allocation of real estate seemed to target the needs of Harvard University affiliates instead.

“What do they want? Fast food, cell phone stores, and plenty of banks,” MacDonald said.

But Bartley argues that from what he has seen changing in his Square neighborhood, the burgeoning of national chains in the Square is not as economically viable as one might assume.

“What we’ve seen time and time again is [banks] lease [buildings] to large national companies, and [the companies] don’t make money,” he said. “People know what they want when they come to Harvard Square, and I think what was there in 1985 is more what people want.”

Bartley and MacDonald both said they empathize with small business owners who are being squeezed out of the Square, but added that the Square is still a desirable place to visit.

“I might not be crazy about what’s in the buildings, but Harvard Square is really unique,” he added.

—Staff writer H. Zane B. Wruble can be reached at wruble@fas.harvard.edu.