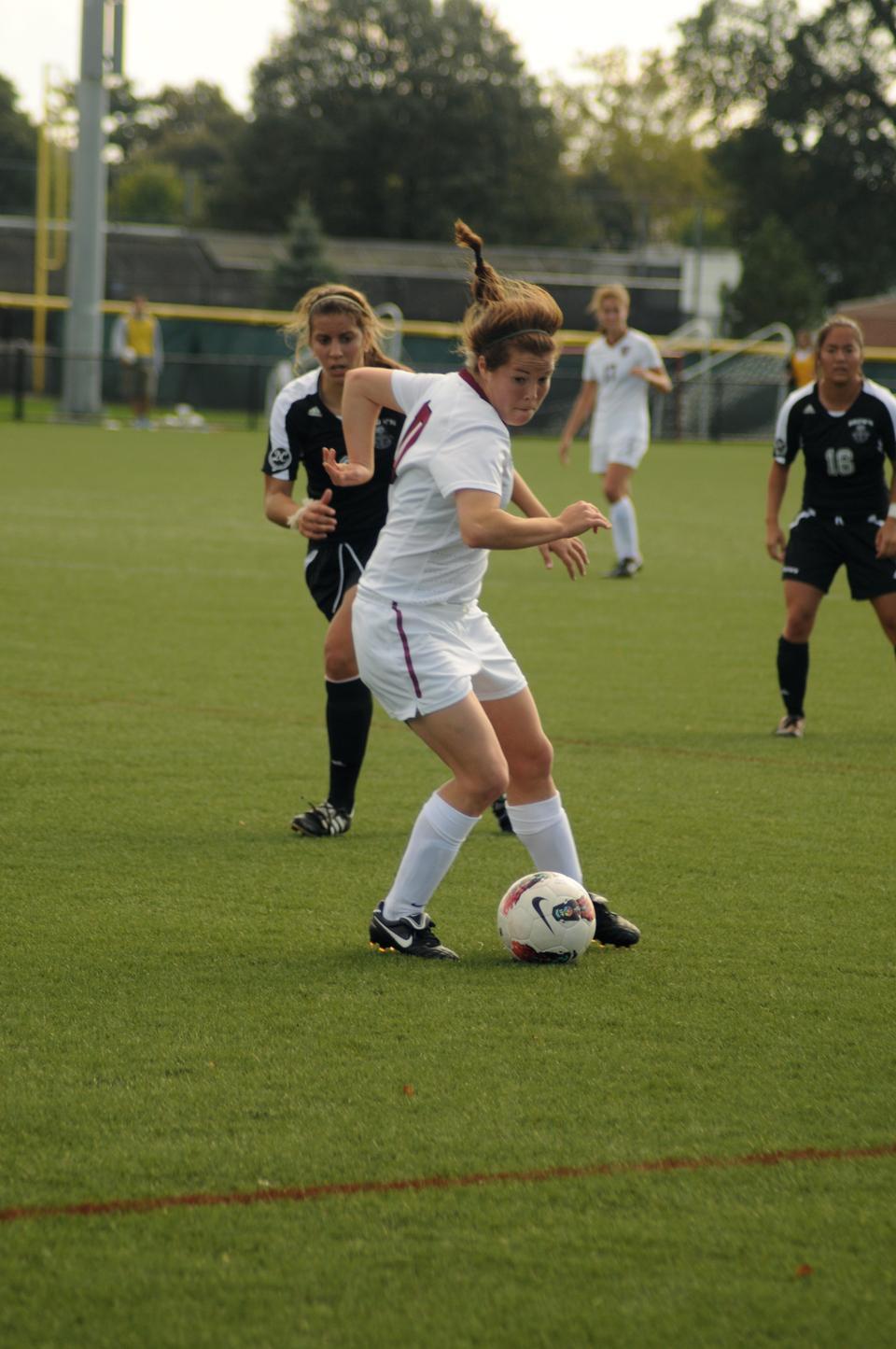 Co-captain Melanie Baskind looks to turn with the ball against Brown on Saturday afternoon. The harsh winds altered the ball’s trajectory every time it flew in the air, forcing both teams to reconsider their game plans. The visitors went into halftime with a 1-0 lead before Baskind put the first goal away and rookie Mai Le carefully placed the game-winner in the bottom right corner.
By Alex Sopko, Crimson Staff Writer

With Brown (8-4-1, 2-2-0 Ivy) only one point behind the Crimson in the Ivy League standings coming into the weekend, the Harvard women’s soccer team (9-4-1, 3-0-1) knew that Saturday afternoon’s game would be intense. Throw in brutal winds that caused uneven bounces, and this weekend’s match quickly became up for grabs.

In an exciting finish that saw two corner kicks and a free kick by the Bears within the last two minutes of play, Harvard barely managed to come out with a 2-1 win, extending its unbeaten streak to seven consecutive games.

“[Brown is] a good team—they’re having an amazing season,” Crimson coach Ray Leone said. “Lowest goals against in the league, and they’re a tough team to crack. And we didn’t crack them. It just literally could have gone either way.”

“We had a tough first half,” said rookie Mai Le, who scored the game-winner. “Brown came out and played amazing. They were unbelievable today, but somehow we managed to play together and pull out a win in the second half.”

After back-and-forth play from both sides featuring three close attempts by Harvard, the Bears scored first at the 15-minute mark. Brown junior Eliza Marshall sent a cross to teammate Kiersten Berg, who tipped it into the corner of the net to give her team the lead.

“An emotional game,” Leone added. “We really struggled today and I think it had a lot to do with Brown. They brought so much to the game. We did too, but we just weren’t playing well—we couldn’t get the ball on the ground. We just struggled with the conditions.”

Having rallied back against both Yale and Fairfield earlier this season, the Crimson took the halftime break to regroup and reevaluate.

“They’ve been here before so I really didn’t need to say anything,” Leone said. “I heard the team talking amongst themselves, and they were all positive things: it’s fine, it was a bad half, let’s move on. We didn’t even address the first half. The only thing we said about it was a comparison to last year; we played phenomenal last year in the first half against Brown and lost.”

In last year’s match, Alexandra Conigliaro, who is a Crimson sports comper, scored in the first half before Harvard allowed two Brown goals in the second 45 minutes. Hoping to do the same to the Bears this weekend, the Crimson came into the second half focused on the net.

Eleven minutes in, co-captain Lindsey Kowal placed a free kick directly in front of Brown’s goal. Deflecting off multiple players, the ball eventually found the foot of co-captain Melanie Baskind, who tied the game with a quick shot, 1-1.

Five minutes later, Le recorded her first goal in a Harvard uniform, converting a pass from Casscells-Hamby eight yards out from the goal.

“To be honest, I’m just so relieved because the team worked so hard to get the ball up the field to where I was—it was a weight off my shoulders to put it in the goal,” Le said. “I remember looking up and seeing that the defenders were closing in and that the goalkeeper was off to the side, so I did my best to put it where she wasn’t.”

Le took her time to kick a carefully-placed shot into the right corner that evaded the goalkeeper and another defender running towards the net.

Brown refused to let up the rest of the half, taking a 14-4 advantage on shots and causing anguish on the Crimson bench.

“Was it five minutes or was it 105?” Leone joked. “I think we struggled keeping the ball, so we were giving them more opportunities. They would serve a ball in there, we’d struggle to clear it and that would add maybe two or three more shots. That’s why we’re really fortunate to get out of here with this win, because we didn’t play our style at all.”

Despite the pressure, Harvard goalkeeper Bethany Kanten made a career-high nine saves to grab the win for the Crimson.

“We knew that [Brown was] going to get forward and that they were going to get after us,” Kanten said. “You’ve got to play for the moment, you can’t even think a second ahead. You can’t think about the game ending in 30 seconds or a minute—you have to focus on right now.”

With three games left, Harvard remains at the top of the Ivy League as the only undefeated team, sitting in front of Yale and Penn, who both already lost to the Crimson this season.