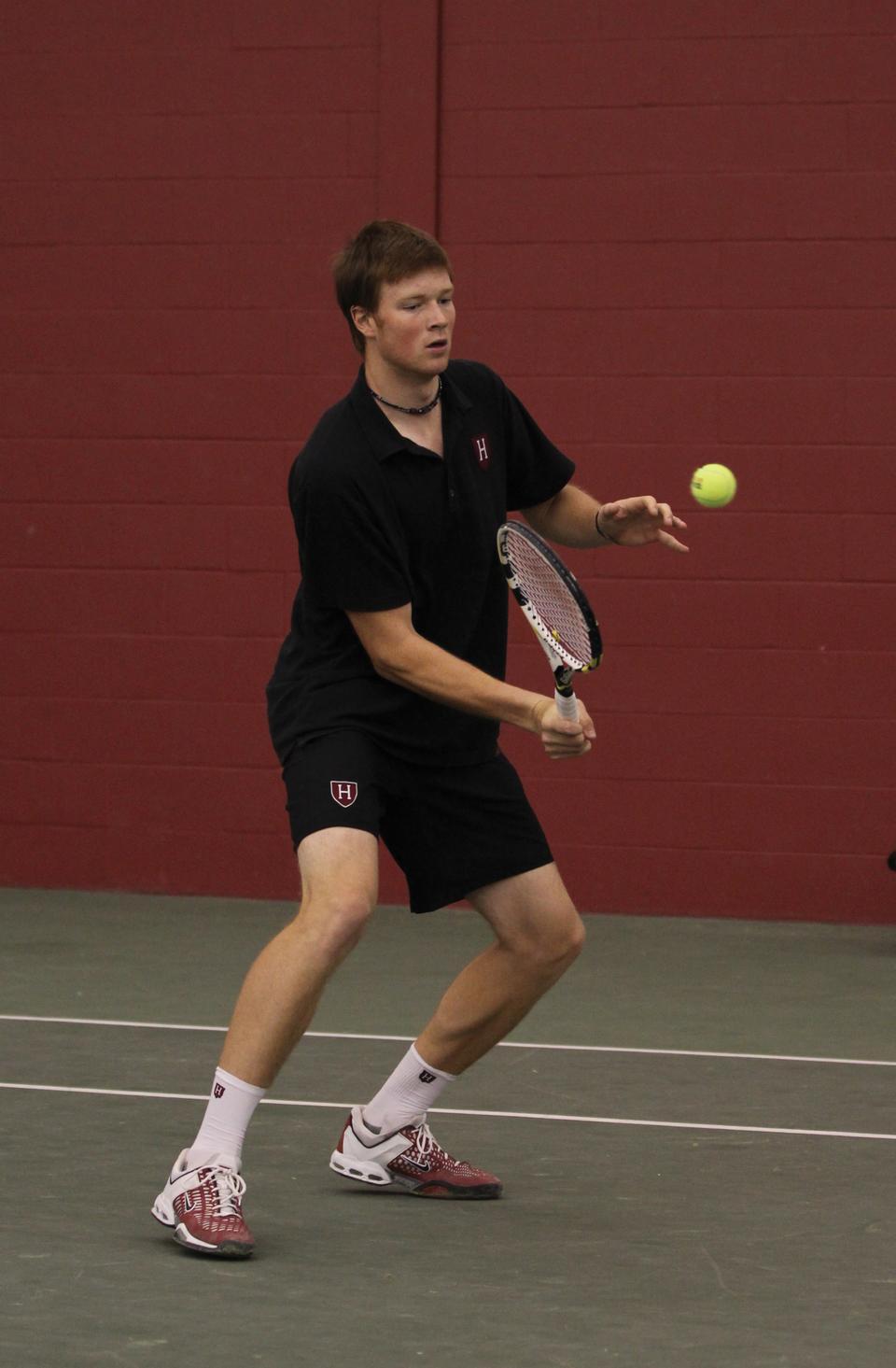 Shown here in earlier play, sophomore Casey MacMaster joined with freshman Denis Nguyen to make up the top seeded doubles team during this weekend’s Halloween Invitational, but the two fell in a walkover to Crimson rookies Henry Steer and Alex Steinroeder—who also won the Flight A singles.
By Steven T. A. Roach, Crimson Staff Writer

They may be new to the Harvard men’s tennis squad, but the Crimson’s freshmen have demonstrated that their lack of experience is not holding them back in collegiate-level competition.

At the annual Harvard Halloween Invitational held at the Murr Center this weekend, the Crimson rookies dominated in both singles and doubles play. In the Flight A singles main event, freshmen Shaun Chaudhuri, Denis Nguyen, Henry Steer, and Alex Steinroeder all reached the semifinals, setting up an all-Harvard battle in the final four.

Steinroeder came out of the draw victorious by defeating Nguyen in the final, 6-2, 7-6, in the squad’s last home match of the fall season.

Overall, the Crimson had an impressive weekend, winning all nine of its singles matches in both Flight A and Flight B of the singles draws in the first round, and clinching spots in the finals in the two singles flights and the doubles flights.

“Well it was interesting weekend, because most of the matches were played against our teammates,” co-captain Ali Felton said. “It just goes to show that the freshmen are going to be important to us this year, because they were the four semifinalists.”

Displaying impressive form throughout the event, Steinroeder dropped only one set en route to his victory this weekend.

Steinroeder routed unseeded Wes Waterman from Amherst, 6-3, 6-2, in the first round before facing off against Felton. Steinroeder clinched a three-set victory over Felton, and then recorded a 6-3, 6-4 win over Steer to earn his place in the finals.

Steinroeder almost pulled off a perfect weekend by also reaching the finals of the doubles flight paired with Steer, but the two fell at the final stage to the Dartmouth duo of John Kelly and Michael Jacobs, 9-7.

Steinroeder and Steer cruised through to the finals, winning, 8-3, in the quarterfinals and earning a walkover win against the number-one seeded Crimson pair of sophomore Casey MacMaster and Nguyen.

“Alex had a great outing this weekend,” said Harvard coach Dave Fish ’72. “He played a very fine match against Henry Steer and had some terrific points ... All of the freshmen are doing very well and improving a lot.”

Following up on his success of reaching the Round of 16 two weeks ago at the ITA Northeast Regionals,

Nguyen held his No. 2 seeding to reach the final. Nguyen too had a relatively comfortable road to the finals, beating the Big Green’s Kelly and Harvard co-captain Davis Mangham in straight sets.

Nguyen won a tight first set, 7-5, but then dropped the middle set, 6-4. Nguyen battled through a tough third set before prevailing, 6-3, to reach the finals.

Chaudhuri also had an impressive performance this weekend, winning his first two matches before falling to Nguyen. Chaudhuri defeated Chris Dale of Amherst, 7-6, 6-3, and then used the momentum to earn another victory over Tom Deighton of Brown, the lone non-Crimson player in the quarterfinals. Chaudhuri had to battle in the second set, but eventually secured the win, 6-2, 6-4.

Another big victory for Harvard came from junior Josh Tchan, who defeated No. 1 seeded Mike Hill from Brown in the first round. Tchan bested the junior in a three-set battle, 6-4, 5-7, 6-1, before falling to Steer in the quarterfinals.

Mangham and Felton, the squad’s two co-captains each won their opening matches as well before falling to their teammates in the quarterfinals. Felton beat Army’s Donald Van Velzer, 6-3, 6-3, and Mangham edged past his opponent, Alex Van Velzer, 6-4, 6-4.

In the Flight B singles draw, freshman Brandon Parker also reached the final, but pulled out of the final.

In the first round, Parker battled back from a set down against Jacobs, but eventually pulled out the win, 6-7, 6-2, 6-3. Parker continued his dominance in the quarterfinals and semifinals, taking down Army’s Pete Williams and Brown’s Nick Newhouse in straight sets.

In the doubles flight, the pairs of MacMaster and Nguyen and Felton and Chaudhuri, the No. 1 and No. 2 seeds respectively, each won their opening round matches before falling to the eventual finalists.

MacMaster and Nguyen defeated the duo of Andrew Jung and Dale, 8-3. Felton and Chaudhuri continued Harvard’s dominance over Amherst, pulling out an 8-5 victory over Robert Sorrel and Waterman.