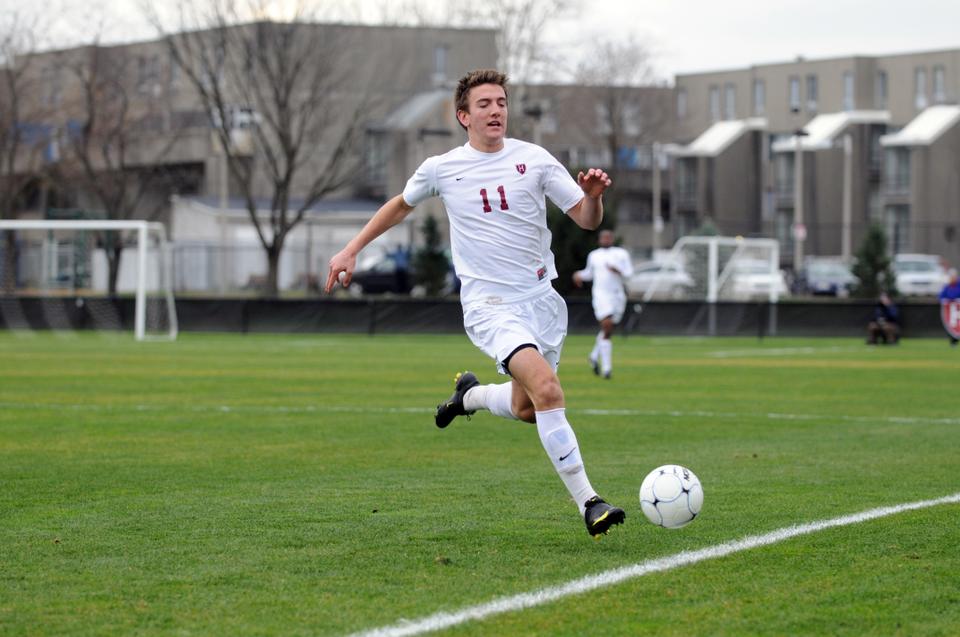 With two goals on the year, junior forward Brian Rogers paces a Crimson offense that has struggled to score early in 2010. Harvard will face Ivy League-leading Cornell in a key road test tomorrow afternoon.
By Tyler R. Kugler, Contributing Writer

The Harvard men’s soccer team will face quite the challenge this weekend as it enters its second Ivy League matchup of the season against Ancient Eight foe Cornell.

Historically known as a tough-to-reach opponent in upstate New York, the Big Red has been an even tougher squad to score on this season. In its last six games, Cornell (5-1-3, 1-0-0 Ivy) has allowed only one goal.

While Harvard (2-6-1, 0-1-0) has struggled of late, coming off of back-to-back one-goal losses against Yale and Boston University, the Crimson sees a great opportunity to emerge with a win in this weekend’s matchup.

“Last weekend against Yale, we had a slow start and this week we’ve been working a lot in practice to make sure that doesn’t happen,” junior forward Brian Rogers said. “We’re really tuned into this game.”

Rogers has been leading the attack for the Crimson with two goals, while fellow juniors Scott Prozeller and Zack Wolfenzon have also tallied a goal apiece this season.

In preparation for Saturday’s matchup, Harvard has spent the week scouting the  ins and outs of the Big Red’s defense, and is ready to break through Cornell’s recently impenetrable line.

“The coaching staff has done a great job scouting Cornell, figuring out how to break down its defense,” Rogers said.

The Crimson is focusing its efforts on executing set plays. This season, Harvard has been on the wrong end of a 46-27 corner-kick disadvantage.

Cornell has dominated on its opponents end of the field, crossing an astounding 61 corners, compared to its opponent’s 32.

This week, the Crimson has been working in practice to remedy the issue.

“The last few days at practice, we’ve been focusing a lot on corners,” co-captain Tim Linden said. “They have a couple of really big, athletic guys, so it’s something that we know we’ll have to deal with. We’re going to try to avoid giving up as many throws in our half and corners as possible, since we know that’s where they’re going to be most dangerous on the attack.”

This season, the Big Red has been notoriously dangerous on its long throw-ins.

Cornell has combined these throws with its corners to create a strong aerial attack.

“Like every Ivy League game, [the key is] set pieces, which are always a big battle,” Rogers said. “That’s how we conceded the Yale game, on the long throw. Cornell has a long throw and they’re really dangerous on set pieces, so I think it will be key for us to stay tuned-in for the whole game and not have any mental lapses where we lose our markers and give up another set-piece goal.”

Two markers that the Crimson can’t afford to lose are Cornell forward Daniel Haber and 6’5” defenseman Patrick Slogic. The sophomore duo has combined for six goals and five assists this year.

Down the stretch, these two have been particularly effective at finding ways to get open, combining for three game-winning goals.

“To deal with those players, we’ll put a guy on them, and it’s his responsibility to block his runs and make things as difficult as possible,” Linden said. “It really comes down to each man being personally responsible for his mark.”

In the nine games that Harvard has played this season, its defense has consistently stymied its opponent, allowing an average of only one goal per game. Harvard keepers Austin Harms and Brett Conrad have registered a combined three shutouts thus far.

Harms (18 career shutouts) will be looking to make history this weekend, as he is one clean sheet shy of tying Chris Johnson ’06 for the school shutout record. In the last five seasons, Harvard has yet to drop a game to the Big Red. On Saturday, the Crimson will look to continue that streak on the road as Harms chases history and Harvard tries to topple the Ivy League leader.

After all, the only way to shorten the trip home from Ithaca is with a win.