BU Drops Crimson in First Round of NCAA Tournament 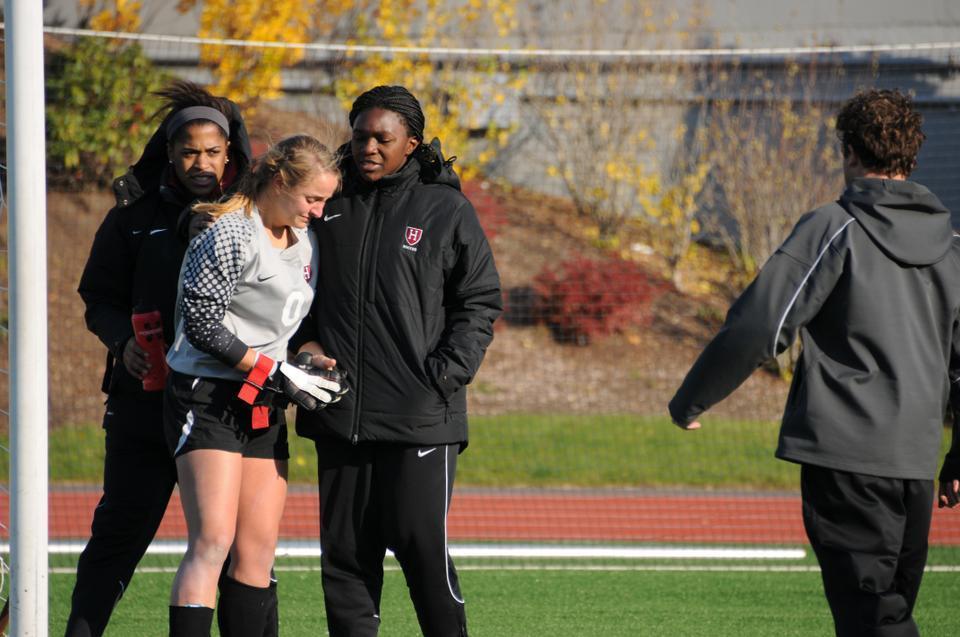 In Saturday’s first-round NCAA matchup that also served as a fight for city bragging rights, the No. 12 Boston University Terriers snapped the Harvard women’s soccer team’s 10-game unbeaten streak with a convincing 3-0 victory at Nickerson Field. The Terriers move on to play Wake Forest, while the Crimson ends the year losing to its cross-town rival with the same score as when the two squads faced off earlier this season.

“It’s really, really disappointing, that result,” co-captain Melanie Baskind said. “I thought we played very well, a hell of a lot better than the score shows. It’s an unbelievable season that we had. It’s a shame it was cut short, but we’re proud of our efforts and that’s the game of soccer.”

The Terriers found the net first after Tiya Gallegos sent a corner kick into the middle of the box. Harvard goalkeeper Bethany Kanten jumped high to grab the ball but collided with a BU forward looking for the header. With no whistle blown and the ball bouncing in front of an open net, BU’s Kylie Strom took advantage of the opportunity and put it away for a one-goal lead with a little under 18 minutes left in the half.

“As a team, we are very close, and we’ve had a good season in terms of preparation for this game because, in the Ivy League, you can never lose a game. We had to win every single game in the Ivy League in order to get to where we were,” co-captain Lindsey Kowal said. “One game and you’re out.”

Used to coming back from behind, the Crimson tried to look for the equalizer but was forced to defend more than attack. The Terriers’ high-scoring offense dampened Harvard’s efforts, as a perfectly placed cross found BU’s Ana Cuffia, who punched in the ball for her first collegiate goal.

“Going into the NCAA tournament, we were prepared for it, but of course, there are nerves coming into this type of game, so we just had to settle down,” Kowal said. “It took some time for us to get our composure and play the game that we usually play, and unfortunately, it was a little too late.”

While Harvard played defensively in the first half, the second period was a different story. The Crimson took 14 shots in total Saturday—10 of which came in the second half—while the Terriers took 12. Kanten, in her first NCAA appearance, made four saves for the Crimson.

“I am very proud of my team,” Harvard coach Ray Leone said. “We went for it, so we won’t lose any sleep over how we went out. That’s an important thing.”

“We were definitely taking it to them, especially the latter point of the second half. We just couldn’t find the back of the net,” Kowal agreed. “We had a lot of close chances, but I guess it just wasn’t meant to be. “

The visitors had close chance after close chance, including a Crimson free kick from three yards outside of the box after a Terrier knocked down Harvard’s Elizabeth Weisman. Freshman Meg Casscells-Hamby faked the shot and allowed sophomore Peyton Johnson to take the kick, but the ball flew straight into a BU player.

“Every single game we played the whole year, we were at least within a goal at halftime,” Leone said. “When you’re down two against a great team, that makes it an uphill battle all the way.”

The Terriers sealed the game with 28 minutes to go in the match, when a BU corner kick bounced off the bodies of both Harvard and Terrier players in Kanten’s box. After some confusion, the ball hit off senior Hana Tajii’s head into the net for an own-goal.

In its third NCAA appearance in four years, the Crimson remains scoreless in the postseason. For the senior class, which officially retired from collegiate soccer at the final whistle on Saturday, a goal and win in the NCAA tournament is all that has been missing.

“I just can’t say enough about the kind of kids that they are,” Leone said. “Remarkable four-year run. Three championships. The only thing that was not on our resume was winning an NCAA game, and that’s what we really wanted them to experience today. But that doesn’t erase away the excellence that they’ve demonstrated the last four years.”

“It hurts,” Baskind said. “It will definitely take a while to get over, but it will help looking back on the season we had, winning the Ivy League. The last part stings, but overall, I can’t complain. We enjoyed every day and best of luck to BU going forward.”