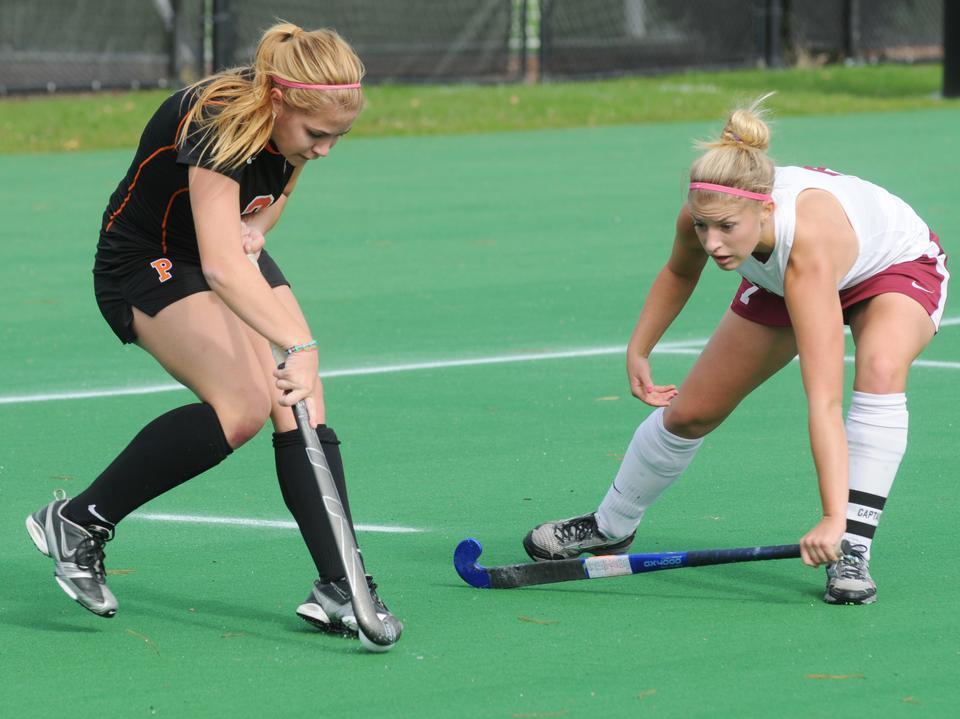 Co-captain Carly Dickson, shown here in earlier play, had a team-high three shots in the squad’s season finale at Columbia Saturday afternoon, but the veteran’s efforts were not enough to lead Harvard to its first winning season in seven years. The Crimson (8-9, 3-4 Ivy League) fell to the Lions, 3-0.
By Marina E. Watson, Contributing Writer

Harvard field hockey entered its last game of the season Friday sitting at .500 both overall and in league play.

The Crimson sought to topple the Lions and close its year with a winning record for the first time since 2004, but Columbia (9-8, 5-2) shut out Harvard (8-9, 3-4 Ivy League), 3-0, Friday evening, under the lights of the Baker Field Athletic Complex in New York, N.Y.

Despite the loss and overall losing record, the 2011 season represents Harvard’s most successful in the Ivy League since 2007, when it went 4-3 in the Ancient Eight and 8-9 overall.

“It wasn’t the result that we hoped for [Friday] night,” co-captain Georgia McGillivray said. “But I think overall, this season has been so great, and our team has grown so much from last year and the year before. We are not trying to dwell on a specific game or loss and are just focusing on ... the improvements we’ve made over the past year.”

The Crimson’s most recent success has been fueled in part by junior goalkeeper Cynthia Tassopoulos.

Tassopoulos entered the game against Columbia ranked second in the nation for save percentages (.816) and fifth in the nation in saves per game (9.25).

In the Ivy League, the junior comfortably leads the conference with 62 saves and 152 overall—six of which were made in Friday’s game.

“Cynthia is incredible,” McGillivray said. “Not only in terms of her save percentage, but also just in terms of communicating on the field and organizing defensive plays, and making sure that everyone is in the right place at the right time.”

With Tassapoulos’ guidance in net, the Harvard defense had a strong performance, holding the Lions to just nine shots on goal.

But even with the solid defensive effort and the nationally-ranked powerhouse in the net, the Crimson was unable to respond offensively.

Harvard’s defense may have been able to contain Columbia to single digits in shots on goal, but the Crimson managed just four on-frame attempts.

“We weren’t able to get all the way up into their circle and create as many shots,” Tassopoulos said.

Harvard’s inability to score would prove to be its downfall, as the Lions scored three unanswered goals on the Crimson to secure a third-place finish in the Ivy League and relegate Harvard to fifth.

The game commenced at a rapid pace. Within the first 15 seconds of play, the Crimson attacked the opponent’s circle, threatening to light up the scoreboard. But an official’s call gave the ball back to Columbia, and the Lions turned the fast-break opportunity into a hasty 1-0 lead.

“[It] was kind of a rough start,” Tassopoulos said. “But I think after that, we still kept our momentum going, and so it was kind of back and forth.”

Co-captain midfielder Carly Dickson would get a look on goal six-and-a-half minutes into the contest after connecting off a Crimson penalty corner, only for it to be stopped by Columbia goalie Christie O’Hara.

Eleven minutes into the first half, Columbia’s Gabby Kozlowski found Adriana de Vries inside Harvard territory for an easy tap-in to bring the tally to 2-0, where it would remain for the duration of the half.

“At that point it kind of neutralized to where Columbia and [we] were playing pretty evenly for the rest of the second half,” Tassopoulos said.

The Crimson returned from halftime prepared to apply some much-needed tweaks to its game.

“We came out really strong and we were ready to make adjustments,” Tassopoulos said. “And I think a lot of those adjustments did take place to where we were able to really put some pressure on them and start to get more of our offense going. It was definitely more of a game in the midfield.”

Despite its opponents halftime adjustments, the Lions edged even further ahead of Harvard by converting on a penalty corner in the second period.

The Crimson defense successfully blocked the initial corner shot, but the ball found its way to the back of the net off of a ricochet, digging Harvard into a three-goal deficit from which it would never recover.

“After [Columbia’s third goal] we were still pushing,” Tassopoulos said. “I would say it was pretty even for the rest of the game; we just weren’t able to put the ball away. We were moving in the right direction; we just kind of ran out of time.”

The season-ending loss marked the end of Dickson and McGillivray’s careers with the Crimson.

“It was a good effort by everyone on the team,” McGillivray said. “We battled hard for 70 minutes, but it just didn’t really come together for us in the end.”