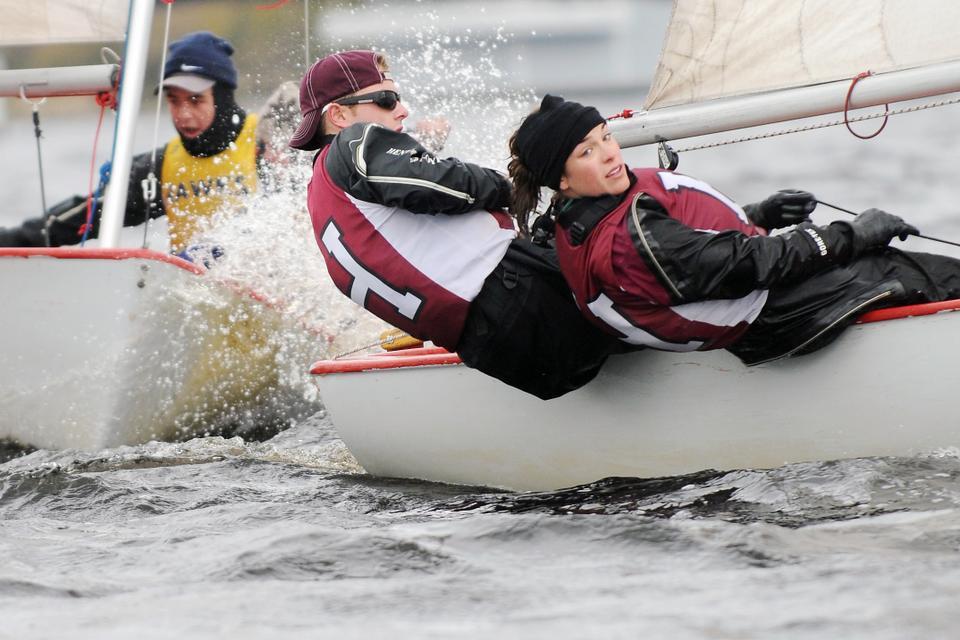 The Harvard co-ed sailing team, shown here in earlier action, struggled on its way to a ninth place at the team-racing style Hap Moore Trophy at the United States Coast Guard Academy, and in sixth place out of six teams at the Mike Horn Trophy at Harvard last weekend.
By James D. McCaffrey, Contributing Writer

For the Harvard co-ed sailing team, last weekend’s regattas provided valuable experience for the upcoming spring season, as the squad sailed out of its comfort zone to compete in a racing style that it had not had much practice with this past season.

The Crimson finished ninth out of eleven teams at the team-racing-style Hap Moore Trophy at the United States Coast Guard Academy and sixth at the Mike Horn Trophy at Harvard.

Team racing, which involves multiple boats from the same squad competing together, is different from fleet racing, in which boats are scored individually. In team racing, crews not only aim to finish in the best positions possible, but also to slow the other team and prevent them from occupying the top spots.

“Team racing is really fun and exciting, especially since this was the first team racing regatta that we had this fall season,” freshman Reid Bergsund said. “The team itself has a lot of experience, but we just haven’t been practicing a whole lot of team racing. It will be really valuable when it comes to the spring, and I’m really looking forward to it.”

Fleet racing is the dominant format of the fall collegiate sailing season, so last weekend’s team racing regattas offered a preview of what the Crimson should look out for during spring competition.

Harvard’s lack of team racing experience thus far was evident, as the squad finished towards the bottom of the pack in both of the regattas that it competed in.

Eight Crimson sailors competed in Connecticut, where Harvard finished in ninth place out of eleven teams. Tufts won the event, finishing with a 13-2 record and edging out Boston College and Roger Williams, who came in second and third place, respectively.

“College sailing is a lot more competitive than high school sailing,” Bergsund said. “I’ve loved having the chance to compete against high-level competition from schools across the Northeast. It’s been a great experience so far for me.”

The event highlighted both the most experienced members of the team as well as those newest to the collegiate sailing scene, as the Crimson squad was composed entirely of seniors and freshmen. Co-captain Brendan Kopp, senior Emily Lambert, and freshman Gram Slattery skippered for Harvard, while co-captain Alex Jumper and fellow senior William White, who is also a Crimson editor, took time at crew for the Crimson. The freshmen trio of Bergsund, Brian Drumm, and Michael Drumm each had the opportunity to compete as both skipper and crew in the Hap Moore Trophy.

In the first round-robin races on Saturday, Harvard defeated Coast Guard, Columbia, and Saint Mary’s, but lost races against Boston College, Roger Williams, Tufts, Brown, Connecticut College, Navy, and Vermont. With a 3-7 record, the Crimson qualified for the Silver fleet, which featured the bottom five performers from the initial round robin competition.

The team fared much better against these teams, avenging its loss to the Camels, and again defeating the Coast Guard Academy and the Lions.

Harvard lost only to the Seahawks to garner the ninth place finish, but the team didn’t feel it has any reason to worry.

“It was our first team race, so we weren’t too prepared,” Kopp said. “We had a ton of freshmen switching in and out to get a feel of what the team will look like in the spring.”

The Crimson did not perform any better at the Mike Horn Trophy, as it failed to win a single race and was eliminated after the third round robin.

Harvard took sixth place out of six teams at the regatta hosted on the Charles River.

Participants competed in seemingly perfect sailing conditions for most of the regatta.

Roger Williams won the event with a record of 16-3. Tufts and Boston College rounded out the top three, finishing with 11-8 and 10-9 records, respectively.

“We’re going to try to get a lot better at that in the spring because the spring is much heavier on team racing,” Kopp said.

For now, the Crimson co-ed sailing team will focus on preparing for the Atlantic Coast Championships at by Harvard. Despite its failure to come home with a win in either of the regattas last weekend, Harvard hopes to finish its fall season on a high note.

“Next week were back to fleet racing at the [Atlantic Coast Championships],” Kopp said. “Last weekend was just a tune up.”