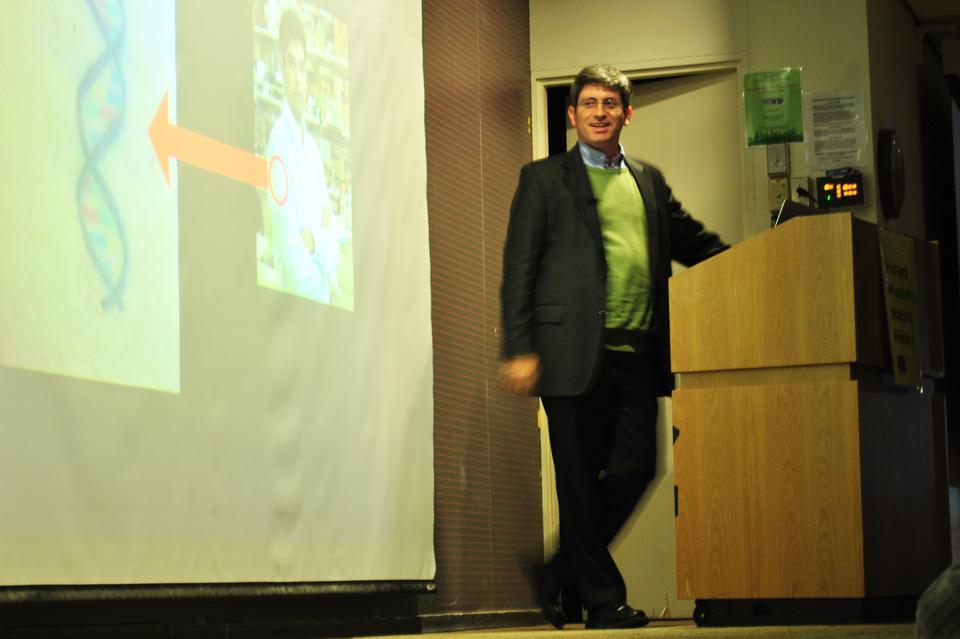 Carl Zimmer, popular science writer and a lecturer at Yale, gave a presentation at the Museum of Natural History Tuesday night on his new book “Science Ink: Tattoos of the Science Obsessed.”

The talk focused on the colorful subculture of science-themed body art and how researchers in every field, from archaeology to biochemistry, use tattoos to capture what they love about their discipline.

“In a weird, unexpected way, tattoos are a good way of illustrating the deep passion that scientists have for their subject,” said Zimmer.

The talk used slides to showcase an eclectic mix of tattoos, ranging from the highly technical to the fantastical.

Zimmer began by showing off a seemingly simple tattoo of a DNA helix belonging to Harvard Medical School neurobiologist Sandeep “Robert” Datta before revealing that its nucleotide structure spelled out Datta’s wife’s initials.

“Some people think of tattoos as a thing that you get when you’re young, drunk, or both,” Zimmer said. “But these scientists have put a lot of knowledge and personal connections into theirs.”

Next on display was a woman covered from shoulder to shoulder in gigantic insects: moths, beetles, and ants, in tribute to her field of entomology.

Chemistry tattoos were also represented, most notably by a woman with the structure of serotonin—the “pleasure” molecule believed to cause happiness—on her lower thigh.

“It’s weird at first when your in-box starts getting filled with pictures of partially disrobed scientists,” said Zimmer, earning laughter from the audience of about 200.

The talk also delved into the history behind modern science tattoos. Zimmer explained how Sir Joseph Banks, an English botanist, learned of tattoos from the people of New Zealand and Tahiti during a voyage in the late 18th century. Zimmer drew parallels between Maori tribesmen with full-face tattoos and scientists who fill their entire back with complex algebraic equations, as well as discussing the powers that tattoos were thought to hold in the past.

“Sailors believed that if they had a tattoo of an anchor on their arm, it would save them from drowning,” said Zimmer.

Even Ötzi the Iceman, the famous 5,400-year-old mummy found preserved in the Austrian Alps, was found to have some crude tattoos on his body.

By way of more modern implications, Zimmer talked about how people use tattoos as a means of expressing their belief in science in the face of oppression. For example, Busra D. Ozpolat, a modern-day Turkish biologist, bears a tattoo of Charles Darwin’s famous finches, whose differentiated beaks helped inspire him to develop his theory of evolution. This holds “a lot of profound meaning,” said Zimmer, as Turkey’s creationist leanings have made it difficult for scientists to teach evolution there. According to the Washington Post, fewer than 25 percent of Turks believe in evolution, the lowest percentage in any developed nation.

Aimee Gillespie, a graduate student at MIT studying geochemistry, said she “never knew how many of my fellow scientists [had] tattoos,” adding that if she were to get a tattoo, it would be of the Keeling Curve—a measure of carbon dioxide in Earth’s atmosphere.

—Staff writer Ethan G. Loewi can be reached at ethanloewi@college.harvard.edu.