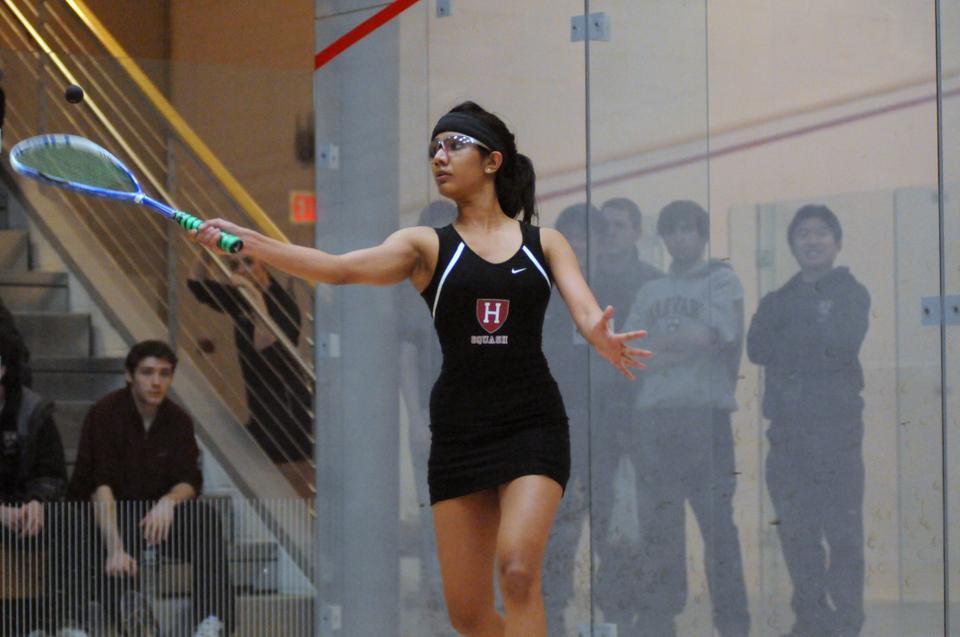 Co-captain Nirasha Guruge, shown above in earlier action, and the Harvard women’s squash team did not drop a single match this weekend. Despite playing a demanding number of games, the Crimson came out on top in each of its matchups, 9-0. Junior Laura Gemmell played her only match of the weekend against No. 15 Amherst, downing her opponent in three straight sets.
By Molly E. Kelly, Crimson Staff Writer

Playing 27 matches in one day seems like a pretty tall order.

“It was a really good weekend,” sophomore Natasha Anzik said. “Everyone came together and had great matches.”

Claiming victory in a 9-0 sweep, the Crimson ended its Saturday play at MIT’s Zesiger Center with apparent ease. Despite the change in Harvard’s lineup, which included rookies Haley Mendez and Julianne Chu in the top two slots, the Eagles failed to find success on the courts—the Crimson captured each match in straight sets in its first-ever matchup against Boston College.

New faces appeared further down the ladder as well, with freshmen Megan Murray and Yuleissy Ramirez playing in the No. 4 and No. 7 spots.

“They’re a talented group,” said sophomore Georgie Brinkley of the team’s newest players. “Squash is an individual sport, so I think it was a new experience for the freshmen to play in college and compete as part of a team. … We’re all excited to see them show their skill in the rest of the season.”

Brinkley herself also displayed her skills this past weekend. At No. 6, the Locust Valley, N.Y. native played her second match of the season in the top nine; her first occurred only hours earlier against the Blue’s Jennifer Hsu at No. 8.

In its middle match of the day, Harvard felled Wellesley in dominant fashion despite a gap of 29 years since its last match against the Blue.

Further changes in the order from top to bottom also did little to slow the Crimson’s momentum.

“The matches all went smoothly for everyone,” Chu said.

Chu herself played in the third slot against freshman Elizabeth Tyson. Winning 11-6, 11-8, 11-6, she continued to make the transition to college play look effortless despite her words to the contrary.

“It’s been a huge transition from junior squash to college squash for me,” she said. “Now we play as a team. [But] I love team-oriented sports, so it has been an especially great challenge.”

In the top spot versus sophomore Emma Haley, veteran and co-captain Nirasha Guruge also played to a 3-0 victory.

Excepting sophomore Julie Monrad’s match at No. 9, each of the other matches were won in straight frames. After losing her third game, Monrad came back and dominated the fourth, giving up only four points en route to defeating sophomore Stephanie Lee, 11-3, 11-5, 9-11, 11-4.

Playing at home against its highest-ranked opponent of the day for the first time since 2003, Harvard did not drop a single game to the Lord Jeff crew. The Crimson is now 10-0 against Amherst.

“We got a lot of matches in against teams we don’t normally have the opportunity to play,” Brinkley said. “Overall, it was a great weekend for us.”

Junior Laura Gemmell made her only appearance of the weekend in the top spot versus rookie Arielle Lehman. The All-American easily dropped her opponent, notching a final score of 11-1, 11-4, 11-3.

But the most impressive performance of the day might just go to Murray. In her first career start, the Bronxville, N.Y. native took the first two frames, 11-1, 11-2, before blanking senior Lord Jeff Megan Clower 11-0 in the final frame.

“They’ve been doing such a good job,” said Anzik of Harvard’s rookies. “They’ve also been very supportive teammates, and it has been really obvious in the past couple of weeks. They’ve been very hardworking and they’ve been fitting in with the team well,” she added.

Anzik, too, did well on the weekend—against Amherst’s Rachel Lupien at No. 8, she won by an impressive margin, winning two of the three games with a score of 11-1.

At No. 3 and No. 4, juniors Natasha Kingshott and Sarah Mumanachit made quick work of their opponents, extending their undefeated seasons. Gemmell, Guruge, Mendez, Chu, and junior Eliza Calihan also have spotless records thus far.

The next challenge for the squad will be maintaining momentum and focus over the long winter break.

Following the New Year, the Crimson will face several top-10 teams, starting with No. 5 Penn.

But the team remains confident.

“You can see the intensity and focus increase in every player at practice as we get closer to the [tougher matches],” Brinkley said.