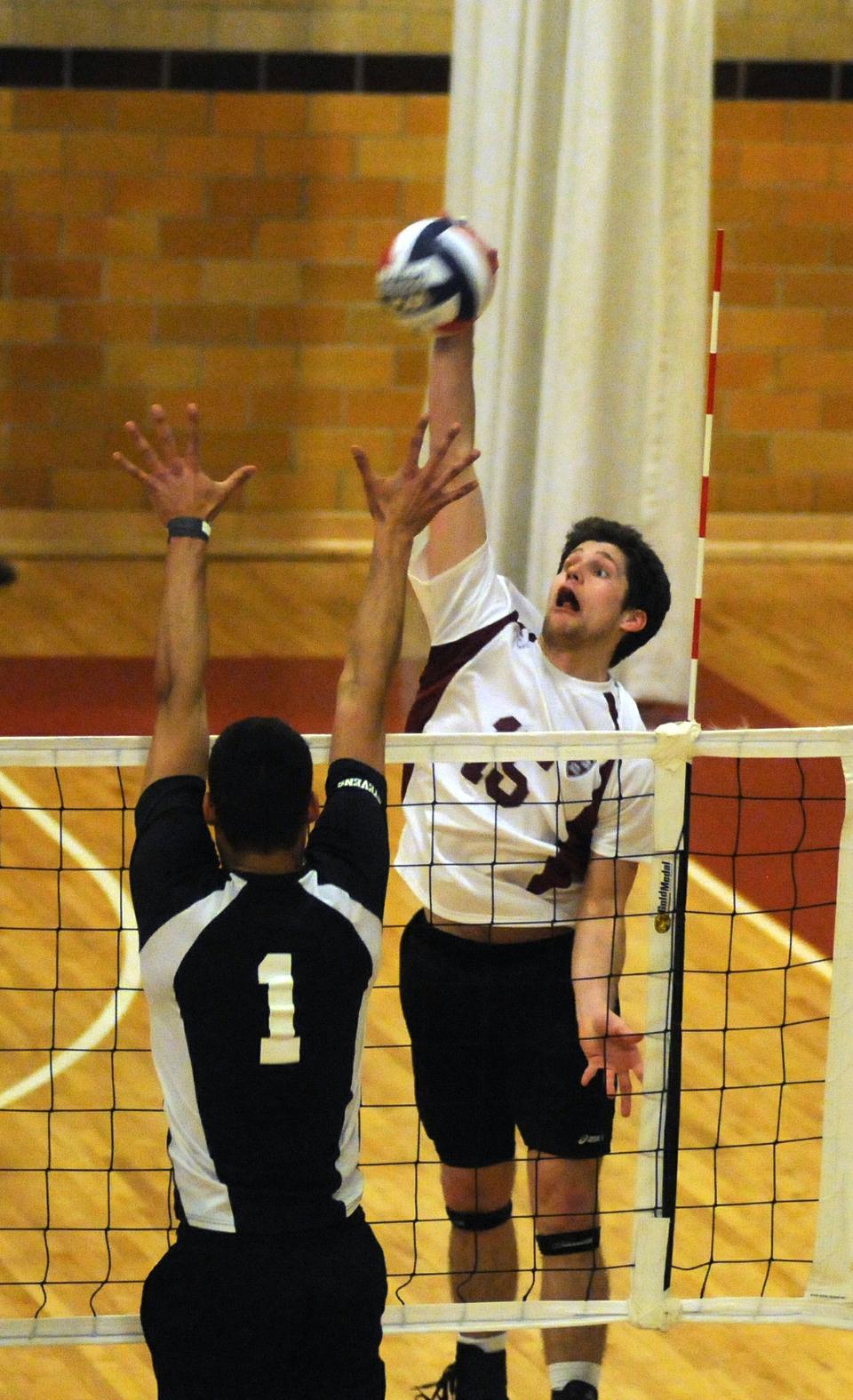 Freshman outside hitter Chris Gibbons, one of four rookie starters for the Crimson, was second on the squad with nine kills in a 3-0 win over Stevens at home Saturday night. Gibbons has picked up 61 kills on the year, helping spark Harvard to a 5-1 record—its best start since 2004.
By James Yu, Crimson Staff Writer

“It was our best match of the year,” Harvard coach Brian Baise said. “We did all the little things in terms of defense. I thought it was our smartest match and most composed match.”

The Ducks carried the momentum late in the third set, coming back from five down to tie the game at 22. On the next point, Stevens capitalized on a hitting error from Harvard to take a 23-22 lead.

With the game on the line, the Crimson went to junior captain Matt Jones, and he delivered by crushing a spike to tie the game at 23. A blocking error from Harvard resulted in game point for the Ducks, but Jones floated a point to save the set at 24-all.

A kill from Stevens senior SteFan PremDas—who tallied a game-high 16 kills—gave the Ducks back the lead at 25-24. But Jones responded with two powerful kills on the outside to regain match point, and he then sealed the contest with an ace.

“It was a good effort all around,” Jones said. “We had some clutch transition swings, and we were able to get some serves in, and fortunately the other guy missed the pass at the end.”

“[Jones has] done that a lot this season,” Baise added. “We made some hitting errors to let them get back in it, but when it got tight at the end, we’re always looking for Matt. He came up today like he has before. You need guys like that on the team, and that can make the difference between a win and a loss...we’re lucky to have him.”

The two teams started the first set trading points. Stevens jumped to a 4-2 lead with two strong kills, but the Crimson tied it up thanks to two consecutive errors from the Ducks.

The lengthiness of Stevens’s front row troubled Harvard early, but as the set progressed, the defense solidified as the Crimson dove for one ball after another to take a 13-12 lead.

“Our backcourt defense was much better than it has been in previous matches,” Jones said. “[Stevens] had some good hitters, and we were able to slow the ball down on their hits.”

With the score tied at 23 all, Harvard rallied to take two straight points, including an ace at game point to take the first set, 25-23.

“We served well,” Baise said, “especially [freshman] Kyle [Rehkemper] at the end of game one.”

The Ducks came out strong in the second set, taking an early 3-1 lead and preserving it late into the frame.

But with the set on the line, the Crimson capitalized on three consecutive Stevens errors to regain a 21-20 lead. Two straight kills from Jones and freshman Chris Gibbons set the score at 23-21, and the Ducks could only muster one more point as the Crimson went on to take the set, 25-22.

The visiting team had another strong start, jumping out to a 5-2 lead in the third game thanks to several Harvard hitting errors. But the Crimson responded with a strong service game that gave Harvard a 19-15 lead. The Ducks rallied late to make it 23-22, but Jones’ clutch performance sealed the match for the Crimson.

“We struggled a bit in that third game, and all the matches we’ve won, we’ve lost the third set,” Baise said. “Tonight was close—we’re up, 20-17, and next thing [we knew] it was 23-all. We need to continue to work on our passing; we were a little better tonight and that really helped our offense.”

“We’ve talked about four freshmen starting, and you don’t know what to expect,” Baise said. “You have high hopes for them, but I’m not totally surprised. I think it’s a great group. It was a long season last year, and the returning guys are determined to change some things. We have some great athleticism, and we’re starting to play as a team.”

—Staff writer James Yu can be reached at fangzhuyu13@college.harvard.edu.