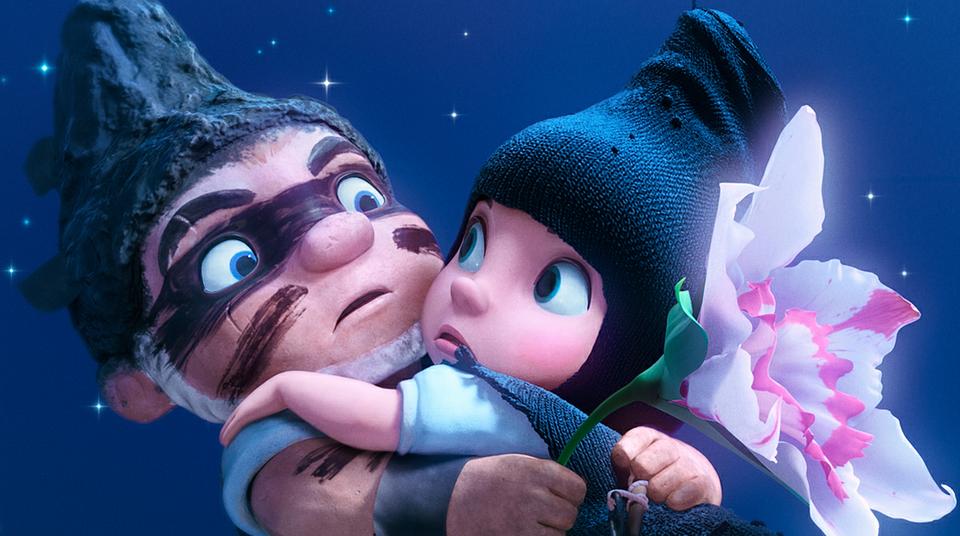 What’s in a name? Would that which we call a film by any other name smell as sweet? In the case of “Gnomeo & Juliet,” the answer is certainly ‘no.’ Despite the punny title and amusing concept, this children’s movie adaptation of the Shakespearean classic is just another formulaic, animated gimmick not destined to impress audiences older than seven.

On Verona Drive in neighboring houses addressed 2B and Not 2B live two feuding garden gnome families—the Montagues and Capulets. During a costume ball, dressed like half-robbers, half-ninjas, Gnomeo and Juliet meet on simultaneous, secret midnight missions to pick an alluring orchid growing atop a nearby barn and fall instantly in love. Caught between their conflicting families—whose warring continually escalates in cartoonish intensity—their fate seems to be as star-crossed as their literary counterparts. Yet, as one would expect from a film made for kids, “Gnomeo & Juliet” veers quickly away from tragedy and instead indulges in comedy.

It is precisely in this arena where “Gnomeo & Juliet” flounders most. The film relies too heavily on awkwardly placed pop-culture references to carry its comedy. From a strange gnomic version of a “Crouching Tiger, Hidden Dragon” fight scene to an oddly-placed imitation of the rose petal scene from “American Beauty,” the absurd number of ostentatious winks to adults—including a handful of forced double-entendres—disrupt the film’s narrative flow and detract from the movie’s ability to deliver any kind of genuine, heartfelt message. These repeated digressions not only distract viewers from the storyline but also beg the question as to who is the true audience of the film and its gags.

This is not to say that the film fails entirely as a comedy. Some of the Shakespeare references—including those mentioned above—are rather witty; they show the film at its satirical best. The garden flamingo character of Featherstone (Jim Cummings) is inspired, and his lines strike the proper balance between random humor and basic storybook character that so often eludes the movie.

Accompanying Cummings is a protracted list of relatively big names, all of whom acquit themselves satisfactorily. James McAvoy and Emily Blunt voice Gnomeo and Juliet themselves, and the movie boasts cameos from the likes of Ozzy Osbourne, Dolly Parton, and Hulk Hogan. Elton John, the executive producer of “Gnomeo & Juliet,” also makes a quick appearance as a glittery purple-suited gnome playing a ballad on the piano.

Elton John takes center stage in the film’s soundtrack, which includes classics like “Saturday Night’s Alright (For Fighting),” “Tiny Dancer,” and a new version of “Crocodile Rock” with Nelly Furtado. Perhaps the choice of songs was meant to embody the feel intended for the movie as a whole: fun, kid-accessible material with some parental appeal. Unfortunately, the film fails to deliver on this promise beyond the music.

“Gnomeo & Juliet” is visually pleasing, but not exceptionally so given the advanced state of today’s computer-generated imagery. Its 3D scenes are decidedly mixed in quality. On the one hand, a rainy scene on the screen rather effectively creates the illusion of rain in the theater. On the other hand, when the camera drops down to street level to create the effect of objects flying at the audience during a lawnmower chase scene, the resulting visual is subpar, reminiscent more of a video game than a film.

“Gnomeo & Juliet” is far too confused to succeed. Despite star vocal casting, a first-rate soundtrack, and—for the most part—attractive 3D visuals, the film never finds its groove. Instead, “Gnomeo & Juliet” goes astray with one too many forced nods to its adult audience, turning what could have been a fun take on an old favorite into just another forgettable animated flick chock-full of double-entendres and out-of-place pop-culture references. Young children will doubtless find the tale amusing, but overall the film has too much harebrained humor and not enough heart to entertain anyone else.

—Staff writer Kelsey C. Nowell can be reached at knowell@college.harvard.edu.