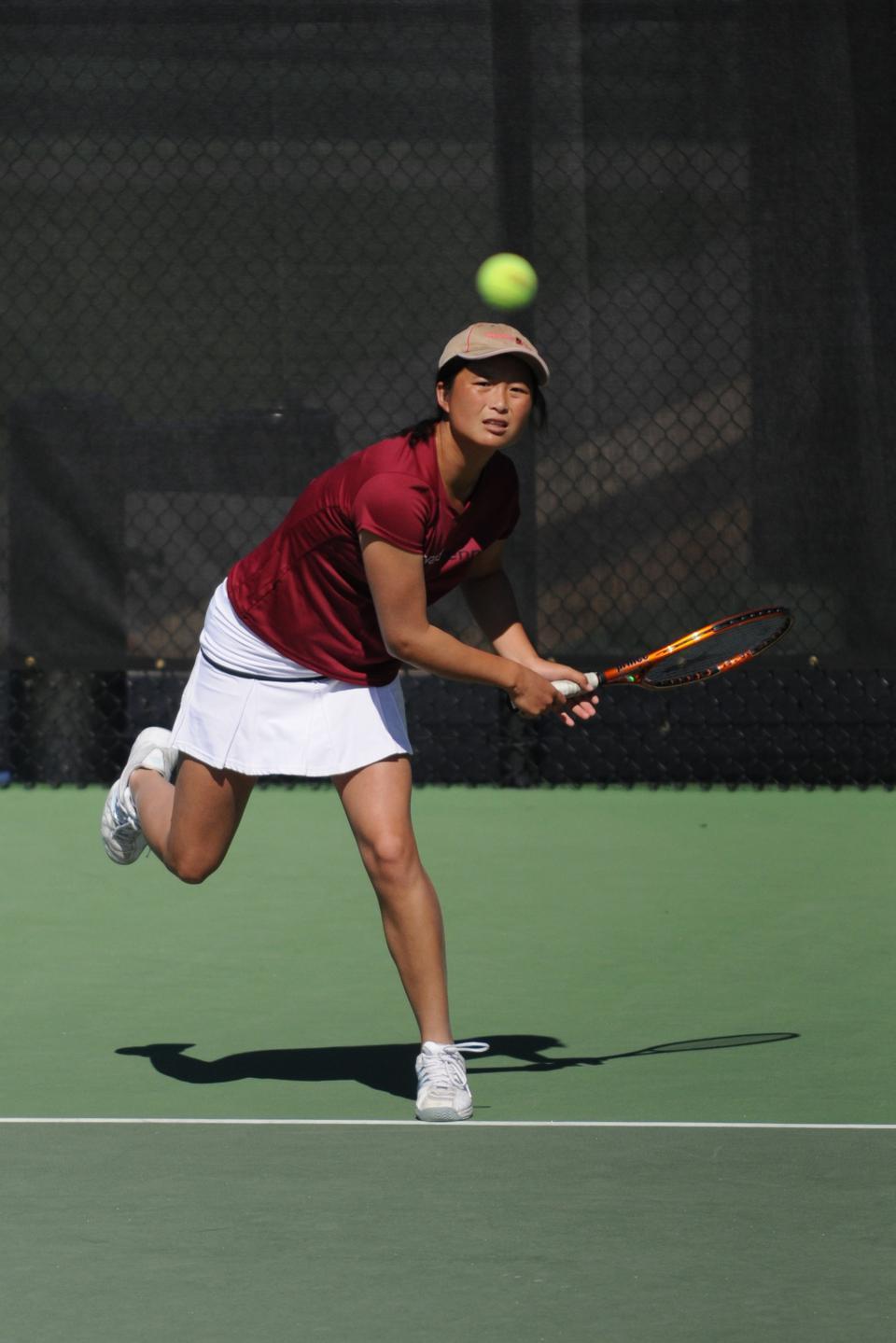 Though Harvard had already clinched the overall outcome, junior co-captain Holly Cao pulled out a three-set match against Boston College Saturday. The veteran, ranked No. 45 in the nation, had fallen at the No. 1 doubles spot to the Eagles’ pair of Alex Kelleher and Olga Khmylev.
By Molly E. Kelly, Crimson Staff Writer

With the outcome of the Crimson women’s tennis team’s match against BC hanging in the balance—Harvard narrowly ahead, 3-2—the day’s two remaining singles matches were forced to three sets.

The Crimson (2-2) had started slowly Saturday at the Murr Center, losing its doubles point for the fourth straight time in the nascent season.

But junior Samantha Gridley managed to garner the momentum she needed to lift her squad to a win.

“Our team performed really well,” Cao said. “We lost the doubles point, and that was a disappointment because we’ve been working on our doubles. [But] we did a really good job coming back after the doubles point. As a team we did really well in the singles matches. We were all really proud that we came away with the win.”

“BC is a very talented team,” Green said. “We weren’t taking them lightly. Every match we were focusing the best we could, and the match went our way.”

Indeed, the Eagles demonstrated their skill right from the start. At No. 1, Kelleher and sophomore Olga Khmylev made quick work of Cao and fellow co-captain Samantha Rosekrans, nabbing an 8-2 victory.

“Sam and I didn’t play our best in doubles,” Cao said. “We had a slow start.”

Sophomore Hideko Tachibana and freshman Natalie Blosser captured a sound 8-1 victory for the Crimson at No. 2, but the crew ultimately lost the doubles point, when sophomore Kristen Norton and freshman Hannah Morrill fell, 8-5, at court three.

But the discouraging start only inspired the Harvard crew to push harder in the singles matches.

“We mustered up all of our energy to pull through,” Green said.

Cao was undoubtedly a prime example of putting it all on the line. Even after her teammate Gridley had clinched the match, the Australia native endured deuce after deuce to eventually come away with a dominant third-set comeback.

“I thought she played pretty well,” Cao said of her singles opponent. “She played a smart match.”

Cao also noted an important factor that would not make it into the game statistics—the fans.

“BC had a lot of supporters, because many of the players are from Massachusetts,” she explained. “[For example,] my opponent had her parents and lots of relatives there to support her.”

“I think the entire team did a really good job of supporting each other, and that was what made the difference for us in the end,” Cao said.

With her squad firmly behind her, Norton bounced back from her doubles loss to senior Katharine Attwell and junior Katarina Gajic. She faced down Attwell at No. 3 and was one of the first off the courts after a dominant 6-0, 6-2 win.

Sophomore Hideko Tachibana secured her second win of the day soon after at No. 2, dropping only four games to rookie Eagle Veronica Corning in her 6-0, 6-4 win.

The only singles loss for the Crimson came at No. 5.

After a tough doubles match, Rosekrans fell to Khmylev for a second time in two quick sets, 6-2, 6-2.

Despite the losses, Green said that she viewed the match as an opportunity for her players to gain individual match experience. She also pointed out the importance of developing a strong mental game.

“The main thing that our team is benefitting from is that we’re getting more and more mentally tough,” Green said. “Mental toughness will be very important...[especially] in Ivy League play.”

As the young season progresses, then, the ladies of the Harvard tennis team will look to apply this toughness to their doubles matches in particular.

“Our number one for us is our doubles,” Cao said. “When Ivy season rolls around, we’ll really need our doubles point.”