"Day of the Oprichnik" by Vladimir Sorokin (Farrar, Straus and Giroux) 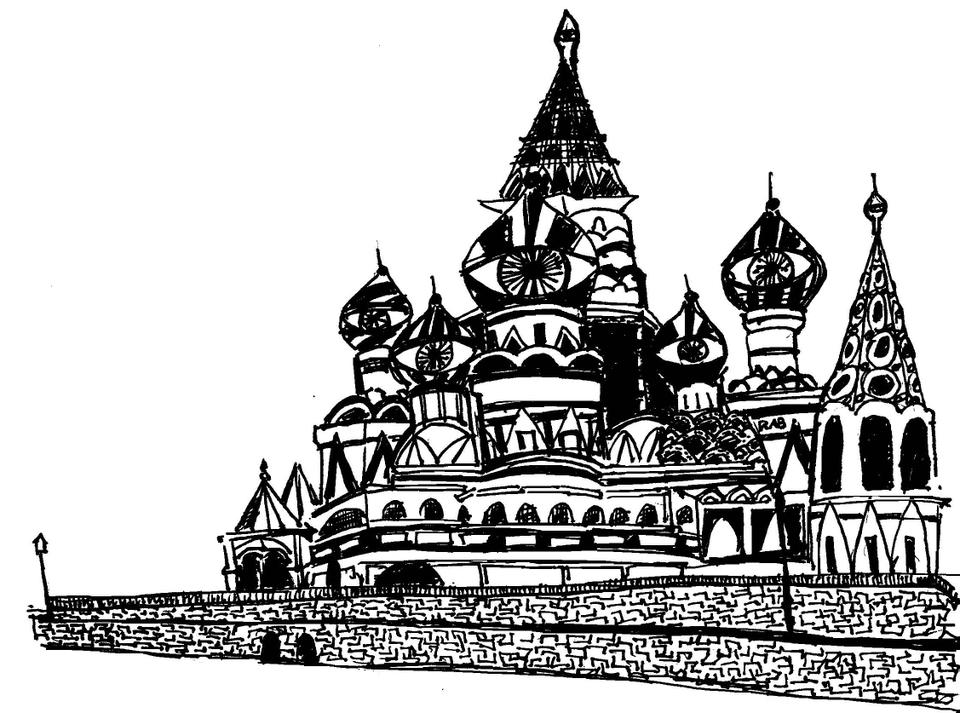 Vladimir Sorokin's "Day of the Oprichnik" will be available March 15.
By Talia B. Lavin, Crimson Staff Writer

“Mama, what goes on here!” exclaimed Sergei Eisenstein, upon first seeing Aleksandr Dovzhenko’s groundbreaking and famously gnomic 1927 film “Zvenigora.” “A horse painted white, a ship with a pointed prow, a monk either buried or disinterred, a horde of mounted Cossack robbers!”  Though Vladimir Sorokin’s “Day of the Oprichnik” has a far more linear narrative than Dovzhenko’s film, the reader is similarly bombarded with a sea of brutal, surreal images: a nobleman hanged on the iron gates of his palace, an orgy in a bathhouse, a murderous police force getting high by eating golden fish, a soothsayer who speaks her predictions by the light of a pile of burning Russian novels.

“Day of the Oprichnik” takes place in a totalitarian state, headquartered in Moscow. The year is 2028. Russia, perpetually a landscape of utopian vision and dystopian nightmare, is plunged again into a state of fear. Welcome to New Russia: Ivan the Terrible has returned, in the form of a new and ghastly monarch. The hero of the novel is Komiaga, a member of the czar’s elite inner circle—the ‘oprichnina,’ named after Ivan the Terrible’s brutal warriors, often called the world’s first secret police. We are privy to Komiaga’s interior monologue as he engages in a typical day’s activities: your average murder of political enemies; a few jiggers of vodka here and there; flights to Siberian provinces; a public flogging; the suppression of a populist bard; a few lines of cocaine; some blackmail; and a number of encounters with the debauched royal family. Sorokin turns the familiar genre of the dystopian novel—as exemplified in “Brave New World” and “1984”—on its head, filtering bewildering impressions of this new world through a hero who is the fearsome instrument of state power. In your typical dystopian novel, the reader becomes acquainted with a new world through a Joe-Average-type protagonist, a cog in the bureaucratic wheel—think Winston Smith or Bernard Marx, the protagonists of “1984” and “Brave New World.” Sorokin’s Komiaga is anything but a cog: he is “a link in the iron chain of the oprichniks,” a figure that revels in—and helps to create—the nightmarish social context of New Russia.

Capitalizing on the wildest dreams of Russian nationalists, Sorokin’s novel, superbly translated by Jamey Gambrell, engages in a kind of hyper-Russophile kitsch. In the novel, Russia has chosen to cut itself off entirely from the Western world, and has built a great wall to keep out its decadent influence. The characters engage in the most Russian of customs, many of which will be unfamiliar to Western readers. They whip each other with birch branches in a steambath; they down glass after glass of kvass, a traditional Russian drink made of fermented rye bread and marinated cabbage juice. The oprichniks don velvet pants, broadcloth caftans, and shirts embroidered with Russian Orthodox crosses. The country quavers before the czar, the Church, and most of all the oprichniks, driving along in red Mercedovs affixed with the traditional symbols of the oprichnina: a severed dog’s head and a steel broom. At once fanatically pious and morally bankrupt, the oprichniki murder and rape without qualm, but refuse to let curse words pass their lips on the czar’s order.

Employing the requisite hyperbole of the dystopian novel, Sorokin demonstrates the most grotesque elements of Russian nationalism in the warped mirror of their imagined fulfillment. He is unflinching in his depiction of the state censorship and casual racism that plagues Russian culture, all fervently embraced by his debauched, fanatic antihero.  The figure of the secret policeman has powerful echoes in the recent history of Russia––notwithstanding its current president, known for his distinguished service in the KGB. Sorokin imagines a future in which Russia, propped up in its economic weakness and increasing dependence on China by a front of oil and gas, is choked under the mailed fist of state oppression and nationalist rhetoric. This vision strikes an uncanny chord in any observer of the country’s current repressive political environs.

“Day of the Oprichnik” is an exhausting read: the reader must consent to his imprisonment in the brutal confines of Komiaga’s conscienceless consciousness. Sorokin relentlessly subjects his audience to a dizzying progression of New Russian experiences. In marathon, day-in-the-life format, Sorokin attempts to establish both the political and cultural status of New Russia. Jamey Gambrell’s translation commendably conveys the full vibrancy of Sorokin’s prose, including his forays into poetry and complex wordplay. The oprichniks’ eyes well up with tears at the sappy poetic hagiographies broadcast on New Russian radio, and they persecute the anonymous author of satiric poems mocking the royal family. The prominence of poetry in the book recalls the Soviet suppression of Russian poets: Mandelstam, Pasternak, Akhmatova, and countless others, condemned to exile or worse for a misplaced syllable or a subversive strophe.

For the Western reader, “Day of the Oprichnik” caters both to Orientalist fascination with Russian traditions and fears of their violent potential. Sorokin’s merciless imagination is often disturbing, and the savage glee of the text mesmerizes. We proceed through Komiaga’s day, held in thrall, as he is, by the divine will of the czar and its violent consequences. One of many fascinating episodes in the novel is Komiaga’s encounter with the obese empress, who awakens at dusk and breakfasts at midnight; hauntingly, she lets loose the fear that the people of Russia abhor their authorities, quietly brewing in impotent rage. “They’re envious because they’re slaves. They know how to pretend. But they don’t really love us, the powerful. And they never will. If they had the chance—they’d cut us to pieces.” Komiaga dismisses this claim, but the statement rings throughout the rest of the book. For all its bizarre situations, Sorokin’s wild romp leaves behind a sobering image: that of a populace bridling, like the reader himself, against a violence that seems endless.