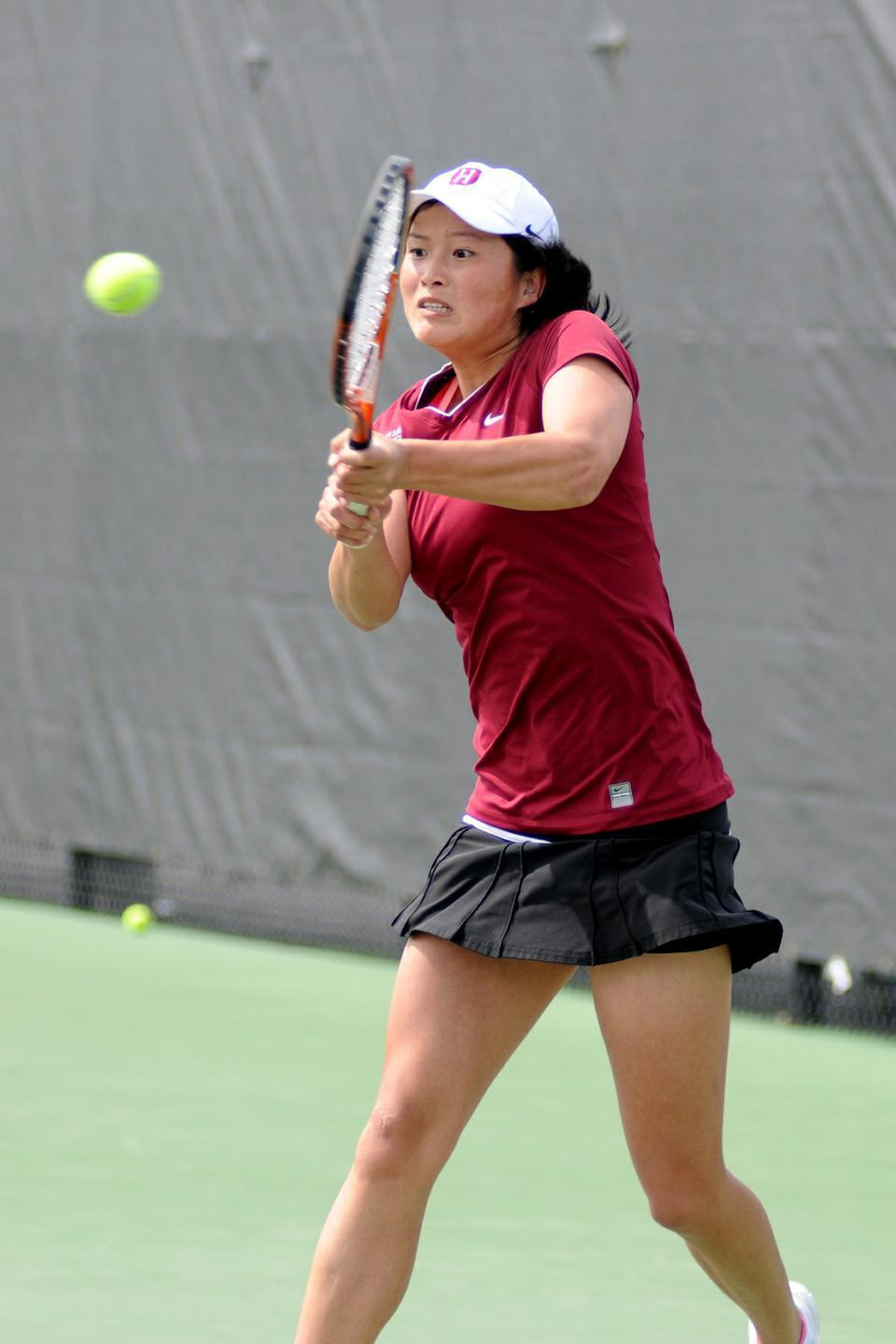 Junior co-captain Holly Cao, ranked 97th nationally, picked up a point for her squad with a straight-set victory at the No. 1 singles spot, but Cao and freshman teammate Hannah Morrill lost at No. 2 doubles, and the Crimson fell to Princeton yesterday, 4-3, to drop to 3-1 in league play. By Karen Zhou
By Ralph Haro, Contributing Writer

Looking to stay undefeated in Ancient Eight play, the Crimson women’s tennis team found its match yesterday at the Beren Tennis Center against Princeton come down to the last set for Harvard junior Samantha Gridley. After she split the first two sets of her match, 6-4, 6-3, both teams lined up to watch the deciding set on the No. 5 court.

“This was the critical set of the day,” junior co-captain Holly Cao said. “We try to support her as much as we can on the sidelines, and by being there, we let her know that the whole team is behind her.”

Gridley struck first, winning the first game, before alternating a loss and win in the next two games to give her a 2-1 lead.

But the Tiger player fought back, winning five straight games to win the match and to secure the overall victory, 4-3.

“Sam Gridley had a really long three-setter to decide the tie, and she fought very hard,” Cao said. “But you can’t win all the time, and we weren’t able to close it out today.”

Having not lost a doubles point in five matches, the Crimson looked in position to once again start the day off with the advantage, holding early leads in each of the three doubles matches.

But the squad quickly lost momentum as the doubles team of Cao and freshman Hannah Morrill lost the first match to finish, 8-4, after being on top, 3-2.

The doubles team of captain Samantha Rosekrans and freshman Natalie Blosser dropped their set soon after, 8-6, after giving up a 4-3 lead. The final pair on court No. 1, sophomores Hideko Tachibana and Kristin Norton, salvaged Harvard’s only win in doubles play, 9-7.

“We’ve been in the situation [losing the doubles point] before this year,” Crimson coach Traci Green said. “We knew our backs were against the wall, but we played well and the matches were very close. They could have gone either way.”

In singles play, Harvard split the six matches, getting three wins from Cao, Norton, and Morrill.

“We had a slow start not getting the doubles point,” Cao said. “But everyone played very hard in the singles matchups.”

Morrill, who played on court No. 6, dominated her opponent, winning with back-to-back 6-0 set wins over Tigers junior Alexandra Epps.

“Morrill, Norton, and Cao are all playing very well right now,” Green said. “We have all the tools to keep moving forward in the Ivy League, and it’s all about putting in good work.”

Cao, who lost on Saturday for the first time all season against Penn, was able to bounce back and cap the third Harvard victory in a close match on the No. 1 court, 6-4, 6-3.

“I was pleased with the way I played yesterday,” Cao said. “[Penn freshman Connie Hsu] was a very strong opponent, so I just stuck to my game today [against Princeton junior Hilary Bartlett.]”

With two matches still undecided, attention turned to the matchup on court No. 4, where Blosser had been defeated 6-4 in the first set after going up early, 2-1. Although she looked to come back in the second set, her opponent—Tigers sophomore Monica Chow—was able to close out the match, winning the second set, 6-1.

With the victory on the line, Gridley was the Crimson’s last hope, but she lost her final two sets to close out the day for the team.

“I thought the match was very close,” Green said. “But Princeton outplayed us, and I think we have to do a better job competing on the big points, especially this weekend in our matchup against Yale.”