‘The Conspirator’ is a Compelling Allegory 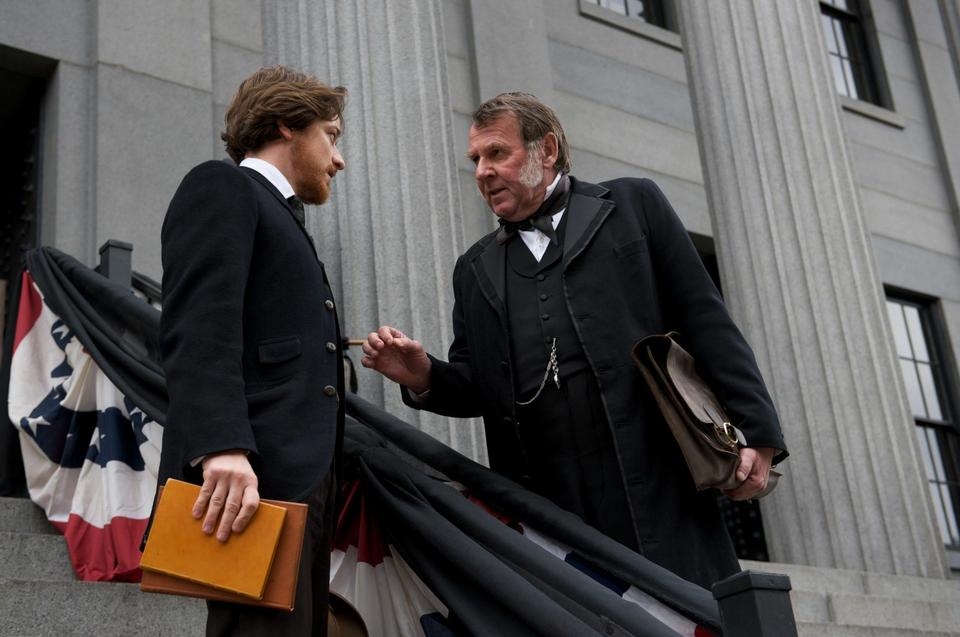 A radical group with grievances against the government carries out a multifaceted attack on numerous targets, devastating the nation and bringing the United States to its knees. Sounds familiar, right? But contrary to what one would assume from that description, these events take place in 1865 and comprise the opening sequence of Robert Redford’s “The Conspirator,” a well-acted period drama that also serves as a potent contemporary allegory.

The film opens on the night of Abraham Lincoln’s assassination, an event which is intercut with simultaneous attempts on the lives of Vice President Andrew Johnson and Secretary of State William Seward. Soon afterwards, the conspirators are hunted down and either captured or killed. Included in this roundup is Mary Surratt (Robin Wright), the owner of the boarding house where John Wilkes Booth and his cronies hatched their plot. Appointed to represent Surratt is Frederick Aiken (James McAvoy), a Union veteran under the tutelage of Senator Reverdy Johnson (Tom Wilkinson). Defending Surratt is not easy, however, as Secretary of War Edwin Stanton (Kevin Kline) has assembled a kangaroo court whose verdict has essentially been decided even before the first witness is sworn in.

In form, the film is consistent with most courtroom dramas, centered upon gripping testimony and interrogation, though Redford occasionally provides “Rashomon”-style flashbacks to liven up the pacing. Particularly compelling in these scenes are performances by Stephen Root as a witness for the prosecution and Colm Meaney as the leader of the military commission appointed to try Surratt.

As for the lead characters, defender McAvoy and defendant Penn both play off each other well and are believable in their roles, though Penn’s Surratt is emotionally static and seems to be the same person at the end of the film as she is at the start. The perennially underrated Wilkinson holds his own as Senator Johnson, a bastion of constitutional rights, though it is Kevin Kline who delivers the most electrifying, scenery-chewing performance as Edwin Stanton—a man with understandable motivations coupled with a deplorable method of realizing them.

The film’s central analogy to post-9/11 America is obvious. “Someone must be held accountable,” Kline’s Stanton tells McAvoy’s Aiken, “The people want that.” The debate over whether or not that national catharsis should come at the cost of abandoning the Constitution is crucial to James Solomon’s script. “It’s not justice you’re after; it’s revenge,” Aiken responds. Drawing its post-9/11 parallels still further, the film even includes a few shots of souvenir vendors clustered outside Surratt’s prison, hoping to profit off Lincoln’s death, much in the same way souvenir vendors now sell shoddy “Never Forget” t-shirts.

While the primary action of the film is its taut courtroom drama, the story is unfortunately weighed down by an unnecessary, melodramatic, and unresolved romantic subplot between Aiken and his wife Sarah (Alexis Bledel), who just simply cannot bear her husband becoming a social pariah, almost as much as we cannot bear her performance. Similarly superfluous is Justin Long’s appearance as a friend of Aiken’s, whose laughably out-of-place acting makes it seems as though Long took a wrong turn on the way to a Civil War reenactment.

Aside from these brief missteps, though, the film drips with historical authenticity; its shots are washed out just enough to look like old photographs, and details in costuming, dialogue, and props all help sell the realism of the work—that and the facial hair. And man, is there a lot of it. Fans of mile-long mutton chops and bushy neckbeards will definitely not be disappointed by this film. Indeed, if there were an Oscar for Best Facial Hair, “The Conspirator” would win hands down.

But the film has more going for it than just sideburns. Driven by strong performances, apt historical details, and weighty contemporary relevance, “The Conspirator” might not be a film that will be remembered by the year’s end, but in the lull between the cinematic graveyard of January and the summer movie season, it’s a definite standout.

—Staff writer Brian A. Feldman can be reached at bfeldman@college.harvard.edu.