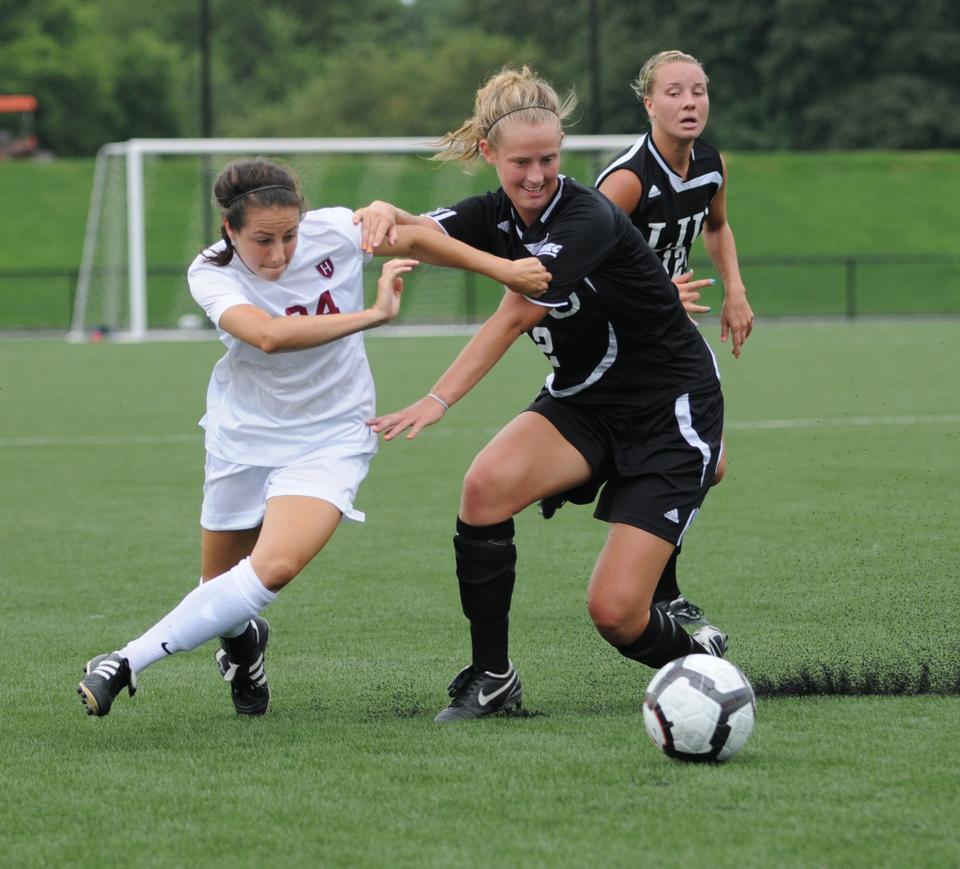 Rookie Elizabeth Weisman, shown above in earlier action, had a standout performance for the Crimson against the Irish women’s national team on Friday. Harvard was first to strike thanks to junior Rebecca Millock’s goal, and junior Sophie Legros hit the game-winner to set the final score, 2-1. By Meredith H. Keffer
By Yoan D. N'Komba, Contributing Writer

In the realm of academics, the university has never been a stranger to facing off against the best and brightest the world has to offer.

But, a mere fortnight after the men’s soccer team faced off against Haiti, the women posted a similar challenge to a cross-continental opponent, showing that Harvard can compete internationally in athletics as well.

“I think it was a good result,” Harvard coach Ray Leone said. “They were very good, but we had about four or five good opportunities, and we managed to finish on two of them.”

Set to play without its six seniors from the fall, the Crimson women’s soccer team came together Friday night to get a head start on next year’s fall campaign. First on the agenda was teamwork.

“We really spend a bunch of time trying to work hard on improving [our] team play,” Leone said. “We lost a lot of great players in this senior class, and this game gave us a chance to see where we have gaps and try to fill them.”

Luckily for Harvard, the junior class was up to the task.

Led by junior co-captain defender Lindsey Kowal, the women got off to a great start on the pitch, lacing the ball through their opponents and maintaining most of the possession.

“Without a doubt, our strongest suit Friday night was our ball movement,” Leone said. “We maintained it for about three-quarters of the match, and it really made a difference. No particular players stood out on the field; it was really a team effort.”

That is, besides the two who scored.

Junior midfielder Rebecca Millock, recipient of an All-Ivy League Honorable Mention in the fall, was the first to get on the scoreboard, powering the ball out of the goalkeeper’s reach and straight into the back of the net.

Millock, who finished her junior season with 12 shots in 17 games, had often struggled to find the net in her Crimson career, never recording a goal for Harvard.

Still, for both her teammates and coach Leone, the result of her strike this time was far from unexpected.

“Rebecca’s had a lot of good shots for us this spring,” Leone said. “But this one, she just crushed. From the moment it left her cleat, that ball looked destined for the goal.”

Then, when the Irish team fought back to bring the game to 1-1, the Crimson had a response to quell the comeback rally.

Junior midfielder Sophie Legros, who had also never put one in the net for Harvard, struck gold with her first shot since her sophomore season, giving her team a one-goal edge over their visitors which would prove the difference.

Legros, who played for Henin-Beaumont of the France Feminine Division I League, was no stranger to the European style of play, and as one of the squad’s only two international players, it just seemed to fit.

“Before the game, I let her know that this was her game to play and her game to win,” Leone said. “We were very happy to see her be the one to score the winning goal.”

Proving its mettle without the senior class that took part in back-to-back Ivy League titles in 2008 and 2009 and NCAA tournament berths in both those years, Harvard has high hopes for the fall season.

“It’s been a little tough filling their shoes, but we’ve been working really hard this spring doing a lot more than we usually do,” junior defender Patricia Yau said. “I think that all that hard work has paid off, and it’s shown in our later games [this spring].”

The team will be returning junior co-captain Melanie Baskind, who was tied for first as the top goalscorer with nine strikes on the season.

Sophomore standout Alexandra Conigliaro, who was good for four goals and four assists this past season, will give the Crimson the attacking punch it’ll need to go deep in the Ancient Eight.

“I’m excited,” Yau said. “We’ve learned a lot more about each other playing this spring, and our chemistry is great. I think we’ll have a very strong core returning next season, and if the recruiting class can come and fill in [our gaps], it will be a great season.”