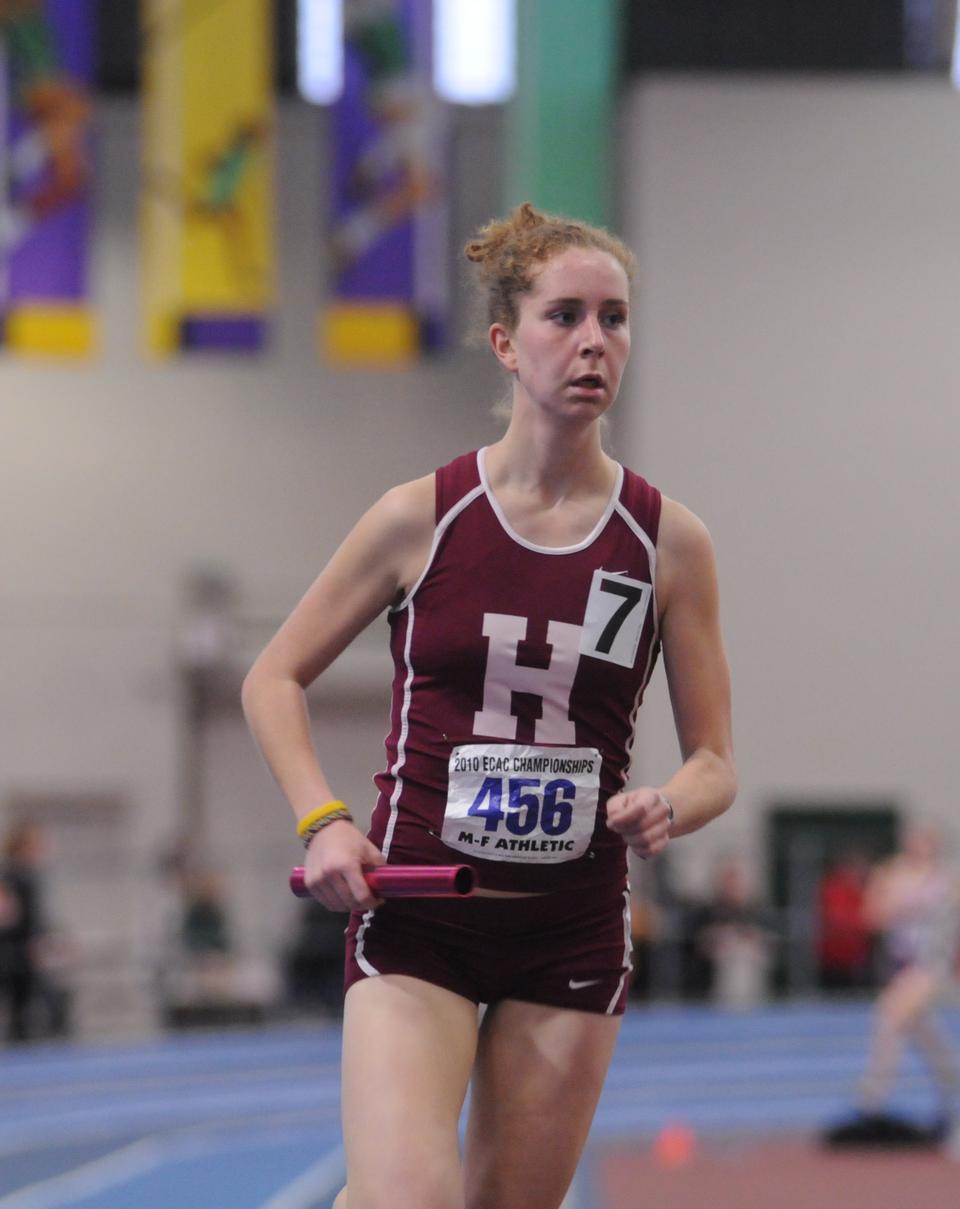 Senior Claire Richardson, shown here in earlier action, placed third in the women’s 5K at the Colonial Relays Friday with a 16.22.15—the second-best time of the veteran’s career and among the top 15 in the nation this year.
By Molly E. Kelly, Crimson Staff Writer

Taking on the Colonial Relays, the Sam Howell Invitational, and the Snowflake Classic this past weekend, the Crimson squad divided and conquered to bring back several IC4A- and ECAC-qualifying scores.

“Twelve people made regional-level qualifying marks,” senior Dan Chenoweth said. “I think that it was a good trip overall.”

A contingent of Harvard vertical jumpers made its way down to Princeton this past Saturday to take on some of the toughest competition in the Ancient Eight.

Clearing the bar at 1.70 meters to match her personal best, sophomore Mary Hirst captured third in the high jump behind Columbia’s Monique Roberts and Tara Richmond. Her mark, good enough for an ECAC ticket, also marks the fourth best in team history.

Although the outdoor season is still quite young, these marks will be crucial for later tournament bids.

“One of the great things about setting good marks early in the season is that [it has] a role later in the season when it comes to seeding,” Chenoweth explained.

Another group from the Crimson track and field squad stayed local for the weekend, making the short trip up to Tufts in Medford, Mass., on Saturday to compete in the throwing events.

On the women’s side, sophomore Shannon Watt won the discus with an ECAC mark of 43.11 meters and the shot put with 12.09 meter toss.

The Harvard men saw a 1-2 finish in the discus throw, as sophomore Edward Brucker claimed the winning mark of 48.68 meters, good for an IC4A qualifier, and rookie Dustin Brode settled below his teammate on the leaderboard with a distance of 44.35 meters.

The pair switched up the order of finish in the shot put, but both of their marks were good enough for IC4A qualifications.

The Crimson similarly dominated competition in the hammer throw. Senior Eric Clayman punched his IC4A ticket with a throw of 55.96 meters, and co-captain Ablorde Ashigbi snagged the No. 2 finish with a mark of 51.32 meters.

“I think that we did particularly well this past weekend,” Harvard coach Jason Saretsky said. “We had a number of standout performances, and the team overall got a great experience with the competition.”

For the third meet, Chenoweth and the other Crimson runners hit the road Thursday through Saturday for the Colonial Relays at William & Mary in Williamsburg, Va., where they gained valuable experience for tougher matchups down the road. “I was pretty pleased with how our distance runners performed this past weekend,” Saretsky said. “I know that it’s still early in the season, but I think that their best performances are still ahead of them.”

But a better performance may be hard for some. In what Saretsky called “stand-out” performances, senior Claire Richardson nailed down a third-place finish in the 5K, and Chenoweth won on the men’s side. Co-captain Brian Hill also nabbed a No. 2 finish in the 800 meters.

Yet to Chenoweth, more important than winning was the team’s experience.

“Getting good outdoor racing experience helps us all acclimate to the conditions for the rest of the season,” the Illinois native explained.

The qualifying marks also continued to roll in for Harvard.

The 4x800 team of sophomore Jeffrey Homer, juniors Darcy Wilson and Brian Paison, and Hill finished just behind Virginia Tech with an IC4A-worthy time of 7:38.19.

On the women’s side, senior Hilary May, freshman Natalia Paine, junior Meghan Looney, and rookie Alaina Murphy captured fourth place in the relay thanks to May’s powerful opening leg. The mark was good enough for yet another ECAC qualification.