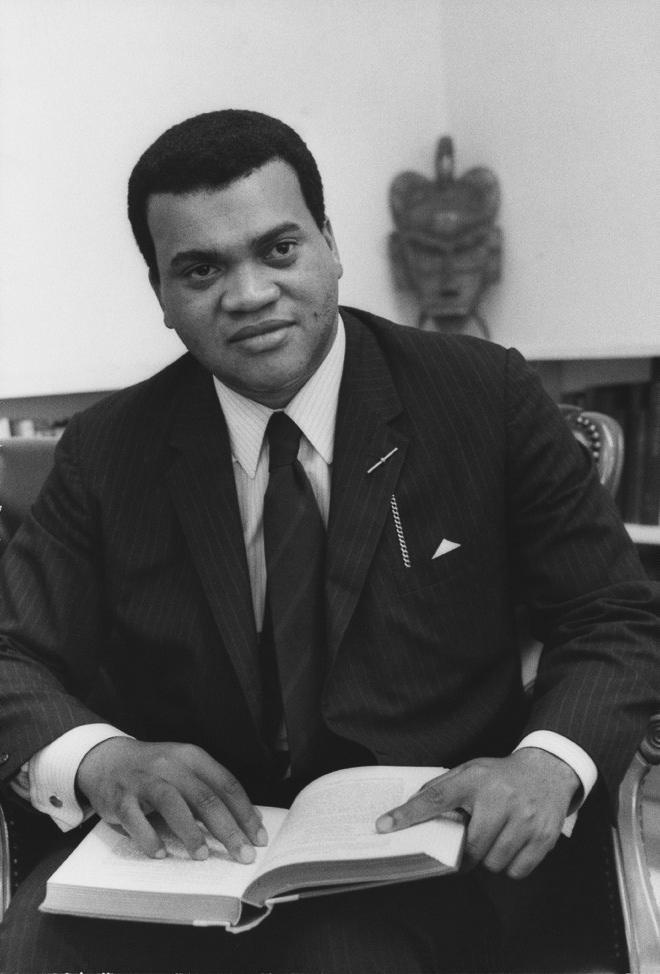 Archie Epps dean of students from 1971-1999, and one of Harvard's first black administrators, came to start working for the university in 1961. During his tenure Epps was not afraid of stirring things up and brought such controversial black figures as Malcolm X, Ralph Ellison, and James Baldwin.
By Justin C. Worland, Crimson Staff Writer

Heading to work on April 9, 1969, Archie C. Epps III and his colleagues anticipated the impending student takeover of University Hall. The raid, which garnered national attention, would be recorded in Harvard history as the symbolic zenith of Harvard student resistance during the late ’60s and early ’70s, a time fraught with undergraduate protest of the Vietnam War and Harvard’s administration more generally.

Yet while most administrators were quick to leave the building as students flooded in, Epps, an associate dean at the time, fortified himself in his office and departed only when the protestors carried him out.

Epps’ commitment to standing his ground solidified his position as a voice of authority within the administration while highlighting the complexity of his character.

A young African American from Louisiana who brought Malcolm X to speak at Harvard but also helped organize the March on Washington, Epps was not the typical voice of authority at a university that was still largely a bastion of white New Englanders.

In his 28 years as the College’s dean of students, Epps—a 1961 graduate of Harvard Divinity School—broke down barriers and sought to unite a College that was rapidly diversifying.

Matriculating at the Divinity School in the late 1950s, Epps realized that his new home would be drastically different from the place of his southern upbringing.

When he arrived in Cambridge, he and a few friends did a rough survey of Harvard’s graduate schools and found fewer than a dozen African Americans, according to Valerie Epps, who was married to Epps from 1969 until his death in 2003.

She said that despite being part of a small minority, Epps’ friendly personality allowed him to get along with nearly everyone. It was this affability that led Dean of the College John U. Monro ’35 to appoint Epps as a “baby dean,” one of Harvard’s associate deans, after his graduation from the Divinity School.

According to Epps’ son Josiah Epps, some questioned the appointment, believing that his father was hired solely because of his minority status. But over the course of his career, Epps would prove his ability not just as an administrator but as someone capable of uniting different factions throughout the College.

“When we got more minority students, that created some challenges for Archie,” says former University President Derek C. Bok. “I think that presented him with something of a challenge and I think he was viewed with some suspicion by minority students for some time.”

But his philosophy remained steadfast, and in his capacity as the dean responsible for minority issues, Epps refused to support a cultural center solely for African-American students as other colleges had done, fearing it would isolate the community from the rest of the College.

Computer Science Professor Harry R. Lewis ’68, who served as dean of the College while Epps was dean of students, says that Epps’ approach to improving diversity focused on bringing communities together rather than isolating them.

“He was resolutely an old-fashioned integrationist,” Lewis says. “He was very proud of Harvard, very proud of his associations with Harvard. He wanted what Harvard had to offer to be open to people like him and others.”

Epps was also given the responsibility for dealing with student groups when Harvard and Radcliffe merged completely in 1977.

“He decided everything had to be open to everyone,” says Lewis, explaining that Epps decided that final clubs would no longer be a part of the University after refusing to accept women.

“He would sometimes take a long time to come down on something like that, but when he decided ... he was always clear and firm. He was a very principled person,” Lewis says.

FROM SOUTH TO NORTH

Epps was born in Lake Charles, La., where Jim Crow laws segregating whites and blacks were predominant. Despite the inherent disadvantages of being black in the Deep South, Epps’ family provided him with opportunities. His parents were local business owners and school teachers.

Still, Josiah Epps says that his father did not talk much about his early life.

“He was very happy with the life he made here and had very mixed feelings about growing up in Lake Charles, La., as a black man,” says Josiah Epps, noting that as a child his father’s home was near the beach, but racial segregation required the family to travel more than 300 miles to swim in the water.

After moving north, Epps was accepted into the Harvard community and became an icon, recognizable to people across Boston.

“The minute I meet anybody in the Boston area, they say, ‘Epps, are you related to Archie Epps?’” says Valerie Epps. “He just was like a semi-celebrity.”

Josiah Epps says that this celebrity status resonated with people of all kinds.

“I can talk to professors and deans who tell me how great he was and then talk to security guards and maintenance workers who have the same thing to say about him,” he says.

When the Harvard Foundation began its project to introduce diversity into Harvard’s collection of painted portraits, Epps was one of the first to be honored with a portrait that now hangs in University Hall.

“I’m extremely proud that it’s there and in that building. It’s really about the longevity of Harvard,” Josiah Epps says. “Harvard’s been around 400 years and in another 400 years that portrait will still be around.”