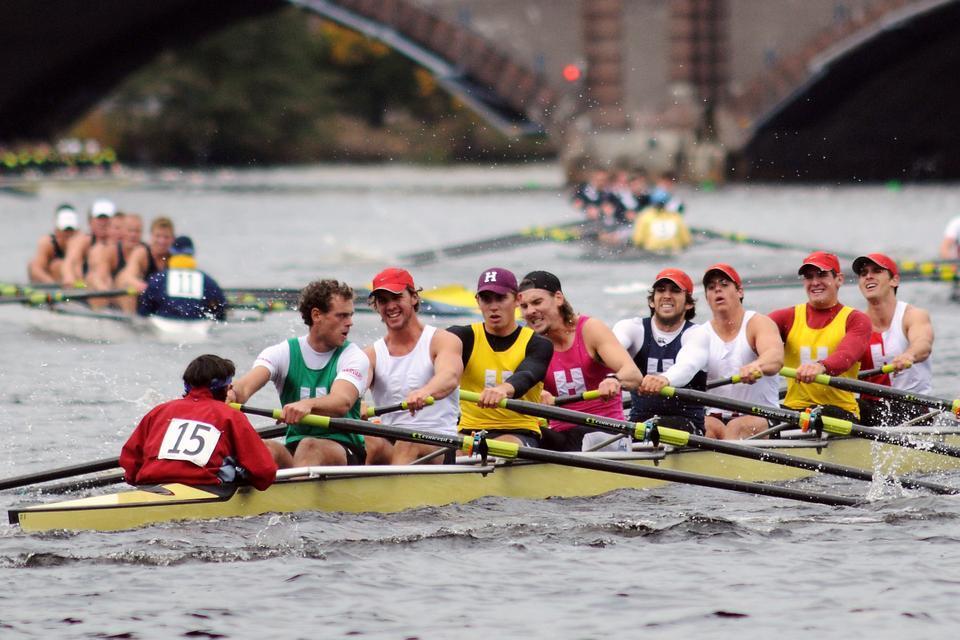 Harvard lightweight crew enjoyed unparalleled success this season and is presently undefeated so far, but its season is not over. Over the summer, the squad will compete in a race against Yale in addition to competition at the IRAs, where the team finished disappointingly last year.
By Christina C. Mcclintock, Crimson Staff Writer

And then there was everyone else.

In the EARC this year, there simply wasn’t another school that compared.

Both the No. 1 Crimson lightweight crew and No. 3 heavyweights dominated their regional competition from start to finish en route to a trip to Worcester, Mass., for Eastern Sprints.

“I thought it was a terrific performance,” said Harvard heavyweight coach Harry Parker. “It’s not often a program has all of its crews row right up to their potential.”

For the lightweights, the key moment in the season came when the 1V used a dominant third 500 meters to move past Princeton and Yale and earn the title of the nation’s fastest crew.

The heavyweights’ tightest race might have been even more impressive. With 300 meters to go, the Crimson 1V was down two to three seats to a Tigers crew that wouldn’t go away.

But Harvard’s sprint gave it a 1.2 second lead that preserved what was then a team-wide undefeated streak.

That in-race resilience was the product of unprecedented depth on both squads. Athletes in both the 1V and the 2V had to fight for their seats all season, and the 1V and 2V shared the limelight all season.

“There are some really talented rowers in the 2V who most other years would be in the 1V,” said senior Jared Dourdeville, two seat of the lightweight first varsity eight. “And that really showed on Sunday [in the Grand Finals at Sprints] when the 2V started at a 48 and basically just dominated the race from the first 500.”

The heavyweights also have several 2V athletes strong enough for almost any other 1V in the country, which explains why lineups changed just before the heavyweights’ race against Northeastern.

“I think it stems from having three or four good [freshman] classes in succession, which is unusual,” Parker said. “One of the contributing factors is the fellows have stayed with the program whether they’ve been in the first crew or the second or the third.”

Combine the Crimson’s depth with its impressive erg scores and seemingly flawless technique and Harvard had a recipe for success.

The Sprints showing came on the heels of a regular season in which every Crimson eight went undefeated and the lightweight 1V and 2V both earned the right to call themselves the nation’s best.

The season is far from over as a trip to Red Top for the Harvard-Yale Regatta awaits the heavyweights, and IRAs is still on the horizon for both squads.