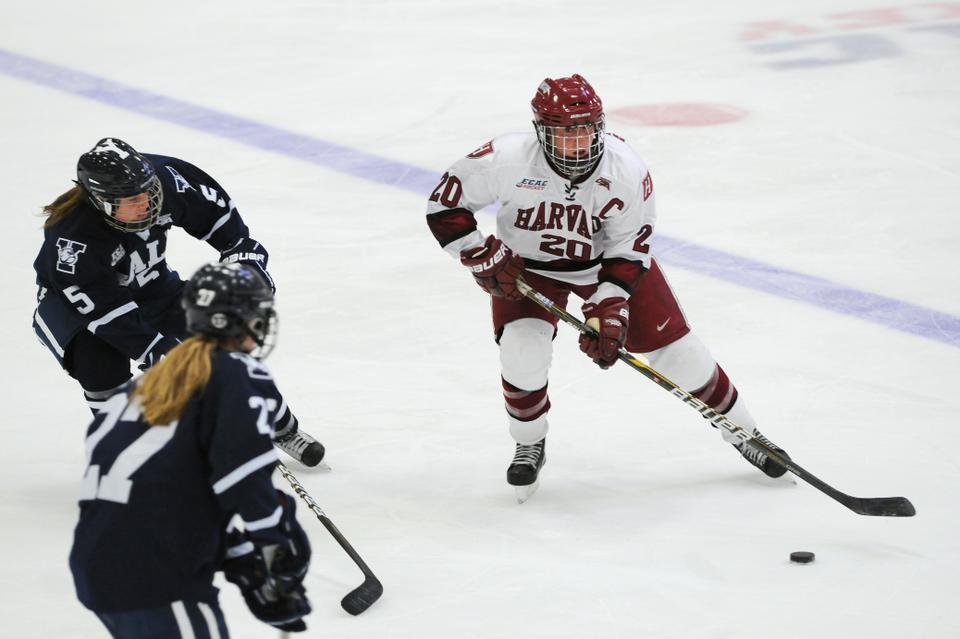 Tri-captain forward Kate Buesser led her team with 15 goals on the year, including five power play scores and three game-winners. The Harvard women’s hockey team made up for its slow start with a six-game winning streak in January, with the last of those wins coming against rival Yale.
By Catherine E. Coppinger, Crimson Staff Writer

Though the Harvard women’s hockey team (17-11-4, 14-5-3 ECAC) got off to a slow, 5-6-3 start this season, the team came back rejuvenated after winter break just in time to turn things around. A six-game winning streak sparked the momentum needed to make a bid for the ECAC title.

“We started out [the season] a little timid but came together after Christmas break and put together a great run,” tri-captain forward Kate Buesser said. “Overall, there was huge improvement over the season, which was pretty impressive. I don’t think many people thought we would do as well as we did, and it was nice to exceed expectations.”

To prepare for games later in the year, Harvard started off its season playing a tough schedule, including ranked opponents such as Yale, Cornell, and Minnesota.

“We started off playing highly ranked opponents which is great,” senior forward Katharine Chute said. “Those are the types of games that help us develop in the long run.”

A major turning point in the season came in the team’s second contest against Quinnipiac, as Harvard earned a late victory with three third-period goals.

“We were down, 2-0, going into the third,” Buesser said. “We just regrouped in locker room and put on this [Jackson 5] song, ‘I Want You Back,’ which helped ease everyone out of whatever funk they were in. It got everyone to hold their sticks a little less tightly.”

“We were able to score three goals and win the game,” she continued. “We carried that momentum with us for the rest of the season.”

The three goals—two from freshman forward Kalley Armstrong and one from sophomore defender Josephine Pucci—came within eight minutes of each other, as a burst of Harvard domination proved too much for the Bobcats.

Harvard posted another strong showing in the Beanpot, staging a thrilling comeback in the first-round matchup that pitted Harvard against Northeastern. Down 3-0 with about five minutes elapsed in the second period, the Crimson pushed its way back to a 3-3 stalemate that held even after double overtime. Harvard claimed victory in the shootout, but BC ended the Crimson’s hopes of winning the Beanpot, taking down Harvard in the finals, 3-1.

“The games we played that were tied and we took to overtime, I think, define us as a team,” tri-captain Liza Ryabkina said. “We were behind and never stopped going, and we ended up winning most [of those games].”

In the ECAC tournament, the Crimson swept its quarterfinal matchup against St. Lawrence.

But a strong Dartmouth team eliminated Harvard in the semifinals of the ECAC tournament, 4-1, ending the Crimson’s 2010-2011 campaign.

A young lineup anchored the defense for the Crimson this year, as tri-captain defenseman Leanna Coskren is the only non-forward in her class.

“During the season, we had only one senior defensemen,” Pucci said. “The rest of us were either freshmen or sophomores, so there was a lot of opportunity for people to step up.”

The Crimson still depended on each of its six seniors for leadership, especially during the early stages of the season.

“I definitely think we got better as the season progressed,” Pucci said. “We had six seniors that were all strong presences on and off the ice. We all wish we could have gone a little further at the end, but we had a lot of games where we never gave up and came back.”

Despite a disappointing finish, team traditions remained strong as the Crimson reflected positively upon the year.

“One thing that has been really important on this team is leadership and preserving the traditions of the program,” Chute said. “The upperclassmen have put in a strong effort to try to communicate our traditions and pass them down to the freshmen.”

“Every year, the team has its own personality,” she continued. “I’m really thankful to everyone for making my senior year the best it could be, but not emphasizing that they were playing for the seniors. It’s really about all of us working toward a common goal.”