Working for Cambridge-based firm, professors consulted for the Libyan leader 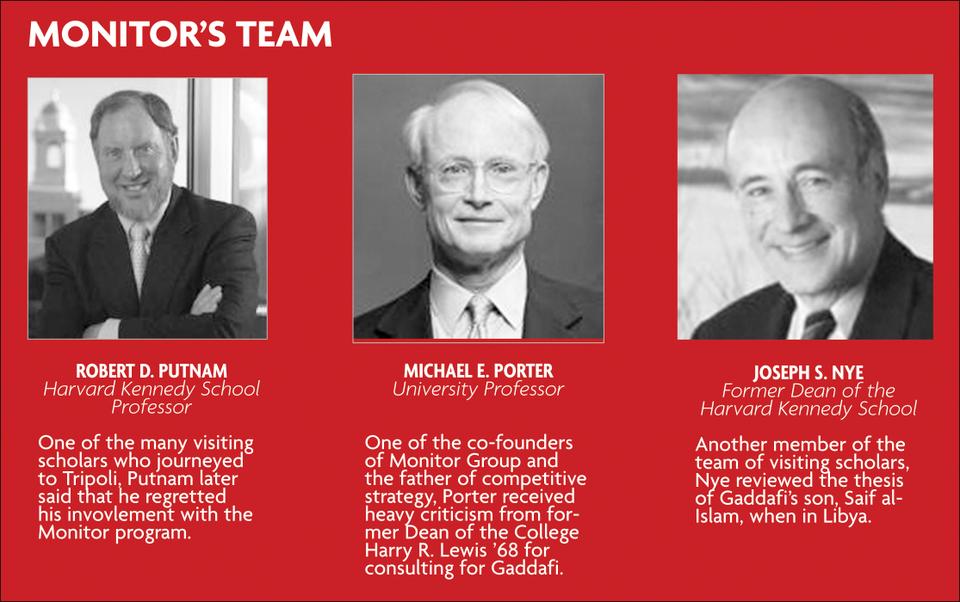 Back in 2006, Libyan dictator Muammar Gaddafi had a PR problem. Having acquired a decades-old reputation as a sponsor of terrorism and an oppressor of his own people, Gaddafi wanted the West to see him in a more positive light.

So he turned to a Cambridge-based consulting firm called Monitor Group, a company co-founded by Harvard Business School professors and closely affiliated with prominent faculty members. They were an effective bunch.

They flew Western intellectuals out to Libya who then returned home to wax poetic in the American media about Libya’s political reforms.

They compiled a report, which affirmed that Libya was the world’s “only functioning example of direct democracy on a national level.”

But today, as a civil war rages in Libya, those experts who coordinated the project and who participated face an image problem of their own.

As the world has turned its attention to the upheaval in the troubled North African nation, the academic community is scrutinizing the activity of several professors who worked with Gaddafi’s regime—and, in one case, helped with his son’s dissertation—as consultants or guests of Monitor Group.

In the wake of the revelations, some Harvard faculty members are encouraging the University to publicly find fault with at least one of its most prominent professors.

Former Dean of the College Harry R. Lewis ’68 is foremost among those calling for Harvard to respond to the work of University Professor Michael E. Porter, a Monitor co-founder and a co-author of the report that called Gaddafi’s Libya a “popular” democracy, an analysis from a top academic that recent history shows was greatly flawed.

CONSULTING FOR A DICTATOR

But Harvard professors have focused on the political conclusions of the report, which, among a set of recommendations, indicated that Libya was a functioning democracy and heralded the country’s system of local political gatherings as “a meaningful forum for Libyan citizens to participate directly in law-making.”

The report was a product of Monitor’s work consulting for Gaddafi from 2006 to 2008. The Libyan government—headed by Gaddafi, who has ruled since a 1969 military coup—hired consultants from Monitor Group to provide policy recommendations, economic advice, and several other services.

The consulting group carries a distinct Harvard flavor. On its website, the company touts the Harvard ties of several of its founders and current leaders.

Of the 16 “thought leaders” who head the company, six mention positions at Harvard—mostly at the Business School—in their biographies on the company website.

Lewis has focused the discussion on Porter, who has come under the most intent critical gaze among the professors involved due to his high positions in both the company and the University. At Harvard, he holds the University’s most prestigious faculty position as a University Professor, a cadre that includes Paul E. Farmer, Henry Louis Gates Jr., and Lawrence H. Summers.

In response to recent criticism, Monitor has pointed out that when the firm was working in Libya, the political climate was markedly different from the current atmosphere of violent internal conflict.

Beginning in 2003, Gaddafi began pursuing better relations with the West, announcing that Libya would no longer seek nuclear weapons and that it would pay compensation to the families of victims of the 1988 plane bombings over Lockerbie, Scotland, which the Libyan government was accused of orchestrating.

In 2006, when Monitor began working with Gaddafi, “the policy of the United States and the U.K. and other countries was beginning to embrace bringing Libya back into the community of nations—you had a country that was in the dark for a long time that looked like it was coming into the light,” said Larry Kamer, a spokesperson specializing in crisis management recently brought on by Monitor.

“What has transpired since has made it very clear that Gaddafi was just not ready for reform,” he added.

Porter said in a written statement to The Crimson, responding to Lewis’ criticism, that he ended his work with the regime when the situation began to change.

“As it became clear over the following year that vested interests and conservatives had succeeded in halting the reform process, I stopped my work in Libya in the first quarter of 2007 and have not worked there since,” he wrote. Porter declined to comment for this article.

The offices of Libya’s Mission to the United Nations declared independence from Gaddafi’s regime in February as the civil war escalated. “All this optimism, it was all based on empty promises,” Second Secretary of the Mission Dia A. A. Alhutmany said in an interview with The Crimson.

Alhutmany said that Gaddafi’s “real face” has now become apparent. As heated conflict rages between Gaddafi’s forces and the rebel ranks, the Western world is now largely united in its criticism of the regime.

‘AFOUL’ OF THE LAW

The episode crossed from dubious judgement to a question of legality when the U.S. Department of Justice, prompted by media scrutiny of Monitor’s activities in Libya, expressed concern that the firm may have been acting as an unregistered foreign agent—in effect, lobbying for Gaddafi.

Monitor then launched an internal investigation, which found that the firm had in fact “run afoul of certain laws,” according to Kamer.

The company said that its program of flying scholars to Libya constituted lobbying under the Foreign Agents Registration Act. In early May, Monitor retroactively registered the program in Libya, as well as recent work for the Kingdom of Jordan.

The program brought one visitor to Libya each month to improve the image of Libya in the Western world. According to a 2006 memo, Monitor was paid $250,000 per month for one year, plus an expense budget of up to $2.5 million.

These visitors, the memo promised, would be prominent American thinkers who would be selected based on two criteria.

The first: the relevance of their ideas to the Libyan authorities whom they would meet.

The second: “the strength of their influence in guiding US foreign policy.”

Putnam has since said that he was unaware of the program’s intention to influence public opinion and that he would not have participated had he known.

The memo, co-authored by Monitor’s director and its CEO, former Harvard Business School Professor Mark B. Fuller, was leaked in 2009,

It said that “Libya has suffered from a deficit of positive public relations and adequate contact with a wide range of opinion-leaders and contemporary thinkers.”

It continued, “This program aims to redress the balance in Libya’s favor.”

The memo further stated that Monitor would encourage the publication of articles favorable to Libya in some of America’s most reputable newspapers and magazines, and that the company would work with Libya’s lobbyists to identify influential Americans—writers, professors, politicians, and others—who “need to be approached ... to enhance their understanding and appreciation of Libya.”

Kamer also said the consultants wrote a book proposal for a never-realized work in which Gaddafi would voice his political views. In addition, they did research for Gaddafi’s son to use in his doctoral thesis at the London School of Economics.

“It’s a real aberration from the work they do,” the spokesperson said. “They don’t help with dissertations.... Ghostwriting books is far from the Monitor Group’s core mission.”

While Monitor has said its visiting scholars program was in violation of U.S. law, Lewis has focused on the consultants’ report. He first vocalized the debate at Harvard on the floor of the April Faculty of Arts and Sciences meeting.

“A tyrant wanted a crimson-tinged report that he was running a democracy, and for a price, a Harvard expert obliged in spite of abundant evidence to the contrary,” he said in April.

“Harvard rightly expresses its pride when a member of our community does something noble,” he said. “Shouldn’t Harvard acknowledge its embarrassment, and might you remind us that when we parlay our status as Harvard professors for personal profit, we can hurt both the University and all of its members?”

Faust has declined to call Porter’s behavior inappropriate, saying that the president’s responsibilities do not include serving as “scolder-in-chief.”

“I was disappointed by her response,” Lewis said in a recent interview with The Crimson.

Faust maintained in a later interview that Monitor is a separate entity from Harvard.

“That’s an independent organization and business, commenting on its own past behavior, and I would weigh in somehow?” she questioned in an interview with The Crimson. “I don’t think it’s the president’s role ... in the great marketplace of ideas, I’m responsible for keeping it open, keeping it lively, encouraging participation.”

While Faust declined to comment on Monitor’s actions, others have been more critical.

“Monitor has publicly stated that it erred, and far be it from me to disagree,” University Provost Steven E. Hyman said. “They participated in what turned out to be a public relations effort.”

“It’s lending the Harvard name, in a sense, to Gaddafi,” he said.

Chibli Mallat, a visiting professor at the Law School, said he has had dealings with the Gaddafi regime under very different circumstances.

He is currently representing the family of a Lebanese imam who disappeared in 1978 and may have been killed or imprisoned by Gaddafi, He said he has been offered money by the Libyan regime to drop the case.

“I’ve been very blunt about rejecting it,” Mallat said. “In a way, I feel a little bit of more than satisfaction that I did what I think, that I refused to be—.”

Mallat cut off his sentence. He continued, “I don’t have a judgment of colleagues, but I know that I had a choice like this and I didn’t take it.”

—Tara W. Merrigan and Zoe A. Y. Weinberg contributed to the reporting of this article.