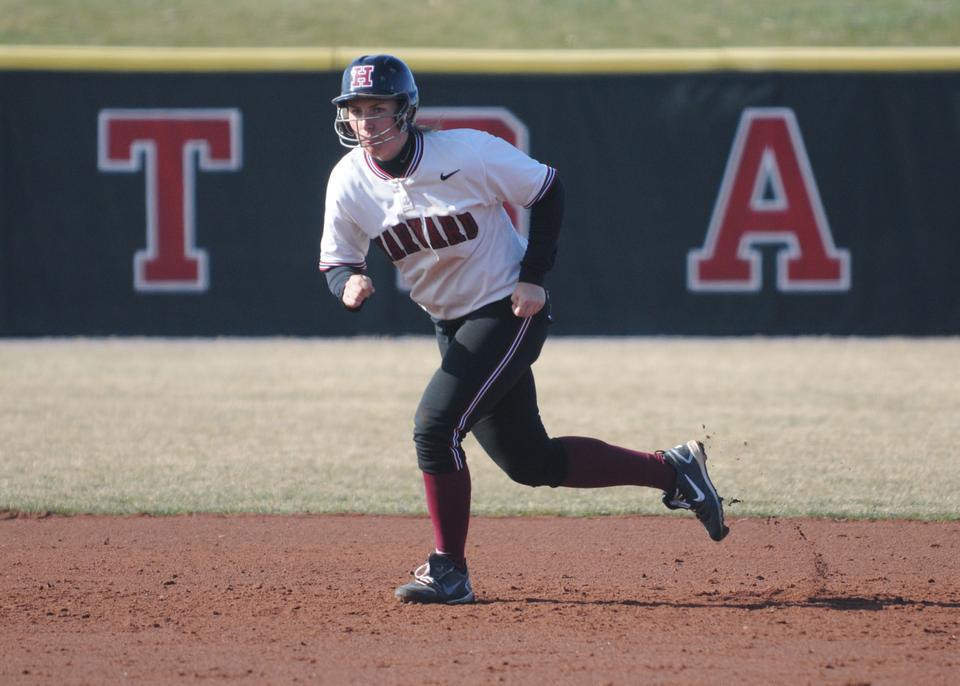 Junior Whitney Shaw, pictured above in earlier action, and the Harvard softball team will get a shot at redemption at home in this weekend’s Ivy League Championship Series against Cornell.
By Darren McLeod, Crimson Staff Writer

Harvard is back for a rematch that couldn’t have been written better. But this time around, it’s the Crimson’s series to lose.

The Big Red was able to slip by the Crimson last season in the 2010 Championship in a one-run win in the third game of the best-of-three series.

“This entire year our main goal was to give our seniors a chance to win another Ivy League championship,” said freshman third baseman Kasey Lange. “For it to be against Cornell, winning it for them would be that much sweeter.”

After crushing Dartmouth last weekend in a four-game series in which Harvard put 37 runs on the board, the Crimson clinched home field advantage and the North Division title.

The Big Red had to win in its series this week against Princeton to remain atop the South Division in order to face Harvard this weekend for the title.

Both teams have had recent success in the Ivy League. Cornell won the championship last year, while the Crimson has won its division four of the last five years.

Harvard has also won the Ancient Eight title five times, most recently in 2007, but it has been unable to get over the hump in the championship series since.

The Crimson is looking to cap off a historic season in which it has garnered an Ivy League-record 18 wins with a title to seal the deal.

“The team has really come together at the right time,” Lange said. “We have been playing really well all season, but as of late our team is definitely playing the best it has all season.”

Harvard is looking to ride the curtails of its defensive and offensive leaders who have shut down opponents and put huge numbers on the scoreboard throughout the season.

Defensively, the Crimson has two dominant pitchers in junior righty Rachel Brown, who is ranked 13th nationally with 274 strikeouts and was last week’s Ivy League Pitcher of the Week, and freshman right-hander Laura Ricciardone, who has consistently kept opponents at bay.

“Our pitching from Rachel and Laura has been outstanding,” Lange said. “Having a pitcher like Rachel who literally shuts down teams allows us to take advantage of opportunities to win ball games.”

Brown has not only been pitching well recently—posting a 0.57 ERA last week in three games—but has also earned 20 wins this year, a new Harvard record.

“We have been playing with a lot of confidence and it has definitely circulated throughout the team,” Brown said. “All the hard work is finally paying off, and the team is peaking at just the right time.”

With strong pitching performances from Ricciardone, who has 12 wins of her own, the Crimson has been able to record a program-best 34 wins this season.

“I have never been on a team before that I have had so much confidence in scoring runs and backing me up,” Brown said. “It takes so much pressure off of me as a pitcher knowing that even if we fall behind early we have the bats to come back.”

Led by the consistent play of both co-captain second baseman Ellen Macadam and Lange, Harvard is putting the pressure on its opponents just to keep up with its high scoring offense.

The Crimson has both the second- and third-best batters in the Ivy League, with Macadam and Lange batting .449 and .436, respectively.

Both of them are breaking records left and right, with Macadam recording 51 runs scored and 74 hits, while Lange’s 20 doubles lead the league and best the previous school record.

Lange is also heating up at the most important time of the year, winning the Ivy League Player of the Week award after having an astounding .688 batting average in the final stretch of the season.

“This weekend, we just have to keep playing like we have been throughout this entire year,” Lange said. “With consistent offense and good pitching we can compete with anyone. Cornell is a challenge we have prepared for all season.”

With Harvard’s pitchers and batters playing at their best going into the Ivy League Championship, Cornell has a challenge ahead as it faces a softball team looking to earn redemption.