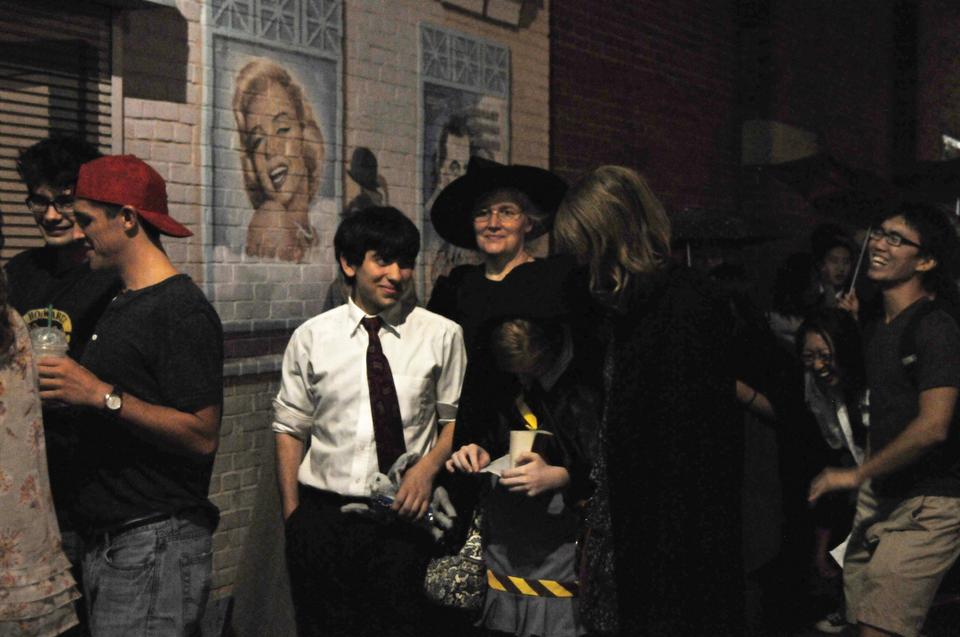 Two friends wait on line for the new Harry Potter movie while another reads. Behind them, a woman dressed as a witch waits to see the film.
By Naveen N. Srivatsa, Crimson Staff Writer

At the AMC Loews Harvard Square theater like theaters across the nation, throngs of Harry Potter fans gathered to bear witness to the cinematic end of a phenomenon that has captured the interest and the imagination of a generation for 13 years.

The midnight release of “Harry Potter and the Deathly Hallows: Part 2” on Friday drew a line that had snaked past the end of the block, into the alley connecting JFK Street and Church Street, by 11 p.m., an hour before the movie was scheduled to start.

The mood of the crowd was bittersweet, a mix of anticipation for a movie that has earned rave reviews among critics and a sense of sadness that the saga will be coming to a close. Underlying it all was the feeling that this was no normal movie.

“Harry Potter is like our Beatles,” said Julie A. Pridham, holding a wand that she said her sister whittled out of wood. “It’s the big thing we grew up on.”

But what was she going to do once the movie is over?

“We’ve been reading the books since we were, what, 11?” said Elise A. Merchant, a friend of Pridham who will be attending Tufts Medical School in the fall. Atop her head sat the mask of a Death Eater, the term given to a follower of the series’ chief antagonist Voldemort.

Like past midnight releases of Harry Potter books and movies, Friday morning saw some moviegoers dressed like the characters from the novels. In the alley by the Coop, two children dressed at wizards pretended to duel. Robes and wands were borne by many, as were various other forms of insignia: hats worn by witches, the red and gold tie associated with Gryffindor, and round glasses that resembled those worn by Harry Potter himself.

A sentiment shared among this generation of students was the closeness with which their lives tracked that of the characters. “We followed him in age,” said Gerard J. Cedrone, a rising 1L at Harvard Law School.

“When I was little, I was like, ‘Where’s my owl? I want to go to Hogwarts,’” said Flora Wang, a rising freshman at Brandeis University.

Ellen Kim, a rising freshman at the University of Pennsylvania who was waiting in line with Wang, said the first installment of the series, which debuted in the United States in 1998, was “the first really big book that I read.” She called Harry Potter “a good friend to have.”

Maya Sharodi, a rising senior at the University of North Carolina at Chapel Hill, said she started reading the series when she was 10.

“This is the end of an era for so many Harry Potter fans,” she said.