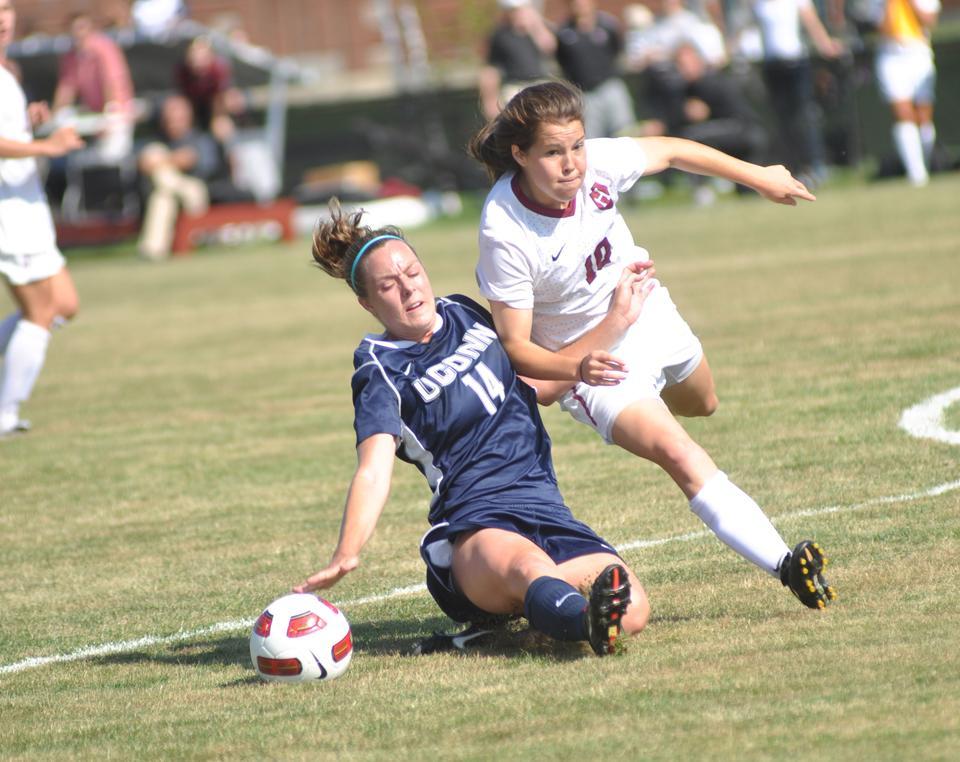 In one of the toughest games of the women’s soccer team’s preseason schedule, the Crimson (3-1) depended on rookie Lauren Urke and junior Alexandra Conigliaro to secure the host’s 2-1 victory over the University of Connecticut.

In a close fight until the end, Sunday’s matchup at Ohiri Field saw two firsts: a goalie sent to the hospital, and the Huskies sent back to Connecticut with a 3-3 record.

“We knew coming out that this would be a good team and that we had to bring our best,” Urke said. “An all-team effort: every single person on the field would have to play their best, and I think everyone put 100% effort out there.”

Coming into the 30th matchup between UConn and Harvard, the Huskies felt poised to continue its historical success—with 24 overall wins—against the Crimson.

But Harvard was ready this year, and with a tough freshman class and an even tougher back line, the squad left the field with its undefeated record at home intact.

“I thought we were committed to what we were trying to do which was try to keep the ball, possess the ball, and stay behind the ball because we knew that our legs were going to be tested to the max because of the game on Friday night [against University of Massachusetts],” Harvard coach Ray Leone said. “We held it together and held off a great team. UConn is a big time team, so it was a big win for us.”

The freshman Urke started the game on the right foot for Harvard, nailing in a goal in the first two minutes of the match, the first of her Crimson career.

Co-captain Melanie Baskind set up Urke with a smooth cross that the freshman whacked past UConn goalie Jessica Dulski.

Dulski, who in the Huskies previous four games allowed only four goals, made three saves on Sunday while giving up two goals to the Crimson.

Harvard’s lead didn’t last long as midway through the first half, the Huskies’ Riley Houle sent a long shot past the hands of Harvard goaltender Jessie Wright to tie the score at one.

Wright, who sustained a hit to the head in the early minutes of the first half, was soon pulled from the game and sent to the hospital to check for a concussion.

“We might be doing some special magic, some magic potions for them,” Leone said of his three injured goalkeepers. “They’re a team of four. We’re a big team, but we’re also a team of four and [our goalies] got to do it together. Whoever has to play will play well.“

With junior goalkeeper AJ Millet out with a broken nose from Friday’s game, and freshman goalie Bethany Kanten still suffering from an injured shoulder, freshman Cheta Emba stepped into the net, making four crucial saves against the Huskies.

“I was just trying to stay calm and bring home a win for the team, do what I could when I was called on,” the rookie said.

Emba had a near-injury moment, scaring Leone and the rest of the squad, when with 51 seconds left in the game, chaos in front of the net forced the goalie to land face-first into the ground. Although trainers were called, Emba decided to stay in for the remaining seconds.

“My favorite moment was probably seeing Cheta play out that last ball there,” Urke said. “She took it for the team, and that’s something we’ve talked about, making that sacrifice.”

Despite the goalie changes, the back end of the Crimson stayed tough, best seen when senior Lindsey Kowal quickly blocked a shot in the beginning of the second half, preventing a Huskie shot on a momentarily empty goal.

“The back four was really strong today,” Leone said. “They had so many things to deal with and all four of them played fantastic.”

Coming out of halftime with a 1-1 tie, the Crimson defensive line felt the pressure of a newly energized UConn squad.

But despite dominating possession, the Huskies couldn’t convert. Instead, ten minutes into the second half, Urke again helped Harvard take the lead.

The freshman sent a cross pass to Conigliaro—a Crimson sports comper—who headed it in for her first goal of the season.

With Conigliaro’s goal, and sophomore Peyton Johnson’s big kick in the last 10 seconds of the match, the Crimson grabbed its third victory in a row.

“This win, we said it’s a stepping stone,” Emba said. “We need to keep doing big things, keep going further to bring home the Ivy at the end.”