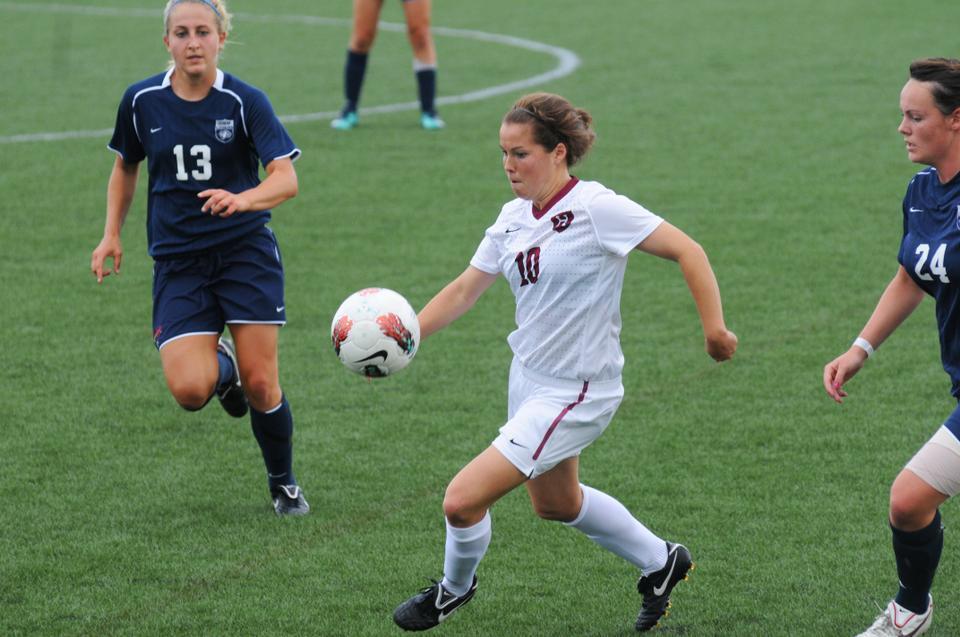 In Friday night’s Ivy season opener for both Harvard (4-4, 1-0 Ivy) and the University of Pennsylvania (5-2, 0-1), the Crimson took advantage of wet conditions and the Quakers’ sluggish start to grab a 2-0 victory against last year’s Ancient Eight champs.

“We’ve been in their spot before, and it’s hard,” Harvard coach Ray Leone said in reference to the season following the Crimson’s championship victory in ’09. “Our team, everybody [in the league], is going to bring their unbelievable best against the Ivy champs—no doubt about it. We just tried to focus on us, and we made a step forward today.”

Co-captain Melanie Baskind scored both of Harvard’s tallies in the first 20 minutes of the match against Penn goalie Sarah Banks, who had allowed only two goals in the entire preseason. Both times Crimson sophomore Peyton Johnson was credited with the assist.

“I think we did all of the little things right tonight,” Baskind said. “It’s about respecting your opponent and coming to play. You know they’re going to bring their best. It’s a new season, everyone’s on the same page.”

Johnson created Harvard’s first opportunity with a cross in front of the Quaker goal, where a waiting Baskind took the pass and knocked it into the back right corner of the net.

Then in the 25th minute, off of a Johnson corner kick—one of six the Crimson took on the night—Baskind again converted an opportunity into points.

“What a way to start out, and they were clinical finishes,” Leone said. “[She was] very, very good, but it was a team effort—she’ll be first to tell you.”

While the offense played what Leone said was the sharpest soccer his squad has shown this season, it was the defensive end that stepped up against the Quakers.

“Defensively, that is the performance of the season by far,” Baskind stated. “Penn is an excellent team, so for us to win tonight, that was a big deal. This was such a team win; we’re just looking forward to the next one.”

Despite the wet conditions and a constant downpour, the Crimson’s defense provided the needed stability, including sophomore Rebecca Millock and freshman goalie Bethany Kanten, who completed one of the biggest saves of the night.

Millock headed and diverted a Penn shot out of the box, which was immediately sent back in by the Quakers.

Moving out of the net, Kanten’s quick push against the ball cleared out a potentially dangerous situation for Harvard.

“We’re a good, fast, technical team, so it helps that we have a good touch on the ball to start with, and make sure we’re conscious of the fact that it’s wet and it’s going to skip,” Baskind said. “[With the rain you] have to be aggressive and be ready for surprises.”

Penn attempted a comeback in the second half, making sharper passes and taking six shots on goal.

But the Quakers missed the power of defending Ivy Rookie of the Year Kerry Scalora, who suffered an injury last weekend against George Mason. Without Scalora—who has scored five goals this season—the Crimson back line stayed tight letting its offense respond with 11 shots of its own in the last 45 minutes.

For Harvard’s captains and coach, what showed the most progress was how eight Crimson players took shots against the defending Ivy champs, tallying up 16 total for Harvard.

“It’s a testament to the depth of our team. We have a lot of different players who can play in multiple positions,” Baskind said. “It’s awesome this year. Every single person who has started has started for a reason because they bring something to the table.”

“The people coming off the bench have been fantastic,” Baskind added. “At this point, we’ve got 20-plus players who have real game experience, which is awesome going into league play.”

The Crimson backline’s strips and saves helped out freshmen goalkeepers Cheta Emba and Kanten in their first Ivy appearances. Emba played the first half saving one shot on goal, while Kanten appeared the second half making three saves.

“You don’t know what’s going to happen, but the [freshmen in goal] were calm, cool, collected, and communicative so I was really pleased with their performance,” Leone said.

Harvard hopes to continue the momentum as it prepares for its match-up against Yale next weekend.