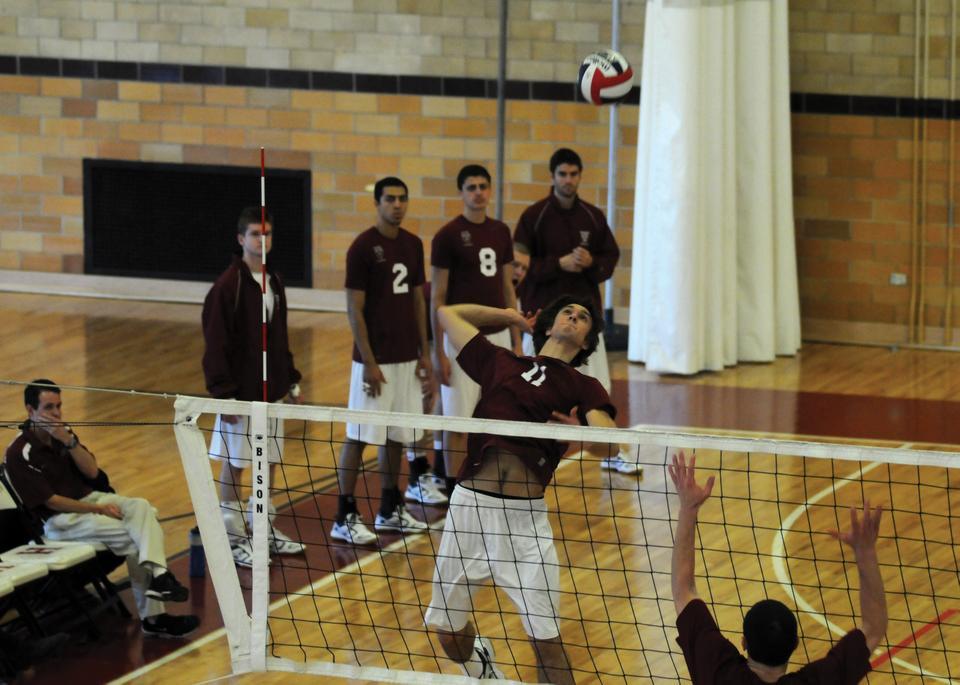 Co-captain and outside hitter Matt Jones led the Harvard men’s volleyball team last year, tallying 332 kills for an average of almost four kills per game and earning a total of 399 points. Jones and the Crimson begin the 2011-2012 campaign on tonight at Endicott College.
By Darren McLeod, Crimson Staff Writer

After a rebuilding year peppered with strong performances by its freshman class, the Harvard men’s volleyball team (9-13, 1-7 EIVA Hay) is looking to continue building upon the core foundation that it created with last year’s team.

"Last season, as a freshmen unit, we were able to get a lot of playing time and develop as collegiate competitors," said sophomore outside hitter Michael Owen. "Though we did make a few rookie mistakes, it better prepared us for this season and gave us an opportunity to learn how to play together."

The experience of seeing time as freshmen may pay dividends this year, but Coach Brian Baise took no chances when he decided to change the way the team prepares for this season.

"This season we came back to campus to train a week earlier than normal, so we were able to train together for a full three weeks before we even have our first match against Endicott," said sophomore opposite hitter Nick Madden. "The extra week really allowed us to bond further as a team and better prepare ourselves for the upcoming season."

Coach Baise not only changed the amount of time the Crimson spent together training but also the way in which they trained.

"Coach modified our lift, and we lifted hard in the preseason," Madden said. "We were in even better shape coming into this season. We are looking to be much more physical this year after all the workouts and time spent in the gym."

With a tougher schedule this year due to a change in the structure of league play, Harvard will have the chance to prove itself early and often as a contender in the EIVA. In the new format, each team will play all seven of its conference opponents both home and away instead of just matching up twice against teams in its specific four-team subdivision.

This year’s freshman class also looks to contribute on the court right away. Freshmen opposite hitter John Manzo, outside hitter DJ White, and middle hitter Caleb Zimmick are all additions that will likely see a lot of time this season.

"If you look at our roster, we are still a young team," sophomore libero Chris Gibbons said. "But the great thing about our team is that everyone has the potential to contribute right now, which is great because it provides depth."

The team as a whole returns all but one starter from last season. And with all that experience on the floor, team chemistry is only expected to grow.

Co-captains outside hitter Matt Jones and libero Dan Schreff will continue to provide a steady hand to a young team.

"This year we are looking to just come out strong both in our regular schedule and in conference play," said Jones. "We struggled a bit last season but we had moments where we played really well. We’re looking to maintain some consistency this season. I think with all the time we’ve played together, we will have better passing and chemistry."

Harvard will also be returning to California this season for the second time in nearly a decade to face Cal State Northridge, Pepperdine, and Cal Baptist.

"The trips to California are great, because many of us are actually from California," Owen said. "Being able to compete against a few of the talented teams that we have heard about our whole lives challenges us to perform well, day in and day out."

The Crimson is looking to start off just as hot as last spring, when it won six of their first seven matches.

"Last year we were able to come together quickly to get quite a few wins," Jones said. "But this year, we know going in that it’s all about getting those all-important conference wins."

"It is really important that we be fully prepared going into the year because of the way our schedule runs with the changes to league play and the early conference games," Madden said. "With all the work we put in this year and last, preparing ourselves as a team, we’re just ready to go out and compete."

The combination of experience, preparation, and the return of its leadership this season has given the Crimson new confidence going into its first match against Endicott in Beverly, Mass. this week and the tough season ahead.