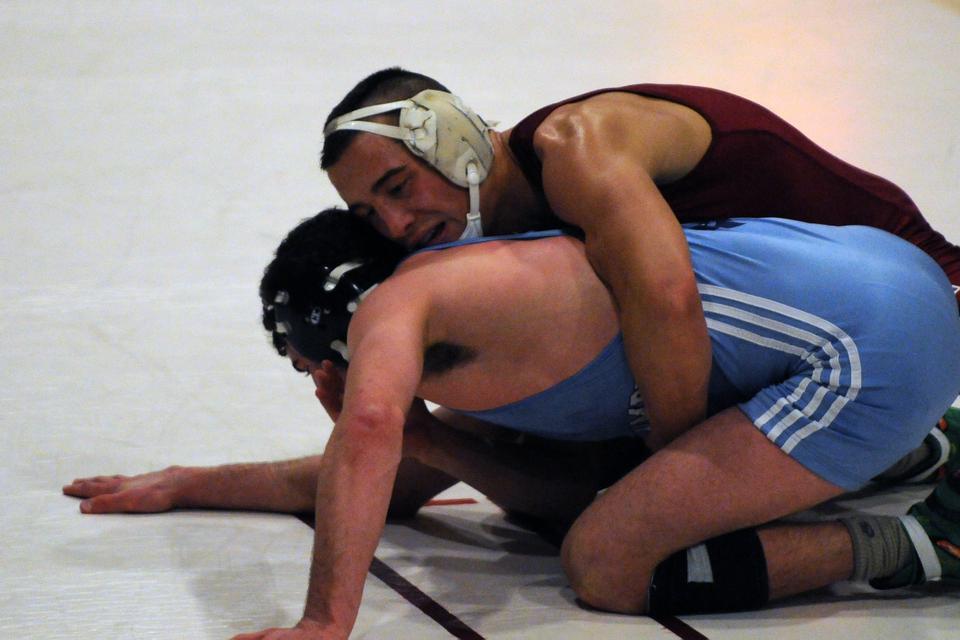 Co-captain Corey Jantzen, shown here in earlier action, returned from injury Friday to wrestle for the first time since last January. The senior won both of matchups, including an upset over Rutgers grappler Mario Mason.
By Steven T. A. Roach, Crimson Staff Writer

Co-captain Corey Jantzen returned to competition after he had sat out the past two semesters due to injury. Jantzen earned victories in both of his matchups, including a win in overtime against No. 3 Mario Mason of Rutgers.

No. 5 junior co-captain Walter Peppelman also saw action again after suffering an injury at the Cliff Keen Las Vegas Invitational, picking up two wins by pinning both of his opponents. The two pins gave Peppelman 20 in his career.

“I thought we wrestled well against Rider,” Harvard coach Jay Weiss said. “Shifting from tournament competition to dual meet is a big difference, so I thought the guys responded well…It was nice to get the first win, and I wish we would have wrestled that way against Rutgers, but it’s still a good start.”

Despite suffering its first loss of the season at the hands of Rutgers (7-1), three Harvard wrestlers turned in winning performances to maintain a perfect record for the day.

Jantzen notched the biggest upset of the day when he topped the previously unbeaten Mason in overtime, 7-6. With the win, Jantzen improved his career record to 42-18.

“He was down, but then came back and just controlled the whole bout,” Weiss said. “That just shows a lot about where he’s at, and he’s just going to get better.”

Mason jumped out to an early 4-0 lead in the second period, but Jantzen earned an escape and a takedown to close in on his opponent and shave the lead down to just one point. After both wrestlers failed to score in sudden victory, Jantzen finished the comeback by with an escape and takedown to top the Scarlet Knight grappler.

No. 13 Keith also notched another win for the Crimson at 133 lbs. by beating Michael DeMarco of Rutgers, 2-0. DeMarco had previously defeated Keith’s fellow teammate, freshman Ryan Osleeb, at the Midlands Championships last week in a 14-2 major decision. After the Crimson forfeited the first bout at 125 lbs, Keith’s victory halved the Scarlet Knight’s six-point advantage.

Peppelman was the only other Harvard wrestler to earn a win in action against Rutgers. Peppelman pinned Dave Seidenberg of Rutgers at 1:38 to seal his 11th victory of the season. The win tied the score at 12-12, but the Scarlet Knights would go on to win the next five matchups to clinch the dual match in a decisive fashion.

The Crimson scored its first victory of the season with six wrestlers winning their bouts, one by major decision and another by fall. Jantzen came strong in his first matchup in a year, sailing to victory in a 10-0 major decision over Connor Brennan. Jantzen earned four takedowns en route to his win, two in the first period and one in each of the second and third periods.

After Harvard forfeited the matchup at 125 lbs., Keith notched a 4-1 decision over Jimmy Morris to decrease the deficit to 6-3. Keith’s win brought his career record to 60-35, though he would tack on another victory later in the day against DeMarco.

Trailing 9-7 in the overall score, Peppelman put Harvard back in the lead by scoring his first of two falls for the weekend, pinning Ramon Santiago at 1:09. With the win, the Crimson moved into the lead, 13-9.

“I feel like I wrestled pretty well,” Peppelman said. “I wasn’t sure I was ready and my coaches did a good job of pushing me to wrestle those two matches. They were good wins for me and they helped build my confidence back up.”

Yet Rider pulled ahead once again with victories at 165 lbs. and 174 lbs. The Crimson rebounded and sealed the matchup by winning the final three bouts. Sophomore Cameron Croy earned a decision over Brandon Lintner, 10-4, and increased his career record to 25-26. Freshman James Fox pulled out another 4-0 decision against Donald McNeil, and heavyweight freshman David Ng finished off the dual by edging Evan Craig, 3-2.

According to Weiss, the Crimson still needs to improve to win against some of the competition it will face this season. But after finishing last year with a 2-15 record, a win early on is certainly welcome for Harvard.

“It’s not where we want to be, but we’re getting there, that’s for sure,” Weiss said.