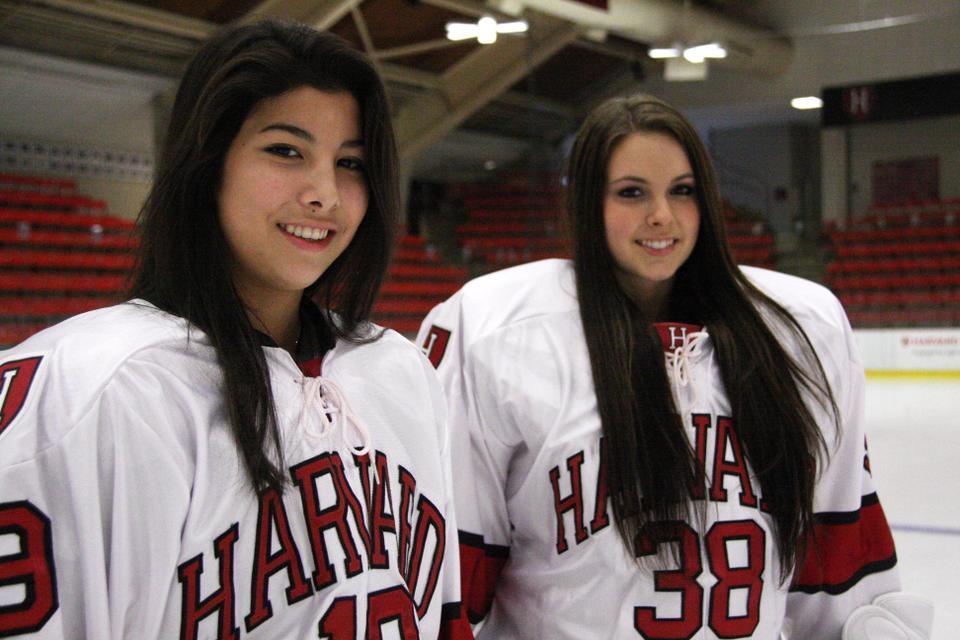 After competing against each other at the 2012 Women’s World U-18 Championship, freshmen Miye D’Oench (left) and Emerance Maschmeyer are now teammates.
By Claire K. Dailey, Crimson Staff Writer

When freshmen Emerance Maschmeyer and Miye D’Oench stepped onto the ice for the final game of the 2012 Women’s World U-18 Championship in the Czech Republic, they were opponents. Three months after Maschmeyer and Canada defeated D’Oench and the United States, the duo will share the ice again, this time as teammates.

Maschmeyer and D’Oench are two of the Harvard women’s hockey team’s seven rookies, a group that is expected to play an integral role in the Crimson’s attempt to live up to its No. 9 preseason ranking.

“We’re going to have to step up and make a difference,” freshman forward Jessica Harvey says. “But at the same time, we’ve got a great group of veterans that will really carry us through.”

Harvard coach Katey Stone has confidence in the rookies’ ability to make an immediate impact.

“Sometimes it takes young kids a while to get up to speed—grasp the culture—but I don’t think that’s been a problem at all,” Stone says. “They work hard off the ice; they work hard on the ice.”

The Crimson rookies add significant depth at the forward position. D’Oench and Harvey are joined by freshmen Dylanne Crugnale and Mary Parker in adding to an already dominant offensive attack led by co-captain Jillian Dempsey and junior Lindsay Fry.

Crugnale and Parker, who attended the nearby Noble and Greenough School, both captained their respective club teams in high school.

“The team is very driven and is all about hard work,” says Parker, whose sister Elizabeth is a junior forward on the team. “No other team in the league is going to outwork us. The team and the coaches are like one big family, and [we] are all working together towards the same goal.”

Along with earning a silver medal at World Championships, D’Oench also captained her U-19 club team for two years.

“The biggest difference [in college] is having a team of equally dedicated players, across the board,” D’Oench said. “The intensity has picked up five notches.”

Following a series of preseason injuries to senior Josephine Pucci and junior Marissa Gedman, Harvard’s defense has taken a hit.

“We’ve got spots to fill now,” freshman goalie Molly Tissenbaum says. “I think more than anything we’ve now got a fire lit under the whole team.... We’ve got to work for the whole season because those spots aren’t easily filled.”

Freshman Abigail Harris, who co-captained her club team in Ohio, is the Crimson’s only rookie defender. But the Crimson added two goaltenders, Maschmeyer and Tissenbaum, who will back up co-captain Laura Bellamy in goal.

“We have two good goalies that came in,” Bellamy says. “It’s just adding to the competition, and it’s going to make us better. In practice, it’s not only making [our]offense better, it pushes me everyday.”

Recording a shutout in her gold medal victory over the United States at the 2012 World Championships, Maschmeyer won gold at the Canada Winter Games for Team Alberta in 2011 and the Alberta Winter Games in 2009.

In late August, the goaltender was named to the Canada U-22 team for a series of games against the United States.

“Last year, I played away from home,” Maschmeyer says. “I played on a junior men’s team, Lloydminster, so I think for me the transition [to college] wasn’t as hard.”

Crugnale and Harvey both found the transition to ECAC play to be smoother because of their high school experiences. Attending the North American Hockey Academy, Crugnale’s academics have consistently been mixed in with large amounts of time on the ice.

Harvey, on the other hand, lived nowhere near where she played. The forward from Norfolk, N.Y. travelled to Canada four times a week just to play for the PWHL’s Ottawa Senators.

“I knew that the best hockey was in Canada, and that’s what I had to do to get to the next level,” Harvey says. “It was pretty rough on my mom and me to go to Canada all of the time, but it was worth it.”

That same kind of drive to excel will be key to Harvard’s success this season.

“Stepping onto the ice for the first time with a Harvard jersey on, that’ll be pretty amazing,” Harvey says.

—Staff writer Claire K. Dailey can be reached at ckdailey@college.harvard.edu.