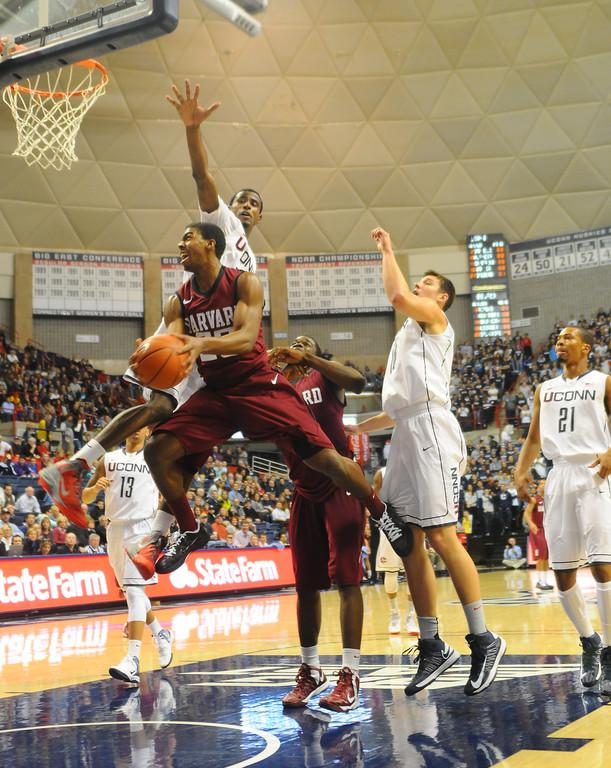 Harvard men’s basketball’s 65-64 win over Boston University at Lavietes Pavilion featured 13 ties, 18 lead changes, and a wild final 30 seconds that could have gone either way.

After a Terriers timeout with half a minute to play, junior guard D.J. Irving hit a mid-range jump shot with 19 seconds left in the game to give him 24 points on the night and his team a one-point lead with less than a full possession left on the clock.

The Crimson could have chosen to take a timeout with one more chance to re-take the lead. But as he has done before, Harvard coach Tommy Amaker opted for a quick in-bound play.

“We love doing that. That’s our philosophy,” Amaker said. “You want to catch the defense broken and open-floor. You don’t want them to feel like they can get set.”

With less than ten seconds left in the game, freshman guard Siyani Chambers penetrated, found an opening, and hit a short go-ahead jumper from the right side which doubled as the game winner and the biggest shot of his young career.

“I came off the ball screen trying to first create for my teammates, but then when the shot opened up, I just took the shot,” Chambers said.

But Chambers left just enough time on the clock to give Boston University one more chance at the win and yet another second-half lead change. The Terriers inbounded to Irving, who moved up the court, gained separation from sophomore Wesley Saunders, slipped just a bit, and took a shot at the buzzer that clanked off the rim.

Irving had enough of an opening that he could very easily have made the shot, but despite his open look, Amaker said that the Terriers’ chance at the buzzer-beater will not change the team’s strategy going forward.

“You don’t want to foul,” Amaker said of Boston University’s last-minute shot. “You’re just trying to keep the ball in front, and that’s hard to do against their team. You can see how quick and fast those guys blow it up the floor.... We were fortunate.”

Tuesday’s win was Harvard’s first one-point game since its 55-54 loss to Penn last February at home.

Sophomore center Kenyatta Smith started early in the season, but after three consecutive games with three turnovers against Saint Joseph’s, Vermont, and Fordham, Smith saw no action in the team’s two most recent games at Boston College and at UConn.

But coming off the bench for the first time since Dec. 1, Smith played 16 minutes in which he excelled.

Smith scored six points on the night, including two late free throws with 2:35 left in the game to give Harvard a 62-60 lead. He also registered five blocks—many, again, coming in the middle of a back-and-forth second half—and a dunk that helped to get the crowd of 1,257 into the game.

“We’ve told him to keep his spirit right and his mind ready to go when we need him,” Amaker said. “We certainly thought we needed him tonight.... He really gave us a lift and did an outstanding job getting defensive rebounds.”

Smith’s playing time on Tuesday—his most since the Nov. 27 home game against Vermont—came largely at the expense of sophomore forward Steve Moundou-Missi, who played only five minutes, his lowest total so far this season.

At the end of the first half, Harvard trailed 32-25, largely because of an abysmal 0-for-8 performance from beyond the arc. Boston University fared little better—the Terriers shot 2-for-8 in the frame—but rode nine fast-break points to Harvard’s two to take the seven-point halftime lead.

But at the start of the second half, the Crimson’s shooting improved immediately, starting with a three-pointer from Chambers to pull Harvard back within four.

The Crimson made its first five attempts of the half, and Harvard reclaimed the lead for the first time in the half six minutes into the period on another Chambers three.

The team’s shooting cooled down a bit as the half went on, but the Crimson still finished the half shooting an impressive 7-for-9 from beyond the arc. Chambers and co-captain Christian Webster each made three in the second half.

“Things can become contagious real quick—either way,” Amaker said of Harvard’s three-point shooting. “I thought that was probably what happened in both halves for us.”