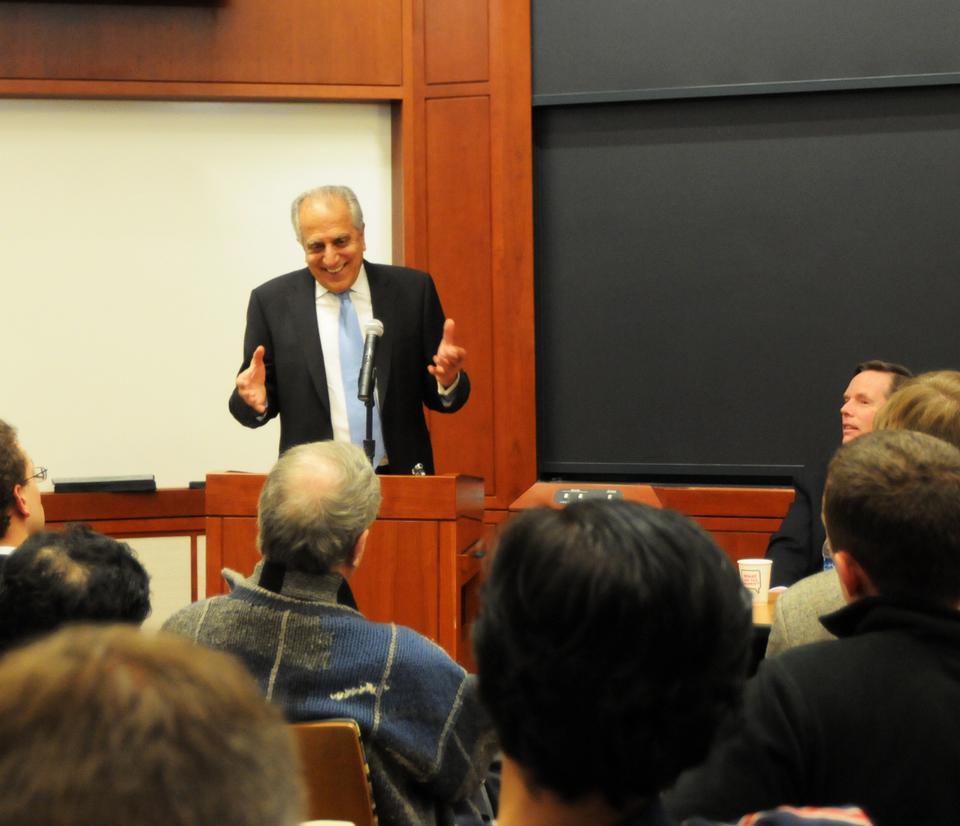 Zalmay Khalilzad, the former US Ambassador to the UN, speaks about Afghanistan at the Harvard Kennedy School of Government.
By Amanda E. McGowan, Contributing Writer

Peace in Afghanistan may be best achieved by involving a coalition of major world powers as well as the nation’s geographic neighbors, former United States Ambassador to the United Nations Zalmay M. Khalilzad said Thursday at a lecture organized by Harvard’s South Asia Initiative.

Khalilzad, who also served as the Bush administration’s ambassador to Afghanistan following the initial expulsion of the Taliban, advocated formulating a peace plan that took into account not only domestic conditions, but also the larger geopolitical problems plaguing the region.

He likened the relationship between Afghanistan and its neighbors to the power struggles that plagued Europe during the 19th century.

“I have felt at times that this is like old Europe—people feel that in the weaknesses of their neighbor, there are opportunities,” Khalilzad said.

In particular, Khalilzad emphasized the importance of working with Pakistan in order to ensure a long-term peace by preventing a return of the Taliban to the region.

“Without Pakistani support...it will be very difficult to get a complete peace process,” he said.

Khalilzad was also frank on the subject of past U.S. policy missteps, referring to his own involvement in a controversial policy of arming the mujahideen, a group of militant Afghanis, during their insurrection against the Soviet occupation in the 1980s.

“It was interesting to see that Ambassador Khalilzad has recognized the mistake the U.S. has made in the 1980s in funding the mujahideen,” said Dan Orbach, a graduate student in the history department who attended the lecture.

In light of these controversial past policies, Khalilzad cautioned American policymakers against trying to exercise too much control over affairs in Afghanistan.

“Look, let them figure this out,” he said, emphasizing that a lasting peace plan would be the product of a broad coalition representing all Afghanis.... President Karzai cannot make the peace alone. He needs to bring the political forces of Afghanistan to the table.”

Despite these difficulties, Khalilzad remained cautiously optimistic while noting that the peace process was far from over.

“It will take a long time­­—as it did in Europe—for the region to become a normal region,” he said.