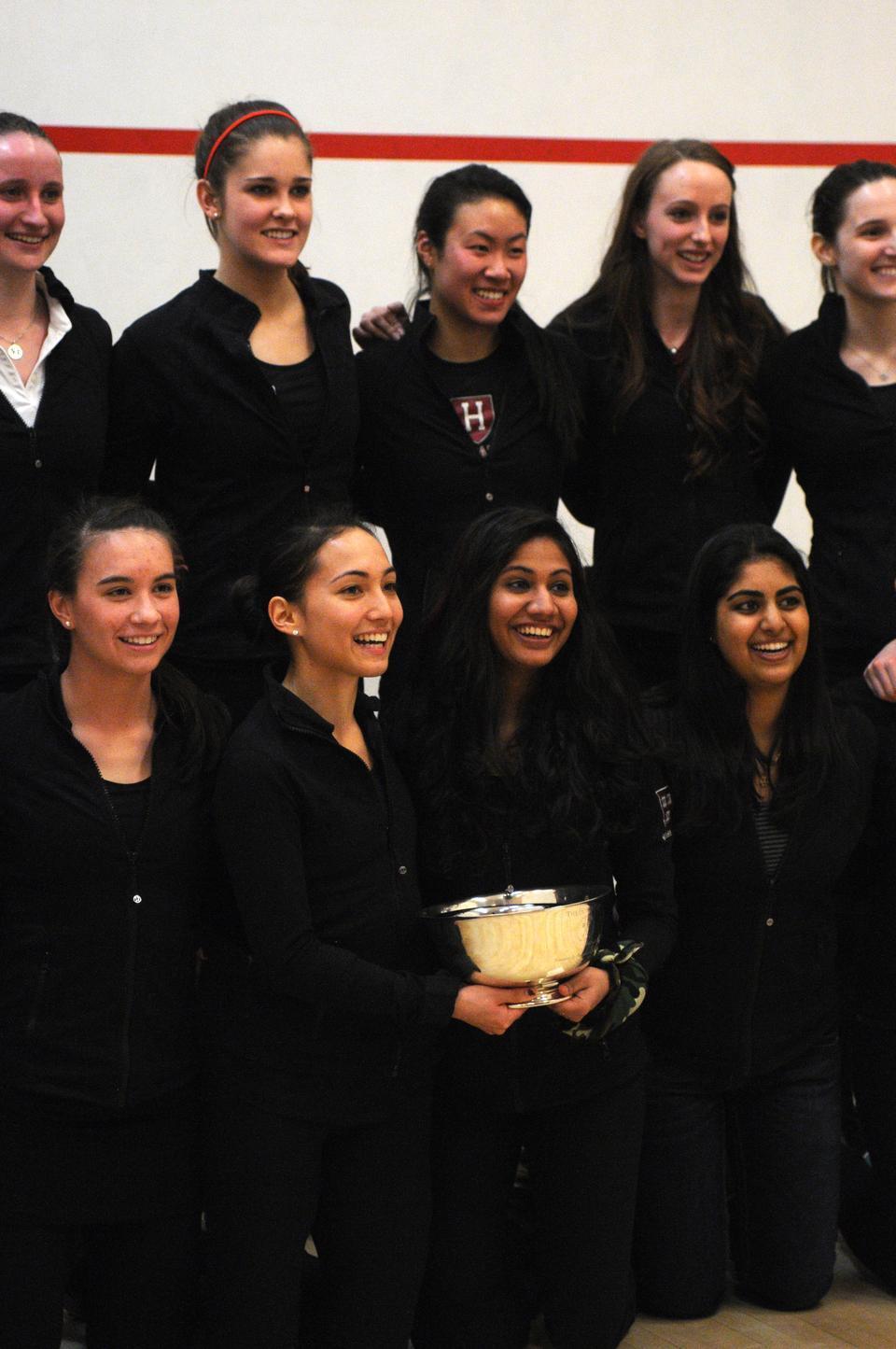 The Harvard women’s squash team topped three opponents in three days over the weekend to claim the CSA National Team Championships. After blowing past Dartmouth and Trinity, winning both by scores of 9-0, the Crimson met defending national champion Yale in the final and handled the Bulldogs, 8-1.
By Peter G. Cornick, Crimson Staff Writer

After a nail-biting 5-4 win two weekends ago in New Haven to take the Ivy League crown, the spectators at the Murr Center expected a similar battle when the Harvard women’s squash team found itself pitted against Yale for the College Squash Association National Team Championships.

But the matchup between the two historic rivals on Sunday was anything but even, as the No. 1 Crimson dominated the No. 2 Bulldogs from beginning to end, taking home the team’s 13th national championship, 8-1, in front of a fiery home crowd.

The Crimson won its three contests by a combined score of 26-1, sweeping Dartmouth on Friday and Trinity on Saturday, 9-0.

“All of the background stuff, all of the training showed up this weekend,” Harvard coach Mike Way said. “Everyone was ready to play physically, and with no injured players, it’s a testament to what our training program is all about. So all in all, I’m a happy camper.”

The scene as Cortes stepped off of the court and was surrounded by her teammates was not a raucous or uncontrolled, but rather a quiet and private celebration of a team which had finally accomplished its goal.

“On paper, we have always been the team to beat, and we just had to come and meet our potential,” Cortes said.

The result was in stark comparison to the matchup for the Ancient Eight crown, in which the Crimson had to battle back from 4-2 down and sweep the last series of matches to maintain its undefeated season.

Harvard started out on the right foot with Guruge making quick work of Nadas, earning the straight-set victory on the glass court, 11-2, 11-5, 11-9.

But on the other side of the Murr Center, Nadas’ Yale (17-2, 6-1 Ivy) teammates were making life hard for the Crimson.

Harvard freshman Megan Murray fell to freshman Issey Norman-Ross in straight sets in the No. 9 slot, and with the score tied at 1-1, junior No. 6 Natasha Kingshott was engaged in a competitive matchup.

Kingshott and Yale sophomore Gwen Tilghman battled deep into extra points, with the pair trading points back and forth. But Kingshott was able to pull away and took the second game, 19-17, to take the 2-0 lead. The junior finished out the match in a shorter third game, 11-6.

And with the Crimson in the early lead, the second round of matchups went all Harvard’s way.

Junior Laura Gemmell avenged her second collegiate loss, which she picked up two weekends ago in New Haven, downing sophomore Kim Hay, 11-9, 11-9, 15-13. Freshman Julianne Chu was also able to turn the tables on her Bulldog opponent. After dropping her previous matchup with sophomore Lilly Fast 14 days earlier, Chu took a 3-1 victory, giving the Crimson a 4-1 lead.

With Chu’s game over, Cortes found herself entering the fourth game with a 2-1 lead over Bellaine.

And with her team and the Murr Center watching, the Crimson co-captain took control of the match, storming out to an 8-0 lead before a stroke gave Bellaine her first point of the game.

Bellaine attempted to get back into the game, but after several dives to save points proved fruitless, both Bellaine and her team realized that their journey was over.

And after the Yale junior hit the tin to give Harvard the championship, Cortes looked up into the lights with relief before turning to face her opponent and greet her team.

“I was lucky enough to be that fifth person,” Cortes said. “But we won 8-1 today, and it was really a team effort.”

With the championship wrapped up, Harvard did not take its foot of the gas.

Junior No. 7 Sarah Mumanachit joined Sobhy as the only other undefeated Crimson player on the year, sweeping freshman Shuhui Mao.

Cortes believes her team’s preparation is what made the victory so definitive.

“The past two weeks, we’ve had to work really hard and take nothing for granted,” Cortes said. “We might have taken things for granted at the beginning of the season, but I think hard work and grit were the biggest things [for our success].”

Harvard swept through No. 5 Trinity (17-4) in the Howe Cup semifinals, comfortably booking its place in the finals with a 9-0 victory that included seven straight-set victories.

Clinching the contest in the first five individual matches, the Crimson still received some quality victories from its freshman to preserve the sweep.

Murray, playing in the No. 9 spot, found herself down 2-1 and survived several match points to battle back to take the fourth game. Murray took the deciding fifth game, 11-9, to earn the victory.

Chu had to survive a surge from Bantam senior Pamela Jimenez to keep the sweep intact. Though Chu took the first two games, Jimenez won the following two to force a fifth game. But Jimenez faltered in the final game, falling to Chu, 11-8.

Harvard began its quest for the Howe Cup with a perfect 9-0 win over No. 8 Dartmouth, as the Big Green failed to get a game off of the Crimson’s top nine players.

Harvard improved on its last meeting with Dartmouth (6-9, 2-5), as the Crimson dropped one match in Hanover last November. But this time, Harvard was able to achieve the perfect sweep and carry the momentum going forward in the tournament.