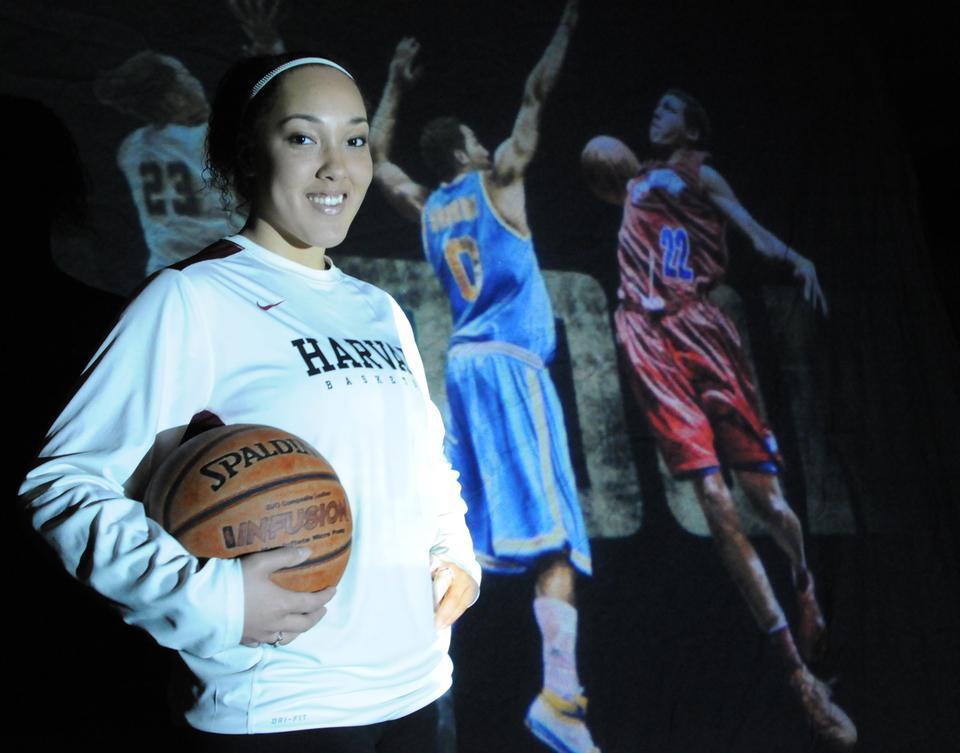 Sophomore center Elise Gordon—who is averaging 3.3 ppg on an impressive 50 percent from the field for the Harvard women’s basketball team this season in 23 appearances—comes from an athletic family.
By George G. Mills, Contributing Writer

Every father’s worst nightmare is losing a game of pick-up basketball to his child. Ed Gordon, father of Harvard sophomore Elise Gordon, is just happy to be a part of the spectacle.

That being said, a Gordon family game of two-on-two isn’t your typical backyard game of basketball. The three Gordon children, Drew, 22, Elise, 19, and Aaron, 16, put on quite the show behind their home in San Jose, Calif.

The Gordons have an impressive athletic resume. Drew, a senior power forward for University of New Mexico, is projected to be picked late in the first round of the NBA draft after stellar performances this season, including a double-double against No. 15 San Diego State and a 27-point, 20-rebound game against No. 11 UNLV.

Aaron has made headlines as a top-10 recruit nationwide and the No. 1 basketball recruit in California. As the power forward for Archbishop Mitty High School in San Jose, Aaron led the Monarchs to one state championship and has been called the next Blake Griffin. He has already garnered scholarship offers from New Mexico, Arizona, and Kansas.

Elise, a center on the Harvard women’s basketball team, has been fighting injury this season but holds some impressive achievements of her own. She won two California state championships in high school and benched pressed the bar 200 times in last years Bench Press for Breast Cancer charity contest—the most of any Crimson athlete.

“I have almost given up trying to win anymore cause my older brother is 6’10” and my younger brother is 6’8” and still growing,” said Elise, a government major in Pforzheimer House, who stands at 6’1” herself. “We have a little court in the backyard, and my dad is always trying to get in and trying to relive his prime and such. It gets competitive, but it’s always fun. My dad and I are on a team, and we have more of the fundamentals, whereas the boys have a bit more of the wow factor.”

Ed Gordon isn’t any slouch athletically either. After a college career playing basketball and football at San Diego State University, Ed went on to play a short stint in the NFL for the New England Patriots. He stands at an intimidating 6’6” in his own right.

“When I am home for too long my neck starts to hurt from looking up at everyone,” Elise said laughing.

The Gordon’s mother, Shelly Davis, is sidelined from the backyard games due to injury but was a talented hockey player in her youth.

“I am a Daddy’s girl all the way; They call me the princess in the middle, but my mom and I talk about everything together,” Elise said. “Dad still gets some solid baskets in the games, but he has come to grips with not being able to win all the time, while mom is sort of there with the camera and the hype. They are very supportive and just awesome.”

Despite the athletic success of their children, Elise’s parents say they tried to keep the Gordon children grounded.

“Raising them was a lot like any other kids I would have to imagine,” Ed Gordon remembered. “They were a bit more competitive in nature about everything, which was interesting and sometimes challenging, but they have been really easy kids. It was interesting to watch because sometimes I’d have to break it up and say, ‘Put the ball down, the game is over, let’s do something different,’ or else the level of competition would continue to escalate and what would start out as a fun game of horse would turn into a hard post-up or a hard slam-dunk.”

But the Gordon household is not just an incubator for athletic success and competition.

“[Growing up] was fun. It definitely got competitive, but the cool thing was that we are all so supportive of each other,” Elise said. “We would help each other out on our skills. It gets a little tense because we all want to surpass one another, but we are also always at one another’s sporting events supporting one another.”

Elise also says she grew up in an environment that fostered individual growth.

“It’s the old cliché ‘I can hit my brother or sister, but you better not.’ They are each other’s worst critics,” Ed said. “If they see something they don’t bite their tongues, but it is understood that it is all out of love. They expect the most from themselves and the most from one another.”

With Aaron still in California, Drew in New Mexico, and Elise at Harvard, the Gordons have managed to remain close despite the huge distance.

“It’s cool, you know, we always are texting each other ‘good job’ or ‘good luck,’” Elise said. “We are always in contact and keeping up with each other’s stat lines.”

Elise’s decision to come to the Crimson was not only based on her athletic prowess, but also her academic success.

“Well it wasn’t that hard of a decision for her to come to Harvard—I mean it is Harvard.” Ed said. “I think she was looking for something a bit more academic, and when Harvard contacted us that kind of became a no-brainer.”

With the success of her brothers as motivation, Elise is looking to improve her game and contribute both on and off the court for the Crimson.

“Well, off the court and on the court she of all three kids is the most headstrong in terms of once she gets something into her head, an idea of what she wants to do, she can’t sit on it,” Ed laughs. “She can be worked with, but she will get her goals done. She is very personable but very hardworking and a very special person. But I’m a dad.”