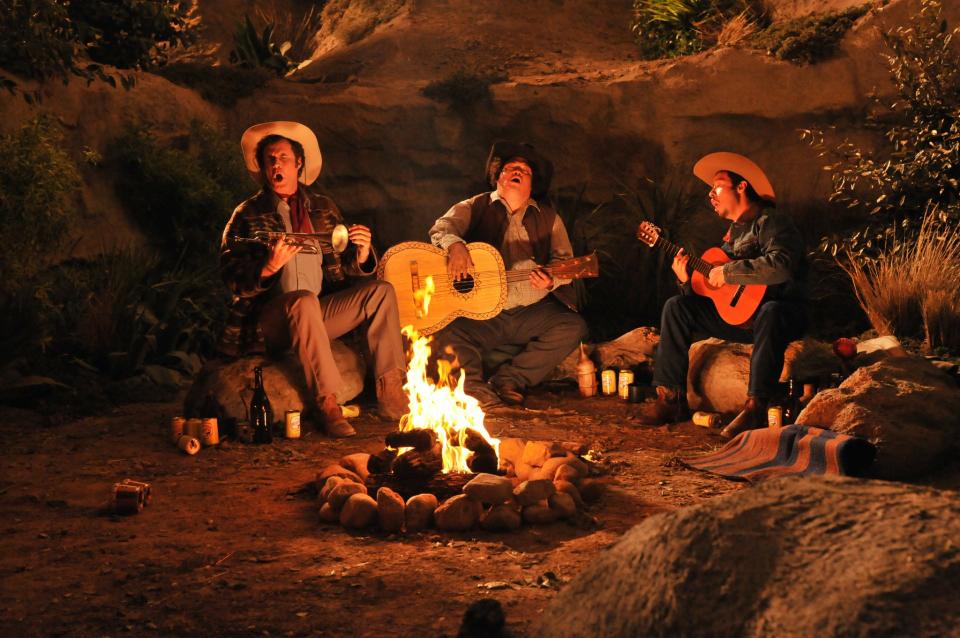 Will Ferrell, starring in “La Casa de mi Padre” as Armado, sings alongside Manuel (Adrian Martinez), and Esteban (Efren Ramirez) during one of the comedy’s scenes.
By Rebecca J. Mazur, Crimson Staff Writer

Four or five years ago, Will Ferrell had a spontaneous idea. He thought it might be funny to make a film in Spanish. He has realized this daydream in his new movie “Casa de mi Padre,” in which he stars as a dim-witted Mexican ranchero and stars alongside a cast of predominantly Spanish-speaking actors.

“I felt like you hadn’t seen that,” he said in an interview with The Crimson, “You hadn’t seen an American comedian really commit to a foreign-language movie.” Though “Casa” may share a loose plot formula with Ferrell’s past films, the concept presented a host of new challenges and opportunities to the experienced comedian.

Prior to starting work on “Casa,” Ferrell didn’t speak Spanish. “I didn’t want the joke of this movie to be that I spoke Spanish badly,” he said. So he had to focus a great deal on pronunciation and memorization. Even more difficult, Ferrell had to speak in Spanish while also being funny. To better express the humor of the film—and perhaps also because screenwriter Andrew Steele is American—the script was written first in English and then translated. “Once you know what you’re saying, you can put the right emphasis in the right places,” Ferrell said.

One of the film’s main sources of thematic inspiration also influenced Ferrell’s acting style. “Casa” replicates the ambiance of over-the-top, melodramatic telenovelas, commonly known as Spanish soap operas—which Ferrell claims to watch “every weekday from 11 in the morning till 4 in the afternoon.”

“I knew that the more dramatic I could be [and] the more serious I could be, that would probably be funnier,” he said. Ferrell has historically incorporated improvisation into his work, but the language barrier made spontaneity less of a possibility. “It drastically reduced moments for verbal improvisation, so I had to rely on little physical moments and reactions,” he said.

Part of Ferrell’s original idea for the movie was that he would be the only non-Mexican—or self-described “gringo”—in the cast, so in “Casa” he worked with Spanish language stars Diego Luna, Gael Garcia Bernal, and Genesis Rodrigues, who he said helped him assimilate into his character’s culture. They also gave him a more nuanced sense of Mexican humor.

“Some of the quote-unquote ‘Mexican’ comedy I’ve seen is really over the top, and yet from talking to Diego, [Mexican writers] really appreciate subtle humor,” Ferrell said. “Obviously there are going to be cultural things that you can never compare, in terms of different countries’ style of humor.” Nonetheless, he has found that certain themes and physical humor translate well.

“Casa” fits with Ferrell’s past work in that it is unexpected and somewhat experimental. “I always try to keep people guessing and mix things up a bit,” he said. Ferrell compares the film’s absurdist quality particularly to that of his 2004 hit “Anchorman.”

“[Casa] has a similar feel in a way where we sort of threw all the rules out of the window,” he said. Ferrell thinks the new film will be a pleasant surprise for his fans. Despite America’s cultural tendency of not coming out to the theaters to see foreign films with subtitles, Ferrell sees the subtitles as a something that will draw the audience in. “You really have to pay attention because it’s subtitled, so you are forced to lock into the story,” he said.

However, Ferrell is humble about his aspirations for his newest creation. “It would be hysterical to me if this movie became a little cult hit and we could make a sequel or could make like a series of them. That would be really fun,” Ferrell said. If that doesn’t work out, though, he is considering some other projects.

“There are a billion Chinese. Maybe I’ve got to do something in Chinese—that’s the next market to conquer,” he said.

—Staff writer Rebecca J. Mazur can be reached at rmazur@college.harvard.edu.