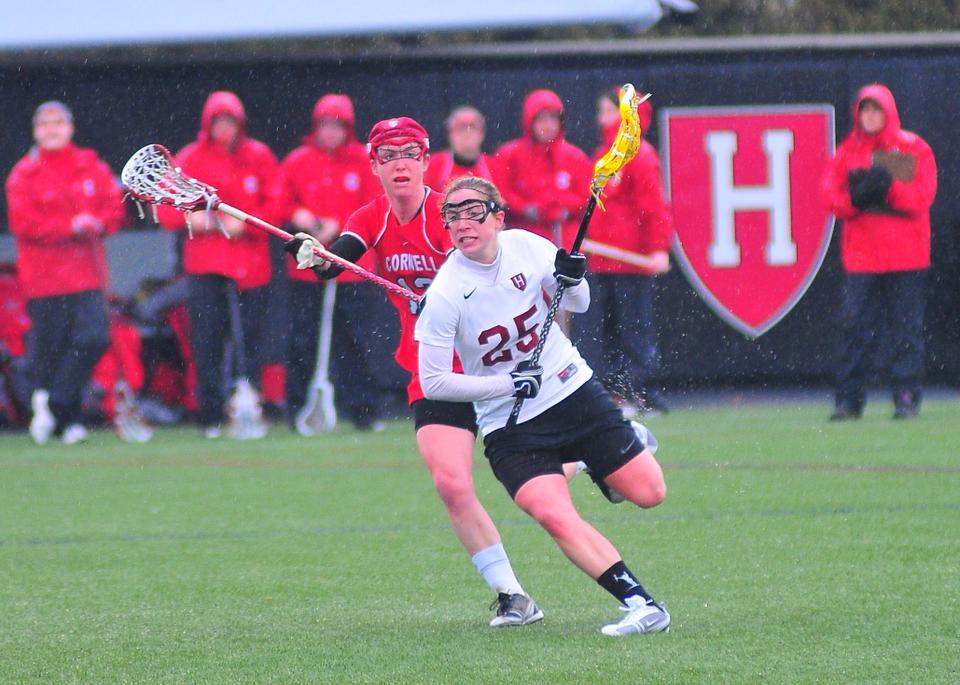 Junior midfielder Danielle Tetreault, shown here in earlier action, scored Harvard’s winning goal in sudden-death overtime against the Dukes Tuesday afternoon. The non-conference win was an important rebound for the Crimson, which lost to Ivy-rival Cornell last Saturday. By Steven A Soto
By B. Marjorie Gullick and Marina E. Watson, Crimson Staff Writers

As the Crimson men’s basketball team anxiously awaited its destiny in the result of the Ivy title determining Penn-Princeton match, the Harvard women’s lacrosse team (2-1, 0-1 Ivy) took its fate in its own hands, earning a double-overtime victory over No. 13 James Madison (3-2) Tuesday afternoon.

The 9-8 finish was the first overtime win the Crimson has garnered in two years, with the last coming in a 10-9 victory over New Hampshire in March of 2010.

A scoreless preliminary overtime forced the teams into a second overtime period. But this time, it was sudden death.

“We knew the next draw control was going to be huge,” said junior midfielder Danielle Tetreault.

With the clock reset at three minutes Tetreault quickly controlled the draw—tallying Harvard’s 13th of 21 draw controls in the contest against the Dukes— and the Crimson’s offense took shape.

A James Madison foul provided senior co-captain Melanie Baskind a free-position shot on goal from the eight-meter, and a chance to win the game, only to have it miss wide.

But Harvard maintained its composure and was able to connect a string of passes, setting-up a second scoring opportunity in the do-or-die situation. Tetreault found the back of the net with 1:39 remaining in the second overtime period to give the Crimson the win over the Dukes after more than 72 total minutes of play.

“It was all about off-ball movement—because of the movement, a lane cleared and I was able to take [the final shot],” Tetreault said.

Tetreault‘s game-winning goal was the fifth game-winner of her career and her fourth goal of the season. The midfielder also contributed a game-high five draw controls against James Madison.

“We can always trust Danielle in those situations,” Baskind said. “She looked confident with the ball in her hand, and she pulled a great move on the goalie…. It was a good feeling to put a cap on [the game].”

Senior Jess Halpern also logged a record-setting game, scoring her 116th career goal off of a hat trick in the match, and moving into the seventh spot in the rankings of most hat tricks in Harvard history and into the ninth all-time for the school in career points with a total of 138 goals.

The win comes off the heels of a 12-6 conference loss to Ancient Eight rival, Cornell, on Saturday afternoon.

“It was an important win for us bouncing back from Cornell,” Baskind said. “We spent a lot of time talking about what went wrong and things that we wanted to fix. And there was an excitement for [Tuesday’s] game that hadn’t been there for the previous two.”

The Crimson seized control of the game against the Dukes from the first whistle with back-to-back goals from Halpern and Baskind, just 3:46 into the match. James Madison bounced back with a pair of its own goals, leveling the score at two before Halpern and senior Tyler Petropulos answered with a one-two punch within 50 seconds of each other, recapturing a two-goal advantage.

A big save by rookie goalie Kelly Weis opened the door for Halpern to find the back of the net for the third time in the opening period, giving Harvard a 5-2 edge. The Dukes diminished the deficit before the half, notching two goals to end the frame, making it a tight 5-4 match.

Harvard struck early in the second half, re-establishing a two-goal advantage with a tally from Baskind. The Crimson and James Madison exchanged goals to make it 6-5 before Petropulos, with assists from sophomore Chelsey Newman, was able to widen it to a three goal gap—its largest of the match—with two of her own scores.

But the Dukes were not ready to bow out just yet.

James Madison lit up the scoreboard with three unanswered goals to send the game into the first of two overtimes, the tying score connecting with the net with just 28 seconds remaining in regulation play.

Harvard’s 15 turnovers on the day—more than twice as many as its opponents—allowed the Dukes to convert and close the gap between the two teams.

“Turnovers definitely hurt us,” Baskind said. “It’s something we’ve been struggling with and we need to continue to work on.”

But the Crimson didn’t let the late stalemate kill its momentum.

“We knew it wasn’t over. They scored the goal to tie, they were the ones fighting back,” Tetreault said.

Both teams struggled to score in the first overtime period—despite three on-goal attempts from Harvard—extending the contest into a second overtime period.

But this time, the Crimson put an end to the drought and secured the victory, with Tetreault’s game-winnning goal scored with 1:39 left on the clock.

The duo of Petropulos and Halpern led Harvard’s scoring with a hat trick each, while Baskind performed on both sides of the field, contributing two goals to the Crimson’s cause and logging a game-high three ground balls.

—Staff writer Marina E. Watson can be reached at mwatson@college.harvard.edu.