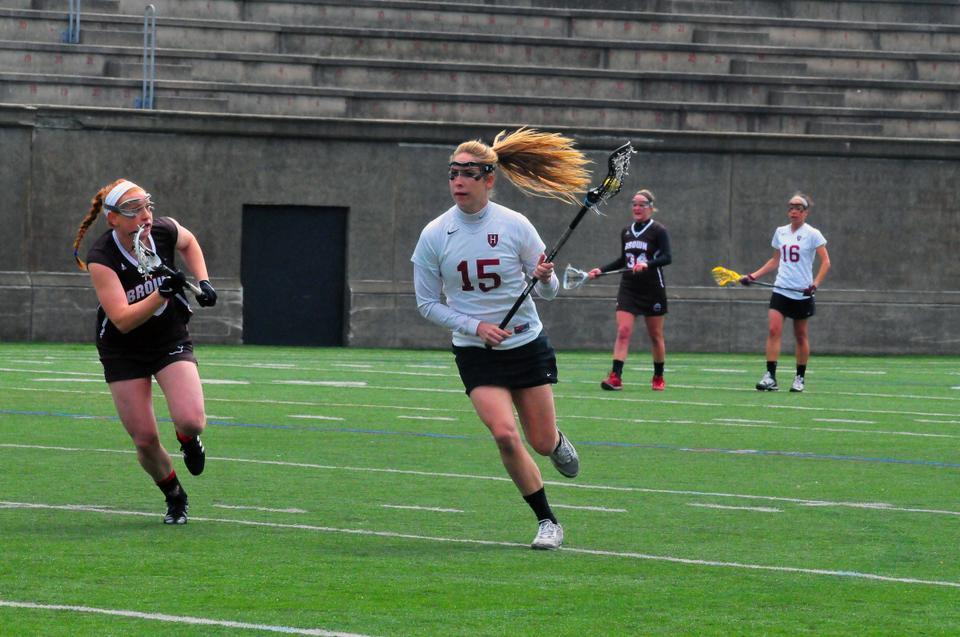 Junior Jennifer VanderMeulen leads the Crimson into a Saturday-matchup with third-place Princeton. This rematch of the 2011 Ivy League Championship game is a must-win for Harvard’s postseason aspirations.
By Madeline More, Contributing Writer

For the Harvard women’s lacrosse team, this weekend’s matchup with Princeton is of the utmost importance.

“This is probably the biggest game of our season,” junior attacker Jennifer VanderMeulen said. “It’s definitely going to be huge.”

The fate of the Crimson (6-6, 2-2 Ivy), which hosts the Tigers (6-5, 3-1) at Harvard Stadium on Saturday afternoon, rests very heavily on the result of this game. The Crimson is currently in fifth place in the Ivy League, while Princeton sits at the number three spot. The league’s top four finishers at the end of the regular season receive a bid to the Ivy League tournament, where the winner will receive an automatic berth in the NCAA tournament.

A Crimson win over the Tigers would put the two teams in a tie for fourth place.

“We know that this is a crucial game for us to win so that we are still in the running to go to the Ivy tournament,” senior attacker Jess Halpern said. “We want to be able to get into the tournament on our own fate—we don’t want to have to wait on the [chance] of other teams losing.”

For Harvard, which entered the 2012 season ranked No. 19 in the country, a chance to play in the Ivy League tournament—and potentially the NCAAs—is something the team has looked forward to all year.

“We dropped some games in the beginning of the season to some top-ranked teams, and that wasn’t ideal,” said VanderMeulen, whose squad’s non-conference losses likely eliminated its shot at an at-large bid. “But [winning] the Ivy League is an automatic bid. So that’s just kind of the goal right now–grab that bid and go to the NCAAs.”

If the Crimson were to get to the NCAA tournament, it would be its first appearance since 1994.

“To be able to get into the NCAAs would be amazing,” Halpern said. “No one on this team has ever had that opportunity, and we know Harvard lacrosse has been there in the past. In the ’80s and ’90s they made it to the NCAAs all the time, so it’s definitely a point that we want to bring the team back to.”

To get this chance Harvard will have to overcome a strong Princeton team which suffered its lone Ivy loss to fourth-place Cornell by one goal two weeks ago.

One player Harvard will have to pay attention to throughout the game is Tiger freshman Erin McMunn, last week’s Ivy League Player of the week. Against Temple on April 4, McMunn set a Princeton record for assists in a game with six in addition to scoring a goal. McMunn followed that up three days later with a goal and two assists in Princeton’s win over Yale.

The Crimson has shared two common opponents with the Tigers this season—Yale and the University of Virginia. While the Crimson’s game against Yale was a close match that resulted in a 7-5 Harvard victory, the Tigers soundly handled the Bulldogs, defeating them, 12-4. Princeton also bested the Cavaliers, 9-7, while the Crimson fell to Virginia, 12-6.

Despite the Tigers’ success, Harvard hasn’t been thinking too much about Princeton–practice this week has been all about its own game strategy.

“We’re going into practice these next few days really focused on fixing the small stuff,” said VanderMeulen, who scored two goals in the Crimson’s 10-4 win over Holy Cross on Wednesday night. “We’re kind of more focusing on ourselves and kind of preparing ourselves for this game.”

As if the postseason implications didn’t make Saturday’s matchup intense enough already, it is also a rematch of last year’s Ivy League Tournament championship game. In the 2011 tournament, the Crimson lost to the Tigers, 12-10, after leading by a goal with just over 10 minutes to play.

“Losing in the final game of the tournament is no fun,” VanderMeulen said. “We don’t want that same feeling, and we’ve been working hard to get that game back, and I think Saturday will be a great opportunity to get us a little bit of redemption.”

“[Losing last year] is just another thing to give us ammunition for this game,” she said.