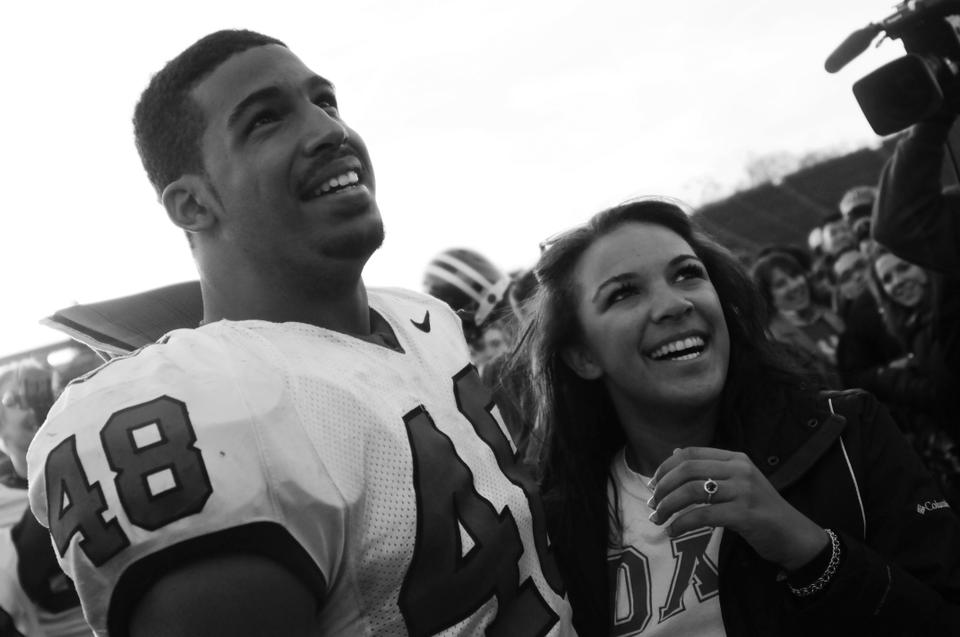 The 128th playing of The Game quickly became all about The Proposal.

After the Harvard football team trounced Yale, 45-7, defensive tackle Josue Ortiz ’12 still had one last play to make. As the crowd flooded the field, Ortiz found his longtime girlfriend, Kayci Baldwin ’14, and without wasting any time got down on his knee.

“It took a while to find her, but when I found her, she was completely flabbergasted,” Ortiz said. “She was shocked—it was awesome. It went perfectly.

Baldwin was so shocked that she doesn’t remember what Ortiz said, but his intention was clear. With friends and family surrounding the couple, Baldwin said yes, and she hugged her soon-to-be husband.

“It was such a rush, such a surprise,” Baldwin recalls. “Then a lot of things afterwards made sense. Throughout the day, my mom kept fixing my hair, and I would be like, ‘Mom, we’re at a football game, what’s the big deal?’... I don’t understand why everyone was trying to get me to look cute for this game, but then afterwards, I was like, ‘oh, now it makes sense.’”

The video of the proposal went viral, with media outlets like ESPN featuring the surprise engagement. It was a fairy tale ending for Ortiz’s football career, which culminated in a lopsided victory over rival Yale and the Ivy League trophy.

The love story began three years ago when Ortiz and Baldwin met at a church conference in Virginia Beach. The normally reserved Ortiz was not exactly sociable during their first encounter.

“I went to introduce myself to him and tried to talk to him, but he was completely not having it at all,” Baldwin remembers. “He was nice, but he wasn’t interested in talking—he was reading the news on his computer.”

A high school senior then, Baldwin friended him on Facebook, and eventually the two started talking more and more, especially as Baldwin was applying to Harvard. She got in, but the two didn’t begin hanging out as soon as Baldwin stepped onto campus.

It took a couple of months, but Ortiz finally reached out to her for a meal at Annenberg. It then became a weekly thing, and after a couple of months of getting to know each other better, the two started dating.

Despite Ortiz’s commitment to football and time spent away from each other—Ortiz took a semester off and spent the past couple of months in New Jersey training for the NFL—the couple has overcome these hurdles during their year-and-a-half-long relationship.

“We’re both very devoted to our faith, and us being in the church made us come together and is something that we grow towards,” Ortiz says. “Our faith helped us overcome all our obstacles and made this relationship happen.”

The couple will be wed on July 7 in Cleveland, Ohio. Baldwin will return to Harvard in the fall, while Ortiz, having graduated in the fall, will continue to pursue his dream of playing in the NFL.

“I’m looking to graduate as quickly as possible,” Baldwin laughs. “So much is up in the air right now … We’re getting married young, but we also would like to start a family young, so we’re definitely just eager to see where life takes us and open to wherever that may be.”