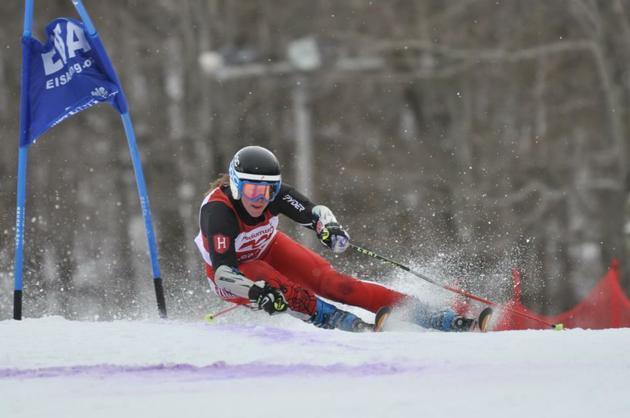 When Rebecca Nadler took sixth place in the giant slalom in the first weekend of the 2012 Eastern Intercollegiate Ski Association Carnival season, Harvard alpine coach Tim Mitchell said it was as impressive a finish as he’d seen her post, making it, by extension, as strong a result as a Crimson alpine skier had registered at an EISA carnival.

It turned out that the sophomore was just getting started.

Over the course of the 2012 season, Nadler kept achieving larger milestones for the Harvard alpine skiing team, giving it its first podium finishes with back-to-back second-place performances in giant slalom events and, at the Williams Carnival, a first-place finish.

It marked the first time a Crimson alpine skier had won a Carnival and the first time since 2004 that any skier from Harvard had done so. The win, combined with a third-place finish in the slalom event, put her in the lead for total points among EISA skiers.

“When I saw the results, it took a while for it all to sink in,” Nadler says. “I had some friends around and they came up to me after the race and said, ‘Becca, you won.’ I said, ‘No I didn’t….’ It was an incredible feeling the support, especially with my parents here, and my coaches and friends. It was absolutely incredible.”

But the setback soon became water under the bridge at the NCAA Championships, where Nadler won the giant slalom event, giving the Crimson its first national title in the sport. The sophomore followed it up with a seventh-place finish in the slalom for another All-America honor.

“I think my individual season was pretty incredible,” Nadler says. “To say I’m happy about how things went is a huge understatement.”

Adding to the significance of the event was the fact that Nadler, who grew up on the slopes of the East, was able to win the title while racing on the vastly different snow of the West.

“Heading out for Montana, I wasn’t totally sure what to expect, or where I would measure up to girls in the West,” Nadler says. “I tried to just focus on what I’ve been doing all year, go in, and have fun.”

Not only was her season historic by Harvard’s standards, Nadler also made substantial strides in her own performance. Nadler kicked off her rookie campaign with a fourth-place finish in the giant slalom, but much of her season was plagued by injuries and illness. While Nadler ended the year with a 20th-place finish in the slalom, she took second-to-last in her preferred event, the giant slalom.

This year, by contrast, Nadler gained steam over the course of the season, posting better and better finishes and making the biggest statement of her career on the NCAA’s biggest stage.