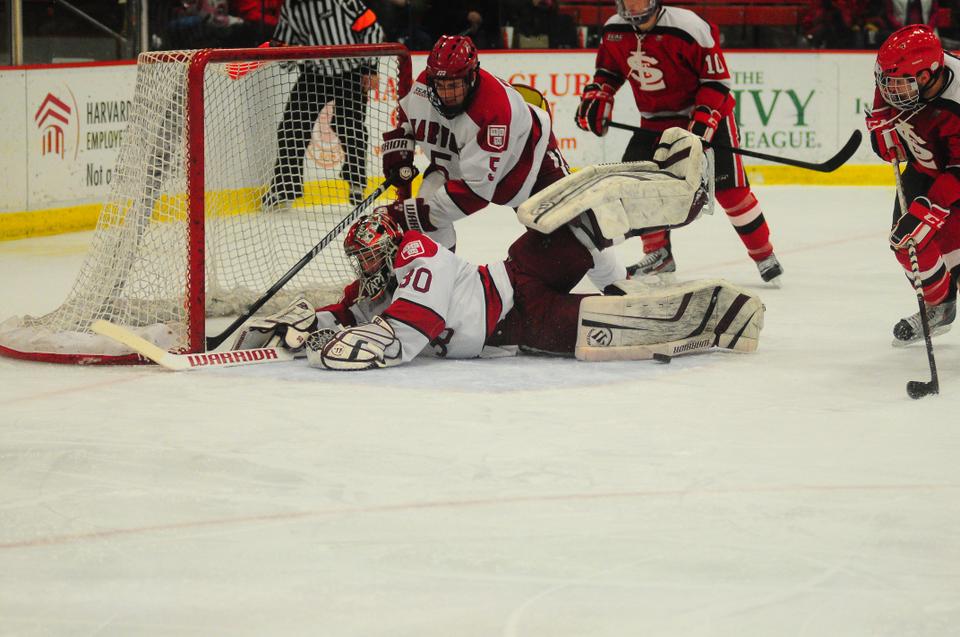 During the first intermission of the Harvard men’s hockey team’s game against Quinnipiac on Feb. 3, Crimson coach Ted Donato ’91 realized he needed to change things up.

Freshman Steve Michalek had surrendered a trio of goals in the opening period to put the Crimson in a 3-1 hole. With a 6-5-8 record at that point, the netminder had enjoyed a solid rookie season, but he wasn’t doing enough to help turn those ties into wins and get his team over the hump.

So Donato replaced Michalek with Raphael Girard, a sophomore who had barely played as a freshman and had struggled in a pair of early-season appearances.

The left-handed goaltender took his place between the pipes as the second period began. By the end of the night, Donato had found his spark, as Girard saved all 26 Bobcat shots fired at him over the final two periods to help Harvard escape the hostile road environment with a 6-3 win.

“I just kept working during practices, even though at some point it was hard to find motivation because Steve was playing so well,” says Girard of his season before replacing Michalek. “It was hard sometimes to find a way to push myself, but I kept on doing that. Maybe that was why I ended up playing against Quinnipiac, because my coach knew I kept working in practice, and that if he put me in there, he had confidence I could make some saves.”

Upon getting his chance, the sophomore did just that, and he continued to make clear over the following month that his hard work had paid off.

Though Donato decided to give Michalek the start in the squad’s next game, the first round of the Beanpot against Boston University, the freshman gave up three quick goals to put Harvard in another early hole. In came Girard, who for the rest of the contest was perfect again—saving all eight shots fired at him by the then-No. 1 team in the country—and Michalek would not get his job back for the rest of the season.

Following that game, Girard sparked the Crimson—which had been picked to finish dead last in the ECAC Preseason Media Poll—to a 3-0-2 record down the stretch, propelling Harvard’s surge up the conference standings.

In two must-win conference home games during the regular season’s final weekend, Girard saved 31 of 32 shots in Harvard’s 4-1 victory over St. Lawrence and 27 of 29 shots in its 3-2 win over Clarkson to help the Crimson earn the No. 3 seed in the ECAC playoffs. With that came a vital first-round playoff bye and home-ice advantage in the quarterfinals.

For his efforts, Girard was named ECAC Hockey Goaltender of the Month in February, in which he had registered a 1.75 goals-against average and a .944 save percentage.

“The guys in front of me really helped me perform well,” says Girard, who finished the regular season with a .933 save percentage, tied for fourth-best in the country. “It’s always encouraging to see guys who put the team’s success in front of their individual success. I was pretty pumped up when I saw guys blocking shots and giving all they could.”

Then came the playoffs, when the goaltender was at his absolute best.

The Crimson lost Game 1 of its first-round playoff series against Yale, 2-1 in overtime, despite Girard saving 42 Bulldog shots. But in the subsequent pair of must-win contests, the sophomore willed his team to victory, refusing to let his team’s season end on its home ice.

In Game 2, Girard stopped 48 of 51 Bulldog attempts, making save after save as the game rolled into double overtime. Sixteen of those stops came in the first extra period alone, when any slip-up by the goalie would have ended Harvard’s season. During that stretch, the sophomore shut the Bulldogs down on two power plays, making seven saves in man-down situations to keep the Crimson alive until sophomore Dan Ford was able to score the game-winner in the second OT.

“[Girard] was outstanding,” Donato says. “His performance, especially in game two in overtime, was incredible.”

Building off the momentum provided by the sophomore’s spark, the Harvard offense scored eight times in Game 3 to make things easier on the goalie, who nonetheless made 39 saves in the Crimson’s series-clinching 8-2 win. The Harvard offense continued to feed off of Girard’s energy in the semifinal, as the netminder denied 18 of 19 Cornell attempts in the Crimson’s 6-1 upset of the No. 13 Big Red.

“You need a goalie that can make saves under pressure,” Donato says. “He made some huge saves. His confidence, his ability to play the puck out of the net, those were all key aspects of the success we were able to have down the stretch.”

All of a sudden, the sophomore who had started the year as a backup had become a star.

“There were a lot of guys that were very happy for him,” Donato says. “He’s a great character in the locker room; he’s liked and respected by his teammates; and he definitely has a little bit of flash and confidence to his game that were a big boost of confidence to the team itself.”

Girard’s stunning run finally came to an end in the ECAC championship game. The goalie was brilliant through two periods, saving all 27 shots he faced from then-No. 6 Union to equal his Dutchman counterpart Troy Grosenick—who would be named a first-team All-American after the season—even though Grosenick only needed to make 10 saves over the same span.

In the third period, Union—a future Frozen Four participant—finally got to Girard, registering two goals to put an end to the Crimson’s season with a 3-1 win (the final score was an empty-netter).

“I really love our seniors,” Girard says. “[In the playoffs] I knew every game could be my last game with them, so I just wanted to [extend their careers] as much as I could. I wish we had made it to the NCAAs just for them, because they deserved it.”

Though it fell just short of its first tournament bid in six years, the Crimson had finally found an answer between the pipes in Girard, who finished 6-3-1 over his final 10 appearances and whose postseason save percentage of .947 was the best in the country.

“We definitely had a good end to the season,” Girard says. “I wish I could’ve played like that the whole year, but we’ve all got our ups and downs.”

But following his breakout performance, from now on, it would appear that Raphael Girard’s career is exclusively on the way up.