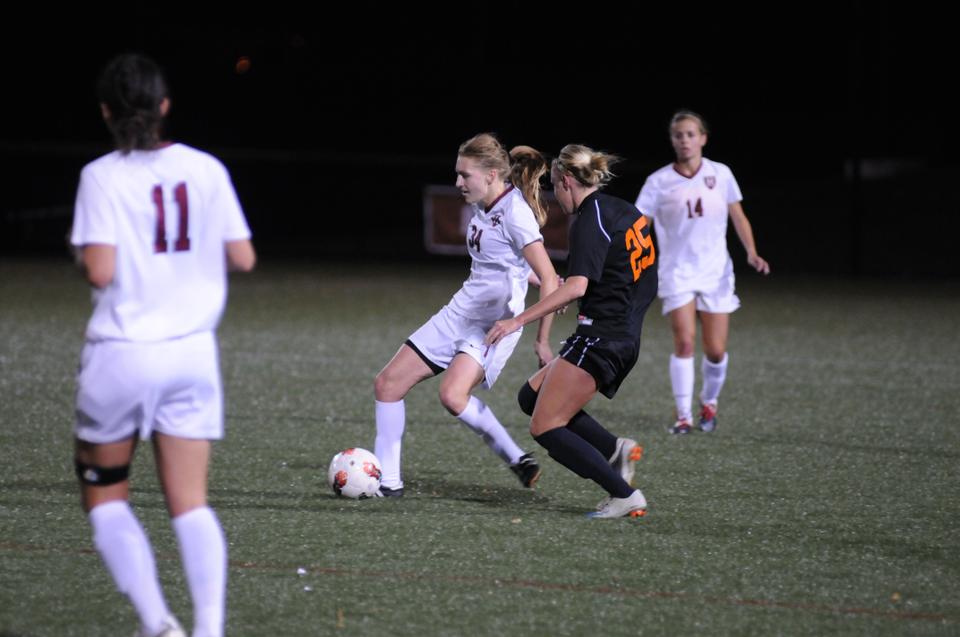 For the third time in four years, the whistle signaling the end of the Harvard women’s soccer team’s regular season also meant that it was time to hoist up some hardware.

As the Crimson defeated Columbia, 1-0, it completed a season that consisted of the team’s best overall record since the 1999 fall campaign.

“It was really, really surreal,” sophomore Peyton Johnson says. “I wasn’t expecting it to feel quite as unbelievable as it did. I’ll never forget lifting that trophy and screaming. It was something special.”

The game’s most climactic moment occurred in only the 21st minute of the opening period, when freshman Lauren Urke knocked in a shot past Lions goalkeeper Lillian Klein. The goal, Urke’s second of the season, would be the only scratch on the scoreboard that day, and Harvard (12-5-1, 6-0-1 Ivy) took the low-scoring match.

“Trying to get the outside-back involved more offensively was something that we had been stressing all season,” explains co-captain Melanie Baskind regarding Urke’s goal. “And it’s always nice to see a freshman step up, especially a defender. You just get that much more excited, rally around her that much more.”

It was a big day all around for rookies as Urke’s classmate, Bethany Kanten, played all 90 minutes in goal, saving her 39th and 40th shots on goal of the year in order to secure sole possession of the Ancient Eight title.

Despite the fact that the Columbia match was on the Lions’ turf, the Crimson’s success this season almost exclusively occurred on its home territory of Soldiers Field. Harvard went 10-1 within familiar Cambridge while putting up a 2-4-1 record when it was the visiting team.

The first five games of the year were a sample of this dual-play. After losing the season-opener at Long Island, 2-1, the Crimson responded in the next two weekends by winning three consecutive games on its home field against Elon, Massachusetts, and Connecticut. Against each of the first two opponents, Harvard scored goals within the last three minutes of the match to break 1-1 ties and keep its early-season momentum alive. In its next away game, the Crimson fell victim to the thriving offense of Boston University and lost, 3-0.

Two days following its defeat at the hands of the Terriers, Harvard suffered its only home loss of the season. This time the opponent was Hofstra and in the Crimson’s highest-scoring game of the season, four goals proved insufficient as the Spirit tallied five and earned the W.

After one more loss, a double-overtime match that lasted two hours and 20 minutes, against Rhode Island, Harvard upped its play and, for the next 49 days, went without a single loss, recording one tie and nine wins.

“[Right before the Rhode Island match] we had a big team meeting,” Baskind says. “We just took a moment to collect ourselves, remind ourselves of what was going to make us successful. From that point on we just rallied around each other and just played our best soccer. That was definitely the turning point for us.”

The spearheads of this streak for the Crimson were none other than Baskind, who tallied six goals and four assists in this ten game period, and Johnson.

On Sept. 23 against Penn, Baskind sunk two shots, both off assists from Johnson, into the back of the net. Two days later, the offensive firepower continued as the team dropped New Hampshire, 4-1, in a game in which Baskind nabbed two assists. In the first game of the next weekend’s doubleheader against Yale, it took a 93rd minute penalty kick from Johnson to attain the overtime victory for Harvard.

After a non-league victory over Fairfax, the Crimson turned back to the Ancient Eight for its meeting with Cornell in Ithaca, N.Y. Despite a goal and assist from junior Aisha Price and five saves from Kanten, Harvard was unable to break the 2-2 tie following a late Big Red goal in the 88th minute.

The next match-up featured another non-Ivy opponent, Siena, who was downed in a quick fashion by the Crimson. But Brown was not so easy to dismiss. It took two goals within a five-minute span from Baskind and freshman Mai Le to earn a come-from-behind win over the Bears.

Against Princeton, a week later, the duo of Baskind and Le once again proved detrimental to Harvard’s counterparts as the two scored back-to-back goals once more to take a decisive lead and ultimately, the match.

In the Crimson’s game against Dartmouth, though, it was all about Johnson. The score was tied at the 89:50 mark, 1-1, when the referee’s whistle blew, calling a foul on the Big Green. Seconds later, the ball was in the back of the net as Johnson drilled a free kick from 20 yards away only moments before regulation ended. With that shot and that win, Harvard clinched at least a partial share of the Ivy Championship and a bid to the NCAA tournament. It would be Johnson’s fourth and final goal of the season.

“I think for 15 minutes straight afterwards I couldn’t say any words, I just screamed. Anybody would say my name, and I would just yell,” Johnson says. “We were all numb, I put on my jacket afterwards, and I couldn’t feel it on my arms. We were just dancing in the locker room, numb and pink-skinned. I’ll never forget that. That was really just this season in a moment for me.”

Following Urke’s goal in the dramatic regular season finale against Columbia, the Crimson’s next destination was the first round of the NCAA tournament against Boston University, a team that they had lost to earlier in the season. But that is where Harvard’s journey would end in 2011 as the offensive prowess of the Terriers dominated and, once again, was able to give the team a 3-0 victory over the Crimson.

Baskind was unanimously named Ivy League Player of the Year and earned All-Mid-Atlantic honors, while Johnson and co-captain Lindsey Kowal were elected onto the All-Ivy First Team. Senior Becca Millock and freshman Meg Casscells-Hamby were named to the second team.