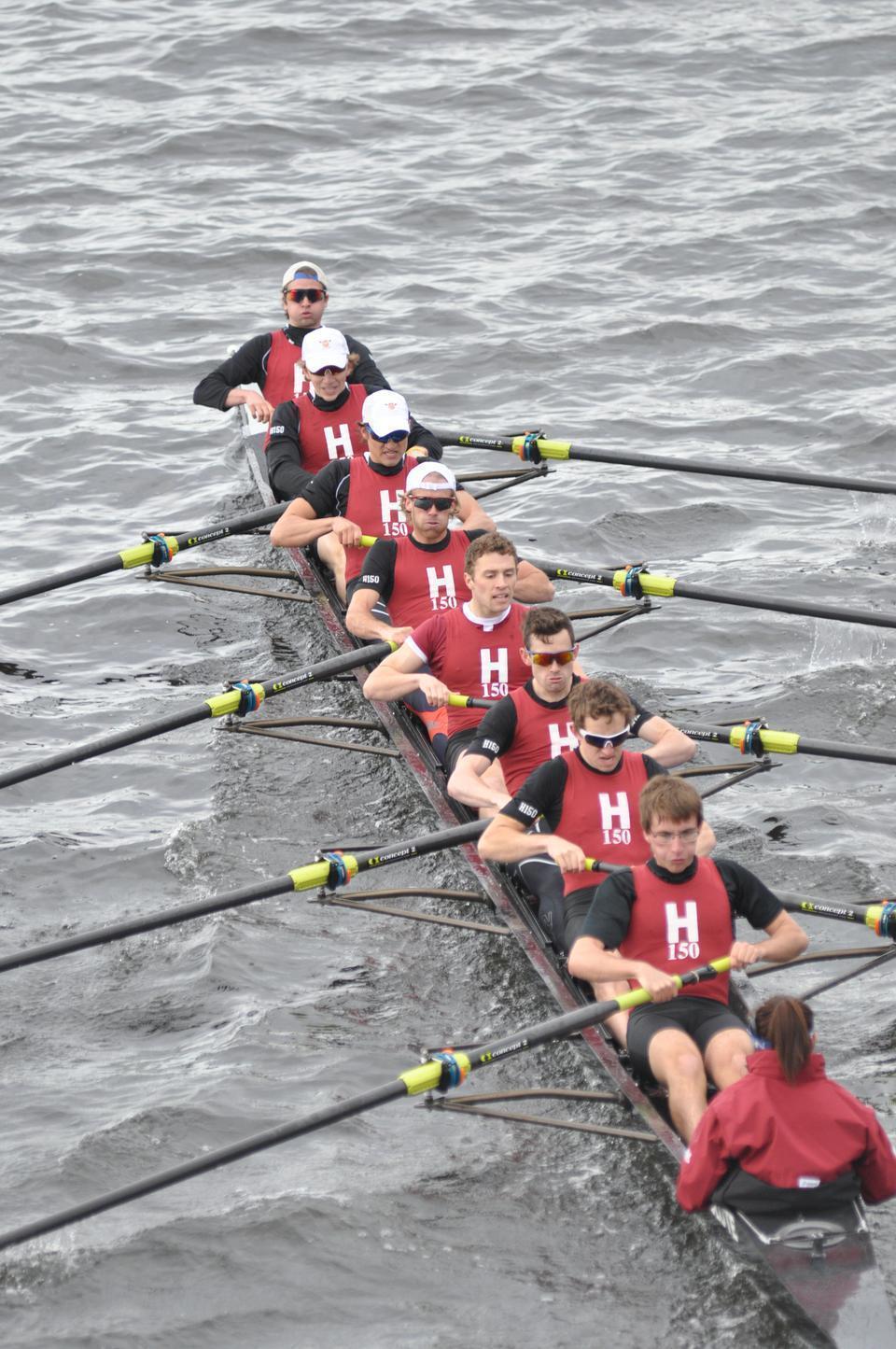 After disappointing conclusions to its previous two seasons, the Harvard lightweight varsity eight, shown here in earlier action, finally broke through in 2012, winning its first national title since 2003 at this past weekend's IRA National Championships.
By Christina C. Mcclintock, Crimson Staff Writer

For two straight years, the Harvard lightweight varsity eight flirted with perfection only to be defeated on the biggest stages. First there was the 2010 crew, which finished the dual season unbeaten only to take silver at EARC Sprints and bronze at the IRA National Championships. Next there was the 2011 boat, which matched its 2010 counterparts in the dual season and got the job done at Sprints but finished a mere .02 seconds shy of a national title.

But this year’s 2012 crew was just too fast. And for the first time since 2003, the Crimson rowers got to stand on the medal dock as national champions after a victory at this past weekend's IRAs on the Cooper River in Camden, N.J.

“I’m so happy we were able to get it done the way we did,” senior coxswain Angela Chang said. “Having that loss [last year] motivated us to have a really hard training season. It really paid off.... It feels great to see everyone’s best and find our top speed and come out on top.”

It was a season Harvard dominated from start to finish, with fall victories over its collegiate counterparts at the Head of the Charles and the Princeton Chase to set the tone early. It also found the right lineup early, with the IRA boating identical to the lineup that raced the Charles.

“I think from the beginning, there were obviously high expectations,” Chang said. “We found speed and rhythm from the beginning, from the fall. We were able to continue improving throughout the season. There was never any hint of complacency. People just wanted more and more.”

Each year, it was a different school that played the role of the heartbreaker. In 2010, it was Princeton who took Sprints and IRAs, with Navy taking silver at IRAs. Last year, Yale edged out the Crimson for the national title.

This year, it was Dartmouth who stood the best chance. The Big Green took silver at Sprints, finishing two seconds off Harvard, and were only .1 seconds behind the Crimson in the morning’s race for lanes.

But in the grand final, Harvard made its move in the second 500 and never looked back.

“We definitely wanted to attack that [500],” said senior six seat Tim Moore. “Such a strong tailwind makes a really short race. You don’t want to wait around for everything.”

That 500 gave the Crimson a lead of around five seats at the 1000-meter mark.

“That’s when I knew we had to hold on to it but knew that they’d be moving in the last 500,” Chang said.

The Big Green did indeed move, but Harvard held on for a win of almost a second and a new lightweight course record with a time of 5:33.059.

“I think in the last 500, they were definitely taking a few seats, [but] we kept to our time and held them off,” Moore said.

“We were in control the entire race,” Chang added.

It was a perfect ending for Moore, the only athlete to have raced in the 1V all three years.

“To take a win, since that has been elusive, is definitely a good feeling,” Moore said. “I have my cap off to the rest of my boatmates.”

Moore was joined in the 2011 season by Chang and co-captains-elect Matt O’Leary and Erich Schultze, both rising seniors.

It has been a particularly good year for the Newell family, as Alex’s older brother Will ’11 qualified to race in the London Olympics in the lightweight straight four, while mother Nelia ’79 was a member of the coaching staff for the Radcliffe lightweight team that earned an IRA medal in the 1V race for the first time since 2006.

Rounding out the boat was bowman Michael Wales, the crew’s lone sophomore. Wales stroked the 2011 freshman eight and rowed for the US U23 quad with O’Leary, Newell, and Schultze.

“The group of guys is pretty remarkable,” Moore said. “We all work hard, we’re all committed to pushing ourselves individually. We are a lot of fun, there are a lot of characters in the boat.... I think it’s pretty key to...not take yourselves too seriously.... I think this boat has embraced that balance.”

The Crimson’s other boat, the lightweight four, which was composed of rowers from this year’s freshman eight, was unable to replicate its 2011 success. Harvard finished fifth overall after taking second in the heat.