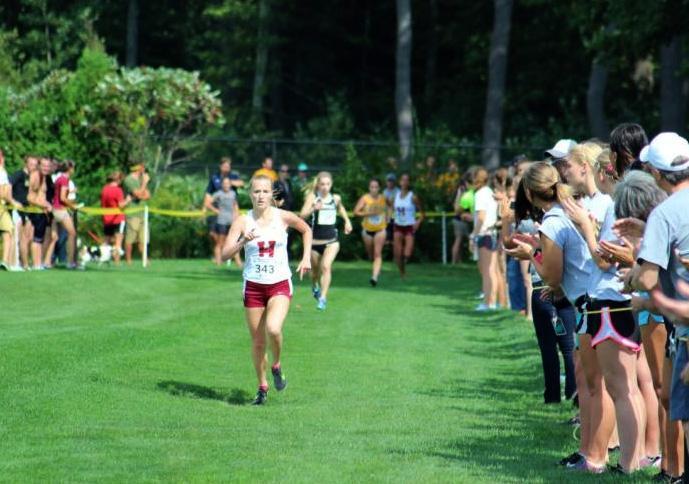 After sitting out due to various injuries for the first three years of her college career, senior runner Briana Jackucewicz finished first in a field of 183 at the Nassaney Invitational. With the win, the senior pushed the Harvard women’s cross country team to a first place finish overall.
By Dominic Martinez, Crimson Staff Writer

At first glance, there appears to be nothing uncommon about senior Briana Jackucewicz’s victorious performance for the Harvard women’s cross country team over the weekend. A four-year veteran rose to the occasion and led her team to a win, capturing an individual title in the process.

But a closer look at what happened on Saturday at the Nassaney Invitational in Smithfield, R.I., will reveal that Jackucewicz’s outing was far from ordinary.

Though the Howell, N.J., native was recruited to run cross country for the Crimson, a slew of injuries kept her out of competition for the entirety of her first three seasons.

After citing the injuries to her hip, knee, ankle, hamstring, and foot in her speech as part of the Lowell Student Speaker Series last year, Jackucewicz remarked, “Here I am, a junior, yet to race with an H on my chest.”

On Saturday, when she finally had the opportunity to don the crimson H, Jackucewicz put her talents on display. The senior won the women’s five-kilometer race, finishing in 18:00.1, more than five seconds faster than the second-place runner.

“She’s had a tough go,” Harvard coach Jason Saretsky said. “But she’s an incredibly resilient young woman, and I was unbelievably impressed with her ability to stick with this and fight through that adversity to have such an outstanding opener. It was really great to see.”

Saretsky and his staff recruited Jackucewicz, who began running when she was just six years old with her older sister, Leisha, and her father, Roger, who ran for Lehigh University.

She appeared to share her father’s talent from an early age, setting the national high school record in the indoor 5k when she was just a seventh grader. Only 13 years old at the time, Briana averaged a blistering 5:23-mile pace to finish in 16:43.

With the consent of her coaches, Jackucewicz recently decided to return to the high-mileage training plan that she followed when she was in high school. After running between 60 and 80 miles per week this summer, she has already begun to feel the difference.

In addition to logging heavy mileage over the summer, Jackucewicz competed in a number of road races to see how her training was progressing. Even with this racing experience, the senior acknowledged that she had a different feeling before the gun was fired to begin Saturday’s meet.

“I don’t usually get nervous for races,” Jackucewicz said. “That being said, it’s very different to run against middle-aged men and women in a road race than it is to run against your peers in a college race.”

But the senior was able to shake off her pre-race jitters on Saturday, taking the lead in the first mile with a 5:27 split. She indicated that the team’s strategy before the race was to cross the first mile marker at around 5:30.

“I didn’t expect to lead the race,” Jackucewicz said. “It just kind of happened that way.”

When a pair of runners caught up with her in the second mile, Jackucewicz was able to pick up her pace down the stretch and take home the individual title. She averaged 5:47 per mile en route to the victory.

Jackucewicz’s teammate and roommate in Lowell House, senior Samantha Silva, was the Crimson’s third finisher, running a time of 18:23.6 to capture fifth place. Another four-year member of the squad, Silva witnessed her roommate struggle through three injury-plagued seasons to arrive at this moment.

“It was difficult to see your teammate and one of your close friends go through that,” Silva said. “Bri has gone through a lot, but it almost makes it sweeter to see her come back and race so well. We’re all so proud of her.”

With Jackucewicz back in top form, Silva is confident her roommate will continue to be a force to be reckoned with, both in Ivy League cross country and beyond.

“Obviously her body hasn’t worked as well with her these last couple of years,” Silva said. “But I think it was just a matter of figuring out what training works for her…. Now that she knows, I honestly feel like the sky is the limit [for Briana], even after graduation.”

—Staff writer Domenic A. Martinez can be reached at dmartinez@college.harvard.edu.