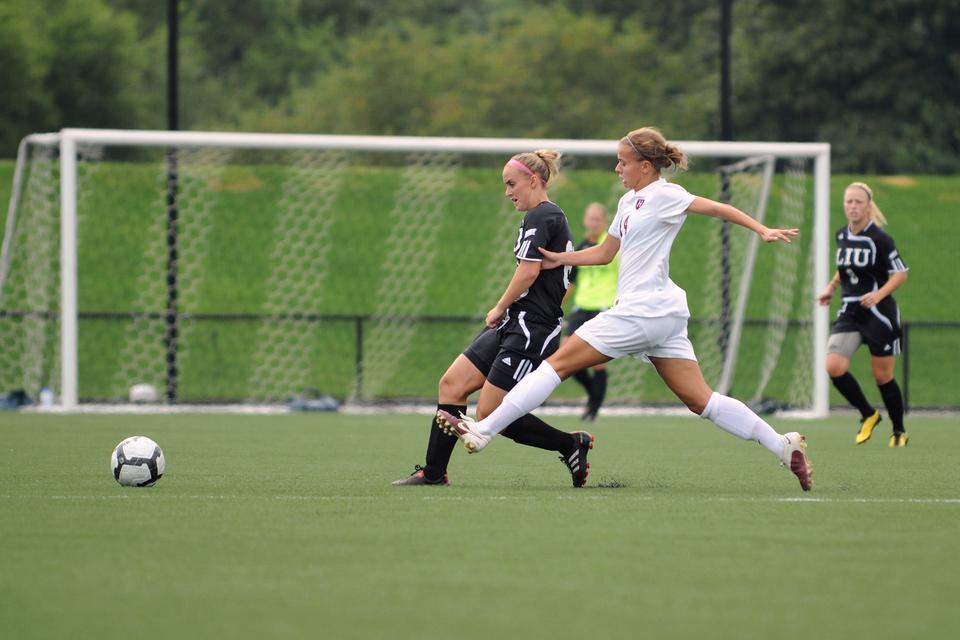 When Taryn Kurcz’s tip in off of a free kick from Peyton Johnson found the back of the net in the 73rd minute, the Harvard women’s soccer team believed it had a shot at a come-from-behind victory.

But the Crimson, down 2-1 following Kurcz’s score, could not complete the comeback. The team allowed a goal 1:31 later, and Harvard fell to Dayton on Friday night at Soldiers Field Soccer/Lacrosse stadium, 3-1.

The game was delayed by an hour due to lighting in the area, and the Flyers (4-3) came out looking much sharper than Harvard in the opening minutes of the match.

Dayton had five shots in the first 10 minutes of the game, and the team scored its first goal in the 11th minute. Crimson sophomore goalkeeper Bethany Kanten was called for a foul inside the penalty box, and the Flyers’ Colleen Williams converted on the penalty kick, firing a shot into the top left corner for her fifth goal of the season.

After escaping the initial flurry of activity down by one, Harvard eventually found its footing around the 20th minute, and the game became a much more even contest.

“I think that we definitely bounced back [from the early goal],” said Johnson, a junior co-captain. “After that, we were able to put on some hard pressure and be able to play with a lot more intensity than we had in the beginning. Unfortunately, it did take those first 20 minutes of being asleep before we stepped it up.”

Johnson was able to generate the most offensive pressure for the Crimson in the first half. The midfielder led the team with three shots on target, including the best scoring chance for Harvard of the opening period. With 17 minutes left in the half, Johnson ripped a shot from 30 yards out that was only narrowly saved by Dayton keeper Jordin Melchert, who tipped the ball over the crossbar.

Despite being outshot by the Flyers, 13-8, the Crimson had the final attempt of the first half. In the 43rd minute, sophomore forward Meg Casscells-Hamby, who led Harvard with eight shots in the game, blasted a shot that went just wide.

In the second half, the Crimson came out much more aggressively than it had in the first, firing off four shots in the first 10 minutes. But Dayton, unlike the Crimson, managed to capitalize on its opportunities early in the second frame. The Flyers’ Nicole Waters delivered a pass up the middle to Juliana Libertin, and Libertin beat Kanten, firing a shot into the left side of the net in the 55th minute.

Eighteen minutes later, the Crimson broke through. After some physical contact from Dayton, the Crimson was awarded a free kick in the Flyers’ half. Johnson played the ball on the ground into Dayton’s penalty area, and after a couple of deflections, Kurcz was able to take possession of the ball and find the back of the net. The score brought the Crimson within one of the visiting Flyers.

This was the third goal in the last two contests for Kurcz, who is a Crimson sports executive, making her the leading scorer for the Crimson.

“[Kurcz] always plays with incredible intensity,” Johnson said. “She always brings everything in practice and in games. It’s awesome for her and for us...that [her] intensity is turning into goals.”

It was also Johnson’s third assist in as many games, although the junior is quick to point to her entire team’s hard work as reason for her success.

“We’ve had a lot of commitment as a team on set pieces, which is how I’ve been able to help contribute,” Johnson said. “I think that it’s really more of a testament to the team working.”

Less than two minutes after Kurcz’s goal cut the Flyers’ lead in half, Dayton went back up by two when Stephanie Emery passed it to Nicole Walters, who netted the ball from 10 yards out.

The two-goal deficit proved too much for the Crimson to overcome, and Harvard suffered its first loss of the 2012 season.