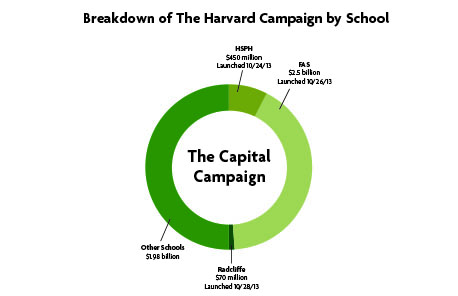 Wallach also announced that the Institute has already raised $26 million, or 37 percent of its goal. According to Radcliffe spokesperson Alison Franklin, that figure represents the sum of 8,123 gifts.

These donations to Radcliffe are counted as part of Harvard’s $6.5 billion University-wide campaign, of which Radcliffe’s goal represents a little more than 1 percent. The Institute is the third University-affiliated body to launch its fundraising drive in the last week. The School of Public Health formally launched its campaign on Thursday, and the Faculty of Arts and Sciences just concluded a weekend of launch festivities.

At an address delivered at a dinner Monday night for donors and supporters in Radcliffe’s Knafel Center, Radcliffe Dean Lizabeth A. Cohen unveiled the Institute’s fundraising priorities, which emphasize collaboration across the University, increased engagement between Radcliffe fellows and Harvard students, and the diversification of the Institute’s programming and research funding.

“We must continue to support advanced study, for the sake of those eager to undertake it and for the sake of our society,” Cohen said, according to her prepared remarks.

Monday’s events began with a dedication ceremony of the Institute's public garden, now named in honor of Wallach and her husband, Kenneth L. Wallach ’68. In addition to the garden dedication, Cohen introduced several art exhibitions, which attendees viewed during a subsequent reception.

A cocktail event later in the evening featured a speech from University President Drew G. Faust as well an address by Tarik O’Regan, a composer who spent a year as a fellow at Radcliffe in 2005, and a short musical performance.

A number of prominent Harvard figures attended the event along with Faust, including FAS Dean Michael D. Smith, Harvard Corporation member Paul J. Finnegan ’75, and prolific donor Sidney R. Knafel ’52, who serves as a co-chair for the University-wide capital campaign as well as for the Radcliffe fundraising effort.

Faust, who served as Radcliffe’s first dean from 2001-2007, told the crowd of about 100 that, as President, she has not forgotten the lessons she learned while leading the Institute.

“A lot of what Radcliffe is and represents has had so much influence on how I thought about the broader University, and what it could be and what it should be,” Faust said.

She said that “One University,” a phrase referring to an interconnected, interdisciplinary campus that she and others have used to describe her vision, is a concept conceived from her work at Radcliffe.

“Bringing the strengths of the University together across many fields, many schools, many disciplines, to make each of us stronger than we would be on our own—this really became part of my understanding of what Harvard could do when I arrived here at Radcliffe,” Faust said.