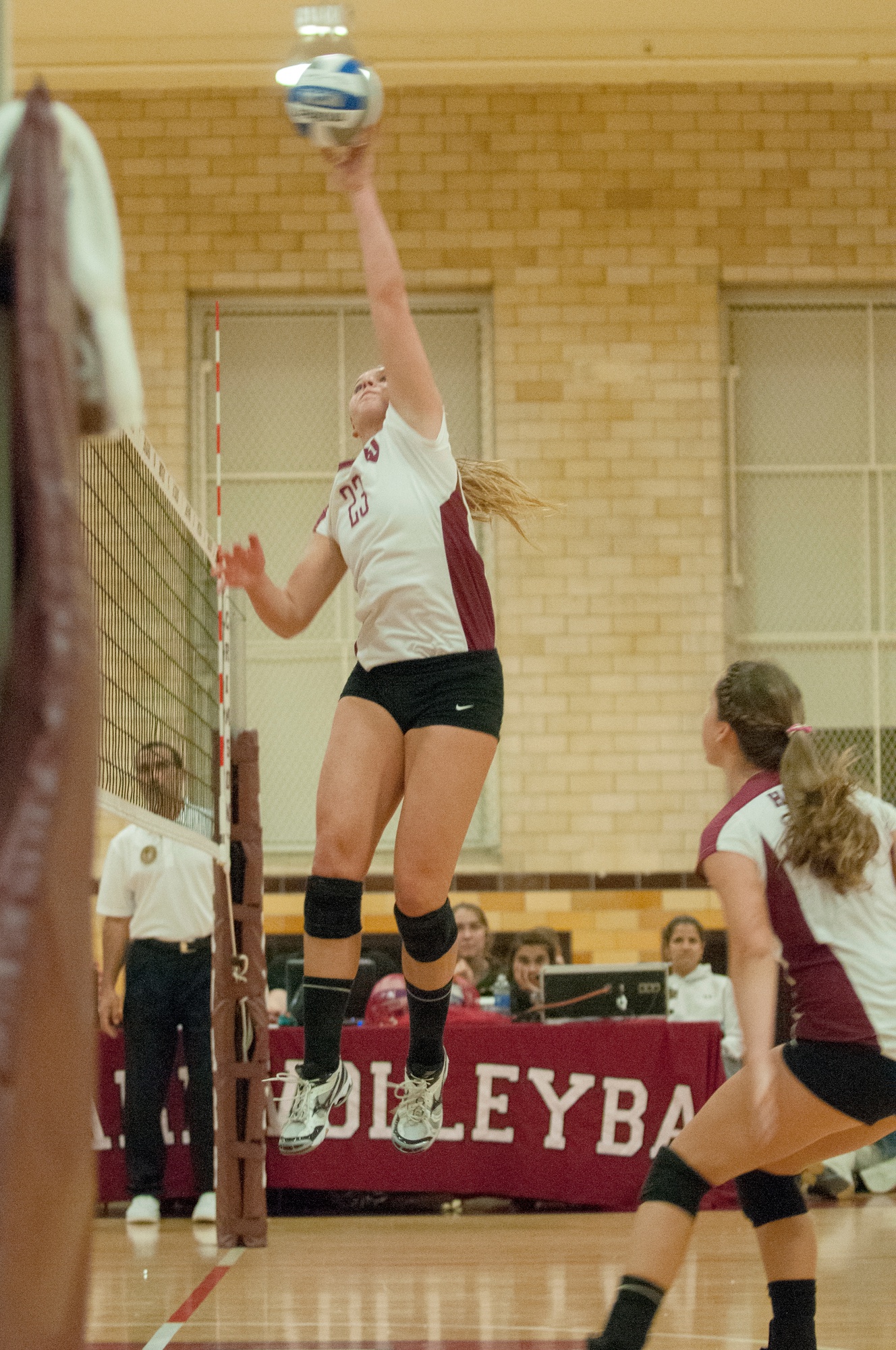 Freshman Corinne Bain put the finishing touches on a stellar rookie campaign in which she became the first Harvard women's volleyball player to register a triple-double, a feat she accomplished six times.
By Patrick Xu, Contributing Writer

Although the league title was out of reach, the Harvard women’s volleyball team stepped on to the court at the Newman Arena on Saturday evening knowing that a win was necessary in order for it to secure second place in the Ivy League.

Coming into the final matchday of the season on Saturday, the Crimson (14-9, 9-5 Ivy) was tied with Penn for second in the Ivy League. Ultimately, the Quakers fell to Ivy-champions Yale, while Harvard was able to dominate Cornell (8-16, 4-10 Ivy) in a three-game sweep to take sole possession of second.

“I’m very proud about how we responded against Cornell, especially coming off our loss against Columbia”, sophomore outside hitter Kathleen Wallace said. “We definitely focused our energies and played much more efficiently against Cornell.”

The Crimson featured a balanced attack on offense, with sophomore middle blocker Caroline Holte leading at the net with 10 kills and five blocks. Due largely to the quick three set match, freshman setter Corinne Bain narrowly missed out on her seventh triple-double of the season, falling two kills and a dig short. Senior right side hitter Erin Cooney and co-captain Natalie Doyle both made significant contributions in their final games in the Crimson uniform, as Cooney chipped in four kills and Doyle added nine digs.

Despite being swept, the Big Red still put up a fight. Sophomore right side Breanna Wong led the team with nine kills and 15 assists, and freshman setter Alyssa Phelps chipped in a game-high 30 assists of her own.

In the end, the Crimson won because it was able to take advantage of situations and take control during tight situations. The teams were stuck 13-13 in the first set before Harvard eventually took control with strong play by Holte. In the second, the team took advantage of a 7-1 run to take the set after being tied at 12-12. In the third and final set, the Crimson broke the game open with a 7-0 run to take a decisive 17-9 lead.

“Next year we’ll continue to build and work towards that Ivy League championship, because I definitely think it’s achievable for us,” sophomore outside hitter Jennifer Schults said. “It’s definitely what we’re going to go towards.”

“It proves that the Harvard volleyball team is capable of contending for the Ivy League title next year,” Wallace added. “As much as I’m sad that the season’s over, I’m really looking forward to the future as well.”