Propelled By An Early Start, Women's Hockey Takes Down Colgate, 5-2 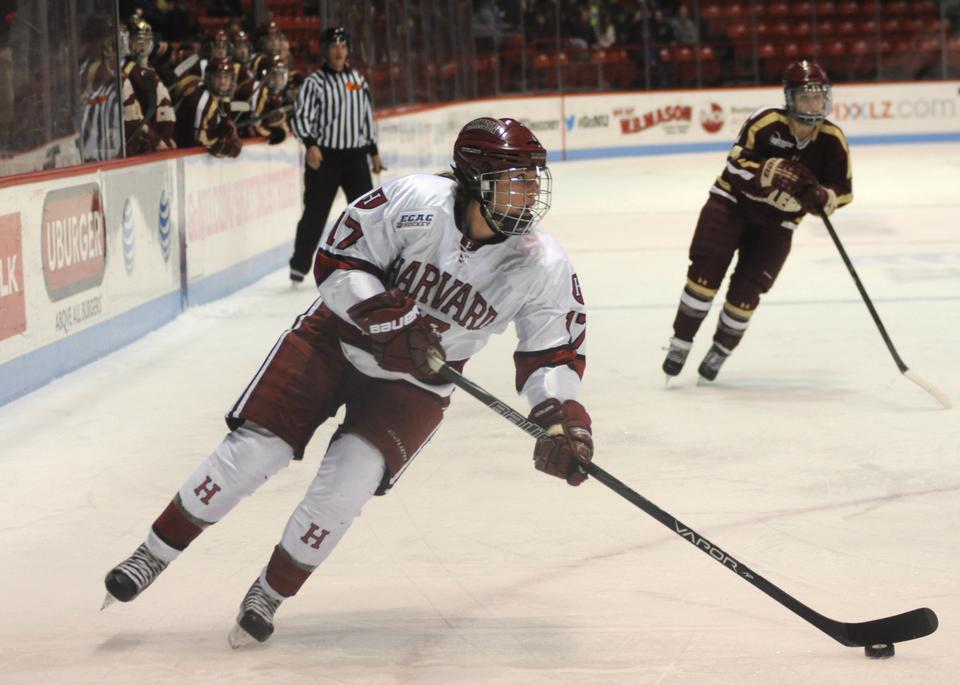 Senior Kaitlin Spurling tallied two goals and an assist in the Harvard women’s hockey team’s 5-2 victory over Colgate Saturday. Spurling and freshman Mary Parker both registered early goals to give the Crimson a 2-0 lead and help it bounce back from Friday’s loss to Cornell.
By Claire K. Dailey, Crimson Staff Writer

Just over three minutes into the game, the Harvard women’s hockey team had already netted two goals and set the tone for its match against Colgate (9-19-3, 4-13-3 ECAC) Saturday night at Starr Arena. The Crimson (19-4-2, 15-2-1) bounced back from a Friday night loss against league rival Cornell to top the Raiders, 5-2.

“I think we had good balance [and] good shots in the net,” Harvard coach Katey Stone said. “They worked hard and created penalties off of speed.”

Freshman Mary Parker capitalized on a Colgate cross checking penalty 21 seconds into the contest. The forward’s score was assisted by senior Kaitlin Spurling, who followed up less than two minutes later with a goal of her own.

A Raider hooking penalty led to another power play opportunity for Harvard. Spurling found the back of the net off of a rebounding shot from sophomore Michelle Picard. The senior forward has had just two other matches in her career with multiple goals.

“The second power play unit has really stepped it up [by] putting pucks in the net,” co-captain Jillian Dempsey said. “And I think it’s just because of us moving the puck really well.”

The first period of play included a Colgate goal from Brittany Phillips, assisted by Megan Wickens. The Crimson suffered two penalties at the end of the frame, but Harvard was able to shut out the Raiders’ power play for the two minutes that stretched into the second stanza.

“One of the key things we wanted to do was get to the net [and] get in the goalie’s face, put pressure on her, [and] create rebounds,” Dempsey said.

Harvard more than doubled the number of shots on goal attempted by the Raiders, 35-16.

“We have a pretty potent offense and it’s a matter of getting there,” Stone said. “We did a better job of that, getting on the goaltender and taking some shots. We’re trying to improve our game and not [make] too many changes.”

The Crimson was called for two consecutive penalties at the end of the second frame, giving Colgate a five-on-three opportunity. The Raiders were able to convert on their final power play, when Katie Case used a rebound to put the puck in the back of the net.

Colgate was able to connect on only one of six power play opportunities.

Junior Kalley Armstrong potted the last goal of the match off of a feed up the middle from sophomore forward Hillary Crowe, marking Crowe’s fourth consecutive game with a point. Armstrong’s shot brought the final score to 5-2 seven minutes into the third period.

“We made [it] a focus right away, to get pucks in the net and get going,” Dempsey said. “ We don’t like losing, and so we had that extra fire going right off the bat.”

The Raiders were unable to get any shots off throughout the entire third frame. Co-captain Laura Bellamy produced 15 saves in the game and gained her tenth straight win, bringing the goaltender’s record to 11-1-1 on the season. Bellamy and the rest of Harvard’s seniors have never dropped a game to Colgate throughout their Crimson careers.

Harvard is facing its final four regular season conference games at home at Bright Hockey Center. Both Dempsey and Stone have the potential to set personal records in the season’s homestretch. Dempsey remains one point away from breaking into the Crimson’s top 10 career point scorers and Stone needs only three wins to reach the 400 mark of her career.

“We’re looking forward to being home,” Stone said. “We’re hoping that we’re going to have a good fan base in the building because we’re certainly going to need it. It feels like we haven’t been home in a long time.”

Harvard, which hosts Brown this Tuesday, can earn home ice for the entirety of the ECAC tournament if it wins out.

“I can’t believe that it’s already at this point being a senior,” Dempsey said. “I’m looking to just go out there, work extremely hard, make the most of it, and savor these moments.”

—Staff Writer Claire K. Dailey can be reached at ckdailey@college.harvard.edu.