After Fatal MIT Shooting, A Police Chase and Chaos in Cambridge 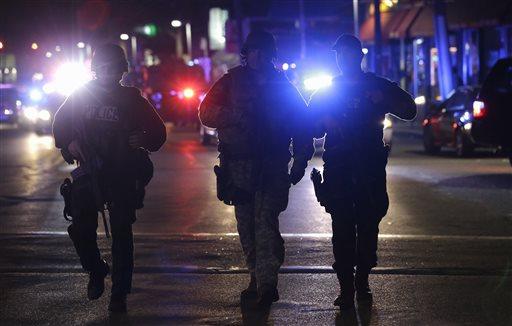 Officers wearing tactical gear arrive in Watertown on Friday, April 19, 2013. Reports of explosives being detonated and police are telling reporters to turn off their cell phones. Dozens of officers and National Guard members are in Watertown, where television outlets report that gunfire and explosions have been heard.
By Nicholas P. Fandos and Samuel Y. Weinstock, Crimson Staff Writers

One of those men has been shot and killed by law enforcement, officials said. As of press time, the other was armed and at large.

In an impromptu press conference convened shortly before 4:30 a.m. Friday morning, Massachusetts State Police Colonel Timothy P. Alben told reporters that a series of events that began Thursday evening with the murder of an MIT police officer may have led law enforcement officers to two men identified in surveillance footage from near the bombing sites.

In a statement released early Friday morning, the Cambridge Police Department wrote that they received a report around 10:20 p.m. Thursday that shots had been fired on the MIT campus. When they arrived on the scene at 10:30 p.m., CPD found an MIT officer with multiple gunshot wounds in his car. He was transported to Massachusetts General Hospital, where he was declared dead, according to the Middlesex County District Attorney’s Office.

CPD launched an immediate investigation and “determined that two males were involved in the shooting,” the statement said.

Cambridge police also received reports of an armed robbery at a 7-Eleven in Central Square at 10:30 p.m. Shortly thereafter, they said, an armed hijacking occurred around Third Street in Cambridge, when two male suspects held the owner of the car, a Mercedes SUV, at gunpoint. The car owner was released roughly a half hour later at a gas station off Memorial Drive.

When the stolen Mercedes was spotted in Watertown by police in that area, Alben said, a mass chase ensued as CPD, Massachusetts State Police, and the FBI joined the effort. It ultimately resulted in a firefight between law enforcement and the two suspects, who threw explosives and traded gunshots from their vehicle.

One suspect was shot and taken into custody in the East Watertown area. The other remained at large, and heavily armed, at press time. Davis would not confirm if the suspect was dead or alive. One MBTA Transit Police officer was shot an gunfire exchange and was believed to be alive as of press time early Friday.

Alben identified the suspect at large as the same man suspected of helping to carry out Monday’s bombing and seen wearing a white hat in surveillance video from the marathon. The “suspect in the white hat,” is thought to be a caucasian male with curly brown hair and wearing a grey-hooded sweatshirt. Officials said he should be considered to be heavily armed.

He added that police would begin a door-to-door, block-by-block to search of Watertown for the suspect. The Massachusetts State Police Bomb Squad was deployed early Friday as well, to search the area for any explosive devices, CPD said.

Though Faculty of Arts and Science spokesperson Jeff Neal said early Friday morning that no direct threat was ever posed to Harvard, students watched as dozens of police cars raced between Cambridge and Watertown. Many reported hearing gunshots from neighboring Watertown.

Throughout the night Harvard students banded together in support of each other, offering up their extra beds and couches to stranded students over House email lists.

As of press time, Harvard students had received eight MessageMe updates, starting at 11:33 p.m., alerting them to the situation on MIT’s campus and on Harvard’s campus. The most recent alerts, sent just before 5 a.m. Friday, warned students to avoid the Watertown area and emphasized that HUPD would continue its heightened level of security on campus.

MIT announced shortly after 5 a.m. Friday morning that it had cancelled Friday classes due to the death of a University police officer the night before.